By now, you've probably seen the video. A white woman pulled a gun out on a black mother after a disagreement spiraled into a full-on shouting match in a Chipotle parking lot in Orion Township. With every story that has layers of race involved, the incident made international headlines. The preliminary result of the combustible scene was the woman and her husband were both charged with felonious assault.

While two videos captured different angles, with one beginning with the woman - now identified as Jillian Wuestenberg - pointing a gun straight at the mother holding the camera, and another revealing the origins of the argument, the suspects say there's far more to the story. "Death, fear, confusion, I don't know, why, it got to where it is," Jillian said. "But just utter terror."

That's how Wuestenberg felt in the events leading up to her pulling a gun out. Along with her husband Eric, who both discussed their side of the story. After Jillian bumped into the black mother's 15-year-old daughter leaving the store, she said they were blocking her from her car. She said she felt trapped with a railing behind her. "I was being yelled at, berated, called a racist and ignorant, and I was trapped."

After the black woman threatened to kick the couple, Jillian said she felt compelled to calm the situation. In the video, she can be seen saying "I care about you. Am I am sorry if you..." As the couple's car began to back up and leave, its automatic braking system suddenly stopped - at least one of the women was banging on the car.

That's when Jillian said she feared for their lives.

"At that point I realized we're not going home tonight, we're not going to see another day, and the only thing I can do is protect myself and I draw my firearm," she said.

"I believe the actions that these two fine people took, were not only justified but they were necessary in order for them to go home to their kids," said attorney Terry Johnson.

The other family never brandished any weapons in the process. Since being charged, Eric was fired his job at Oakland University as a coordinator for Veteran Support Services and Jillian had just received a text she had lost her job at Hallmark.

Police-free zone set up on Jefferson

For about an hour on Thursday, Detroit got its own taste of a literal interpretation of what 'Defund the Police' would look like. It was peaceful, there were no arrests, involved about 30 demonstrators, and blocked traffic on to Belle Isle for about an hour.

A group calling itself 313 Liberation Zone set up what they called a police-free autonomous zone. It featured basketball, four square, hopscotch, and jump rope.

The group was calling for money to be taken out of the Detroit Police budget and re-allocated to the Parks and Recreation Department.

A much larger version of this scenario was put on display in the CHOP zone - the Capitol Hill Organized Protest which was started in Seattle, Washington. For almost a month, residents occupied the Capitol Hill neighborhood of the city, which covered six city blocks and a park. It was disbanded after multiple fatalities that were the result of shootings happened.

Westland Police are still working to identify the men involved in a shooting that happened at the mall Thursday. According to police, two to three men got into an argument at the European Perfume Store.

Investigators are still working to identify the individuals men involved in a shooting that happened at Westland Mall Thursday. Police say two to three men got into an argument in one of the stores before one open-fired.

One man open-fired on the other. While shoppers say they heard several shots were fired, employees report only hearing two.

No one was hurt, but when the shots were heard, people in the mall fled. One employee led customers out the back door during the scene.

Police have yet to release a description of the suspects involved and are still searching for them.

Parents, 4-year-old hospitalized after head-on collision on city's west side

Two women are in critical condition and a child is in serious condition following a two-vehicle collision on the city's west side.

Around 2:30 a.m., a large scene of police and firefighters were dispatched to 7 Mile, just west of Greenfield for a head-on crash between a white SUV and a red sedan.

Detroit Police say the white Infinity SUV was traveling on 7 Mile when it collided into the red sedan that was exiting a gas station. The crash resulted in two women who are both listed as Jane Doe were in critical condition. The child is now in stable condition. 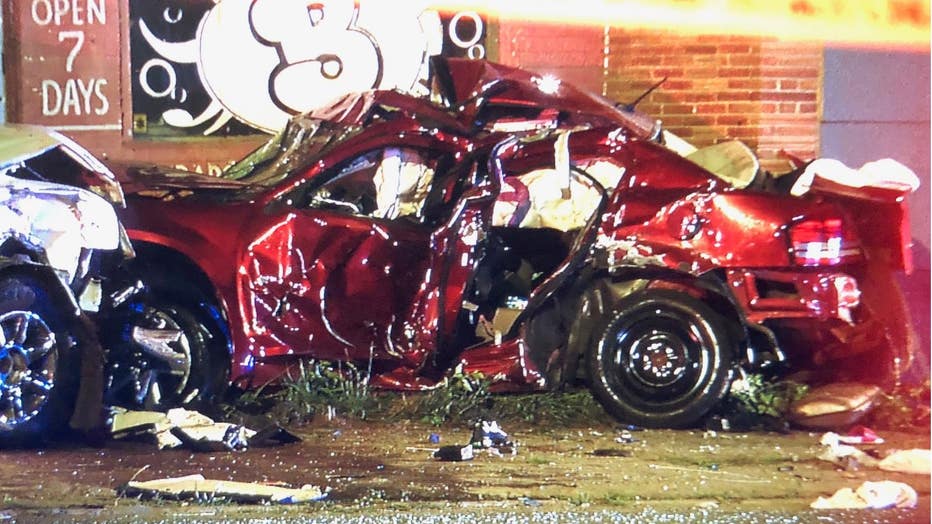 The driver fled the location on foot.

After a brutal stretch of heat over the last nine days, scattered storms are expected to cool down the region on Friday. Weekend temperatures will fall to the 80s.

Friday cold front will drop some storms and then our temps.

Highs in the 80s for the weekend!

The Big Ten Conference announced Thursday it's moving to a conference-only schedule for all fall sports for the 2020 season due to concerns related to the Covid-19 pandemic.

For U-M, that means games with the University of Washington, Ball State, and Arkansas State will be canceled. MSU had non-conference opponents Toledo, BYU and University of Miami.