(FOX 2) - The record-breaking snow that fell in southeastern Michigan Monday has come to an end and now it's time for the main event: Record-breaking cold.

Areas across the Midwest, Detroit included, are set up to shatter another record on Tuesday. Amid hundreds of school closings, we will see some sunshine but don't let it fool you - it's cold out there. And the coldest we've seen in November in a while.

Derek Kevra has the latest forecast of this record-breaking cold in November.

The National Weather Service said Tuesday and Wednesday may see record cold from the southern Plains to the Mississippi Valley to the Great Lakes and beyond, thanks to what it calls an "arctic airmass" that started in Siberia and has been spilling over a big chunk of the Midwest and East Coast.

Records are expected to be broken in Chicago, as well. Weather service meteorologist Kevin Birk said the high for the Windy City is expected to reach 21 degrees, which is seven degrees lower than the previous record set for Nov. 12. Low temperatures in Illinois, Wisconsin and Iowa could drop into the single digits.

In Minnesota, Monday was the coldest high temperature in three decades in the Twin Cities at 18 degrees and some Minnesota lakes were freezing earlier than normal.

"This is an air mass that's more typical for the middle of January than mid-November," said Birk. "It is pretty much about the coldest we can be this time of year (and) it could break records all over the region."

Here at home, we'll see a little bit of warmer weather than others. Expect temps to top out in the high 20s Tuesday and Wednesday. The average high temp for this time of year is 51 degrees. 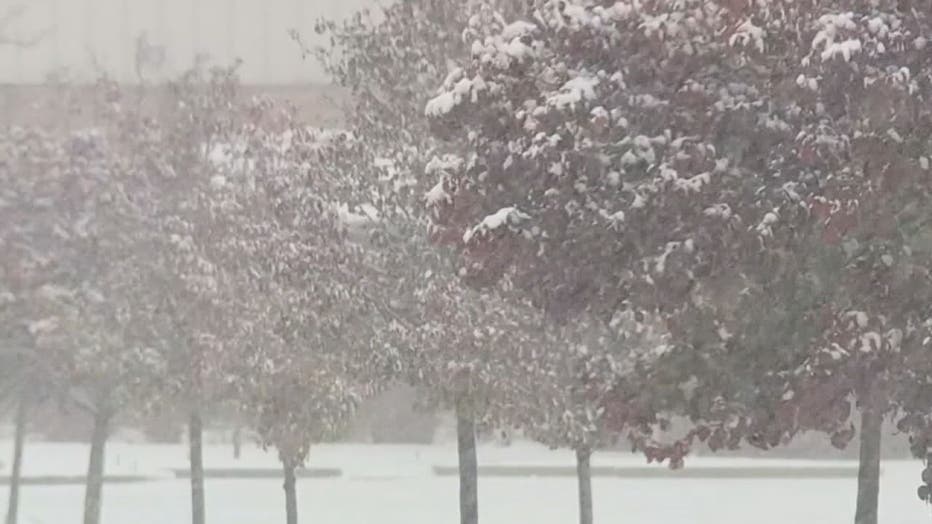 Wind chills will drop into single digits, with some below zero, overnight into Wednesday.

Then on Wednesday, another system is moving in that will likely bring us some more snow, though not much. Expect some light snow showers that will linger into Thursday, when temps get back above freezing. And next week we'll get temps back in the 40s.

And as for that snowfall on Monday, it's the biggest November snowstorm we've ever gotten. The closest one in Michigan was in 1951 when we got about 5 inches.