GROSSE POINTE PARK, MIch. (FOX 2) - There are still a lot of questions about what led to a deadly crash at the corner of Jefferson and Conner at the Grosse Pointe Park and Detroit border.

A 22-year-old man was killed when his Dodge Charger crashed into a semi, getting wedged under the trailer Tuesday. Grosse Pointe Park police said the department will address the details of the incident sometime Wednesday.

There are still a lot of questions about what led to a deadly crash at the corner of Jefferson and Conner at the Grosse Pointe Park and Detroit border.

"The truck couldn’t stop in time and the car went under the truck," said a witness.

The intersection of Jefferson and Conner was closed for hours as investigators went to work, starting around 2:15 p.m. this afternoon.

"We heard a Dodge Charger going extremely fast, it looked like it was at least 95 miles per hour and then seconds later, we heard an extremely loud boom," said Elton Kesto, Metro PCS owner. "So loud, it sounded like someone kicked the back door."

Moments after the crash, emotions overflowed after relatives of the driver of a blue Dodge Charger had died in the violent crash.

"My sister who is his mom called me," said the woman who said she was his godmother. "I left work and I'm not thinking he's gone because I was hearing everyone was in the ambulance. Then I saw the people around the car and they said the man is gone. The baby in there is dead."

Kesto says when he ran out to see what happened he could hardly believe it.

"The Dodge Charger had gone so fast that when it hit the semi-truck, it went through and underneath the trailer," he said.

The initial reports are the driver was attempting to get away from Grosse Pointe Park police officers.

"Seven or eight police officers had rolled immediately within 10 or 15 seconds of the accident so they weren’t too far behind," he said. 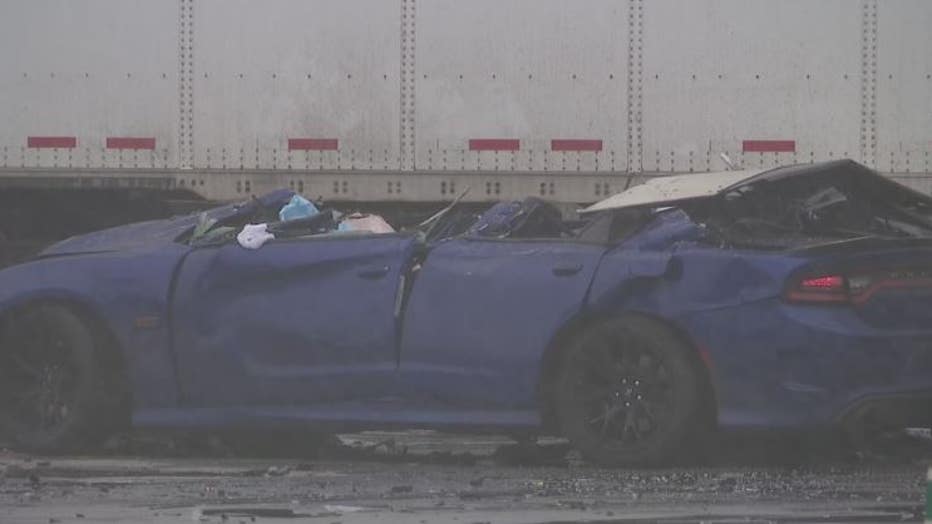 It is a reality that is hard for loved ones to grapple with.

While others think about what might have happened if the car kept going.

"It might have hit someone else," Kesto said. "Maybe that semi-truck saved someone else’s life."

There are several businesses at the corner of Jefferson and Conner which have cameras. Those store owners say they have every intention of turning footage over to police as the investigation continues.