The center of the investigation is a dark playground set back off the road in the Clinton Cooperative Apartment complex early Monday morning. The flashing lights of the Clinton Township police were seen at 6 a.m.

TUESDAY NEWS HIT - A dark playground set became the scene of an investigation early Monday morning after a child that had wandered from its home in Clinton Township was found not breathing. The flashing lights of the Clinton Township police were seen at 6 a.m.

According to police the child had wandered away from his home from the nearby Saravilla apartments.

Police say when they found a 5-year-old boy they rushed him to hospital but it was too late. FOX 2 has learned where he was found, but there are many unanswered questions that remain.

At the Saravilla Apartments in Clinton Township, a terrible sound was heard by some around 6 a.m. this morning.

"I woke up and heard screaming," said a neighbor. "I came outside and there were police everywhere. So I just walked my son to the bus and then I went to work."

The timing of the scream the neighbor heard is when police found the body of a 5-year-old boy. The discovery made at a playground just down the road from where the child lives.

"So close to home, and it’s a tragedy that no one wants to endure," said resident Gabrielle Thacker.

"I see him get on and off the bus all the time. He is a cute little boy," the neighbor said.

Those closer to the playground say the police spent hours at the scene trying to determine what happened.

"They were taking pictures, investigating the playground over here," Thacker said.

However, details of what exactly happened, remain few at this time.  Police are not saying what time the child wandered from home, or how he was able to get out.

5-year-old wandered from apartments, found at playground before dying

Police are not saying much either on how the child managed to get outside on his own - or how long he was missing before they found him at the playground.

The family of the little boy was overcome with grief to talk about what happened.

"It’s really sad. Obviously, no one wants to lose a child," the neighbor said.

Clinton Township police did not indicate anything in their initial news release that the death was suspicious however the case remains open and active at this time.

Read more about the story here.

Metro Detroit Weather: 3-6 inches of snow expected - here's when it will start falling

The snow is set for Wednesday, but today it's the chill. You'll feel some gusty winds thanks to a west breeze kicking our chill values down into the 20s for the morning. 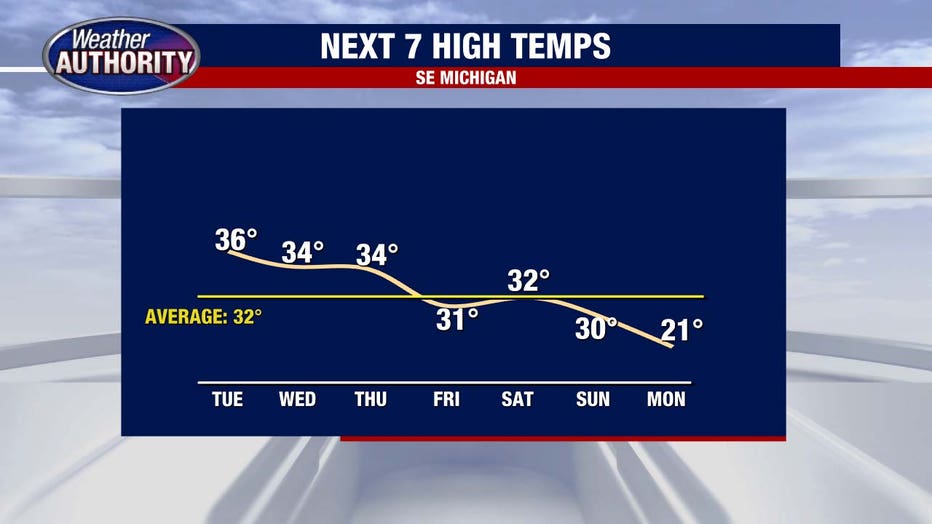 Our Wednesday snow will kick off over the course of the morning commute, starting between 5 and 9 a.m. Any accumulation over that time will remain minimal. It will be snowing more on than off the rest of the day before tapering off during the evening. General snow totals should range between 3-6 inches

As always with a prediction of the future there is some uncertainty and while 7 or 8 inches isn't likely, it remains within the realm of possibility for some of our eastern and southern areas.

A couple weaker systems try to slip in on Friday night and Sunday bringing with them the potential for more snow. In the meantime, our temperatures turn colder. And then colder.

Metro Detroit Weather: 3-6 inches of snow expected - here's when it will start falling

Our next round of snow comes Wednesday morning, building up as the day continues. Temperatures are also expected to continue falling this week.

Royal Oak residents want the city to do something about its high parking violation rate.

A study of parking enforcement in the city found that 43% of all visitors that used on-street or meter parking downtown were ticketed. That number of tickets comes with a pretty penny for the city budget - but some are worried it's giving Royal Oak a bad name.

The study, which was commissioned by a parking consultants company for the city was released earlier in January. It found that a majority of those ticketed for parking had either violated the five-minute grace period offered to anyone parking on-street or were parked for an hour longer than the allowed time.

About 43% of all drivers who used on-street parking in Royal Oak were ticketed while parked in the city. That's a pretty penny for the city, but businesses and residents are worried it's giving the city a bad name and keeping people from visiting.

Royal Oak issues 32,500 tickets a month on average. At about $20 a ticket, that comes out to about $3.5 million in parking fines annually.

A Redford gas station clerk is facing murder charges after a fatal shooting inside the business on Telegraph on Friday.

Questions still remain after a shooting left an unarmed man dead inside a Marathon gas station in Redford Friday morning. Two employees that worked at the business were taken into custody following the incident.

Police said last week that they were called to the Marathon gas station at 13550 Telegraph Rd. for a shooting around 3:30 a.m. after a man got into an argument with a clerk.

Two clerks were arrested after the shooting, and the other clerk hasn't been identified.

A clerk at a Redford gas station is facing murder charges after police say he shot a man inside the business.

Questions continue to circulate over the discovery of a 22-year-old man's body found dumped on the side of Southfield Freeway Monday morning. It's not clear if the victim was shot and killed on the highway or if his body was dumped there.

For Pastor ‘Mo’ Hardwick, it doesn't matter if he was shot or dumped because the cameras that should be monitoring the site aren't doing enough to deter crime. "You’re not going to do that in front of a bank. I know you’re not, because the cameras are right there, rolling," he said.

MDOT has 300 cameras monitoring Metro Detroit freeways, though it isn't staffed to oversee all cameras at once. Dianne Cross of MDOT said only four people monitor them for training purposes. And while they can pick a certain camera to record from, they would only know to do so if state police tipped them off to something going on.

"When MSP may say to us 'Hey we got a call about a shooting on a freeway,' we will immediately look to those cameras to see if there is anything that can be seen," she said. "So while it is a great system it is obviously not perfect for every situation and if money were not an issue, obviously we might do things differently."

Before the snow will come the cooling temperatures. We're back in the swing of some frigid winter temperatures that are expected to stick around for much of this week and next.

At least seven people were killed in a pair of shootings in Half Moon Bay on Monday, authorities said.

The suspected shooter turned himself in at a sheriff's department substation where he was taken into custody around 4:40 p.m., the San Mateo County sheriff's office said.

He was identified as 67-year-old Chunli Zhao of Half Moon Bay. A semi-automatic handgun was used in the shootings and was located in Zhao's car, authorities said.