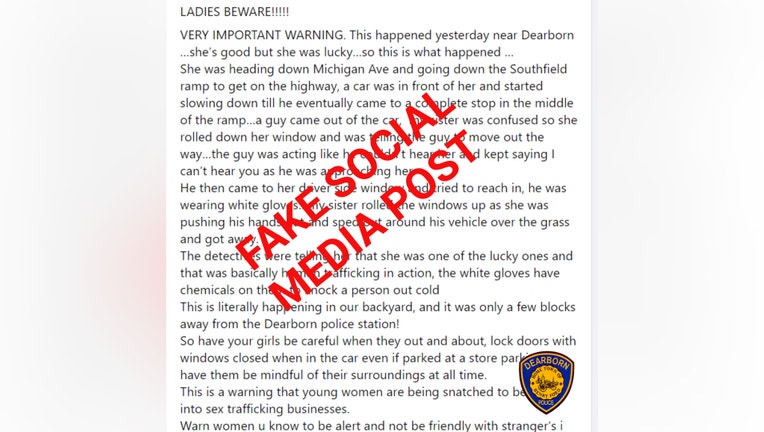 DEARBORN, Mich (FOX 2) - A Facebook post claiming a human trafficking attempt happened as a woman was getting onto the Southfield Freeway is false, according to Dearborn police.

The post claims that a woman was getting onto the freeway from Michigan Avenue when a car stopped in front of her on the ramp, forcing her to stop. The post alleges that a man wearing white gloves approached her, said he couldn't hear her, and tried to reach into her car.

The post goes on to allege that detectives were spoken to, and the detectives said the gloves had a substance on them that would knock the driver out.

However, none of this is true, police said. There is no evidence that this or similar incidents have happened.

The post is just the latest human trafficking rumor to be debunked by police.

Last month, the Genesee County Sheriff's Office said that a post claiming a serial killer was kidnapping people was not true. According to the sheriff, the same post with the same photos and claims was also making its rounds in other states, and was posted by someone whose profile says they live in Zimbabwe.

In July, Romulus police said an attempted human trafficking claim at a 7-Eleven near Detroit Metro Airport was investigated and was fake.