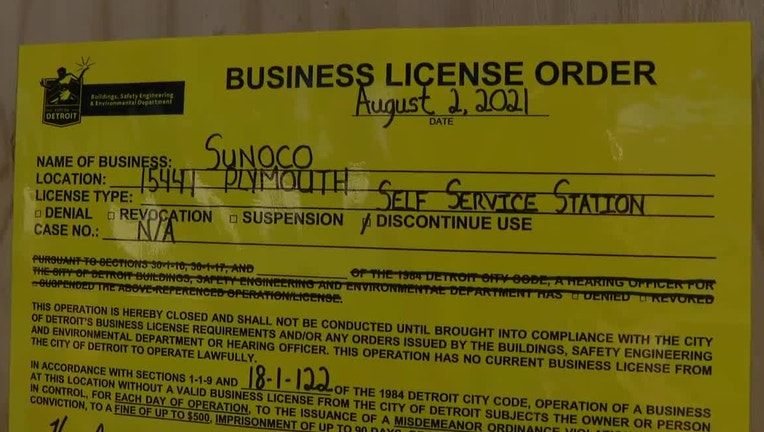 An order shutting down a Detroit gas station after a clerk shot a customer.

DETROIT (FOX 2) - When a crime happens at a Detroit business, police are digging into the establishment to make sure it is being run responsibly. If it isn't, it will be shut down.

"Businesses have a responsibility to the community to provide a layer of safety," Police Chief James White said. "When we are incited in we are going to look around to see if you’re licensed."

Detroit police have announced the shutdown of several businesses where shootings occurred recently, including a banquet hall, a gas station, and a bar.

Police said an east side banquet hall where a man was shot and killed July 13 had not been licensed since 2013. The business was shut down after the shooting that also injured five.

A gas station on the west side was shut down for operating without a license after a clerk shot a customer July 31. An argument led to the worker pulling out a long gun at the Sunoco gas station in the 15400 block of Plymouth Road.

Most recently, police closed down a Southwest Detroit bar after one person was killed and three others were hurt.

White said the Red's Park-Inn Bar was open when it was not supposed to be, at 4:30 a.m., Aug. 16 when at least two suspects opened fire on the business' patio from an alley. The shooting injured an 18-year-old who shouldn't have even been at the bar, White said.

White said Detroit police would move to have the bar's liquor license revoked. He said the business has received numerous tickets in the past, and police have been called to the establishment 42 times since 2016.