DETROIT - Toson Knight has spent much of his life helping others. It's why he started his nonprofit to work with juvenile offenders.

A Detroit school dean and former deputy manager in the department of neighborhoods is running for the open District 4 seat on the city council.

But last year, it was Knight who found himself in need of some help.

"April 6th of last year my aunt passed, April 20th my mom passed from covid," he said, "so I understand the seriousness of it, I understand how it can devastate the family because it did it for us."

How he can protect the rest of his family and the rest of the city will be one of many issues he will face if elected to Detroit's 4th district seat on the city council, which he has announced he plans to run for.

Knight is the current dean of culture at Western International High School in Detroit. He's also served as District 4 deputy manager in the department of neighborhoods.

The 34-year-old spent much of his childhood in Detroit and Highland Park, before moving to East English Village about seven years ago.

His experiences as a kid pushed him to start Caught Up, a non-profit that helps at-risk youth. The group serves 100 children a year.

Currently serving within the Detroit Public School system, the district is taking a multi-week pause due to surging coronavirus numbers.

Knight says people should be following the numbers, and if that means returning to remote learning, then so be it. That will likely cause consternation with standardized testing around the corner. 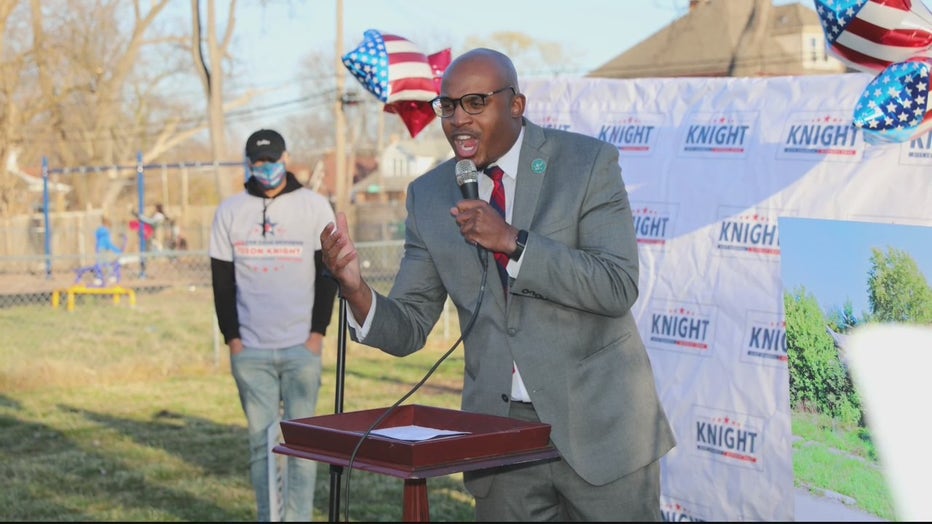 But the numbers also say that to recover from the pandemic means getting vaccinated - which Detroit has struggled to do in the months since their rollout.

"I believe the issue is educating Detroiters that the vaccine is safe because a lot of people don't feel that way," Knight said., "Someone working down at TCF - they texted me 'hey, we have open appointments from 9-1' so I tried to put that out there to my entire network and just let them know you can get your entire vaccination today right now."

To boost immunity, that will require more neighborhood engagement like what the city has unveiled this week in each of Detroit's seven districts.