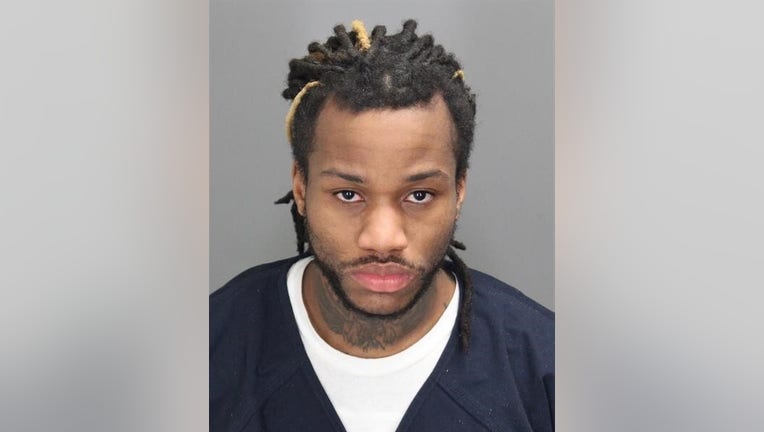 Marcel Hinkle, 27, was arrested last week for nine armed robberies in Oakland and Genesee counties, some of which happened on the same day.

OAKLAND COUNTY, Mich. (FOX 2) - A Flint man, who was out on parole after several felony charges and convictions, is back in jail after law enforcement says he robbed 9 pharmacies in Oakland and Genesee counties.

Marcel Hinkle, 27, was arrested last week in connection to several robberies of pharmacies over the span of 12 days.

According to the Oakland County Sheriff's Office, they first started the investigation on January 19 when a Walgreens on South Baldwin Road in Orion Township was robbed around 7:30 p.m. Deputies said a Black man in a black hoodie with a white logo on the front, black pants, and black shoes while wearing a blue paper facemask demanded money from the worker and showed what appeared to be a gun while threatening to shoot the employee. The man took the money and ran.

The next day, a little after 2  p.m., another Walgreens was robbed, this time in Lake Orion where a man wearing the same clothes robbed. This time it was the store on North Park Street and deputies said it was the same man from the previous day.

On Friday, Jan. 22 around 1:50 p.m. Madison Heights Police were called to a CVS on John R. for an armed robbery. This time a man wearing a green jacket, blue mask, black pants, and white gloves walked in and demanded money.

Police said he told the clerk and manager multiple times "don't make me shoot you." Employees said he pointed to his pocket and implied he had a gun.

He left with a drawer of money and an employee saw him getting into a Chevrolet sedan, believed to be a Malibu.

Just 40 minutes later on that same day, the Oakland County Sheriff was called to a Walgreens on Crooks in Rochester Hills when a man wearing a green camouflage patterned jacket, blue mask, black pants, and one white glove entered the store.

Employees said he told them "this is a robbery and as long as you follow protocol everything would be all right" before leaving with money from the register.

Detectives said surveillance video showed him getting into a dirty Malibu.

The next day, Jan. 23, a little before 6 p.m., deputies were again called to a Walgreens, this time on Dixie Highway in Independence Township for an attempted robbery. A man in the same clothes described in the first two robberies walked up to the clerk and demanded she give him all the money. She said he threatened to shoot her if she didn't comply.

Exactly one hour later, in Holly, police were called to the CVS on Grange Hall Road where a man wearing the same clothes robbed the pharmacy. The man left the store in a black Malibu.

The sheriff said there was a little more than a week between armed robberies of pharmacies but it ended on Jan. 31 around 3:30 in Troy. That's when police were called to the CVS on Big Beaver where a man with a dark jacket or hoodie with a white emblem on the front, dark pants with rips on the front, gray boxers, a disposable mask, and dark or black shoes robbed that store.

Authorities didn't say how they tracked Hinkle down, specifically, but said he was arrested on February 4th for all of these robberies. Additionally, he was out on parole after being released from the Michigan Department of Corrections on Nov. 4, 2020. He previously was convicted of armed robbery and concealed weapon charges.

"I am extremely proud of the team effort of all the agencies involved to bring this clearly dangerous serial armed robber to justice," said Sheriff Michael J. Bouchard. "Hopefully, this time, he will stay behind bars and not threaten the public again."

The Oakland County Sheriff worked with police in each of the cities to investigate each robbery.

While the sheriff said Hinkle is connected to these robberies, He was charged with armed robbery and felony gun charge for the Orion Township robbery, armed robbery for the robberies in Lake Orion, Rochester Hills, and Auburn Hills.