Crumbley with only one word answers in court - seeming to lack emotion or remorse, but his attorney disagrees. She says he is remorseful and more will come out at the next hearing.

PONTIAC, Mich. (FOX2) - First came the not guilty plea, then the insanity defense and now a drastic change for Oxford mass shooter Ethan Crumbley pleading guilty. Crumbley appeared in court Monday pleading guilty to 24 counts against him for the Nov. 30 school attack.

His attorney said today that with the guilty plea it was her client wanting to take accountability for his actions in the mass shooting at Oxford High School.

Keast: "It is true that you knew or had reason to know that your choices on November 30th, 2021 in committing these crimes would cause a substantial likelihood of death or serious injury?

Crumbley with only one-word answers in court - seeming to lack emotion or remorse, but his attorney disagrees. She says he is remorseful and more will come out at the next hearing.

"He definitely is. We have to remember he is a 16-year-old boy," said attorney Paulette Loftin. "So, a very scary situation today."

Oakland County Prosecutor Karen McDonald - says…there was no plea deal given for any kind of shorter sentence, he’s facing life without parole - giving up the right to a trial.

"Today is about some small closure (for the victims) that this won't be a trial," she said. "

Crumbley’s attorney in so many words said, the evidence against her client was too damning.

"Originally we filed a notice of insanity, but based on the conversations we have had and the review of the discovery, we felt it appropriate to withdraw that and have him plead guilty today."

Oxford High School Parent Meghan Gregory - in court Monday, says her son…is forever changed, Keegan Gregory, escaping the shooter after being held hostage in the bathroom for 6 minutes with Justin Schilling who was shot and killed.

"He murdered four children and changed 1,800 kids' lives," she said. "I tried to look at him that a kid that needs help, but the closer I have gotten to this, I struggle to forgive anyone who killed someone else and tortured kids."

Gregory said she learned with the rest of us from the shooter - that his dad James, bought him the murder weapon.

Keast: "Is it true you asked him to buy that firearm?"

Keast: "Is it true you gave him money to buy that firearm?"

Evidence likely to be used against James and Jennifer in their upcoming criminal trials. But for now, Gregory’s son Keegan - feels some relief knowing he won’t endure this trial, against the shooter.

Ethan Crumbley pleads guilty to all charges including murder and terrorism

The 16-year-old alleged gunman involving in the Oxford mass shooting has pled guilty to 24 counts, including murder and terrorism. Ethan Crumbley withdrew his plea of insanity willingly, his attorney said.

"So for him that was a big awakening almost giving him a permission to start the real healing process," she said. 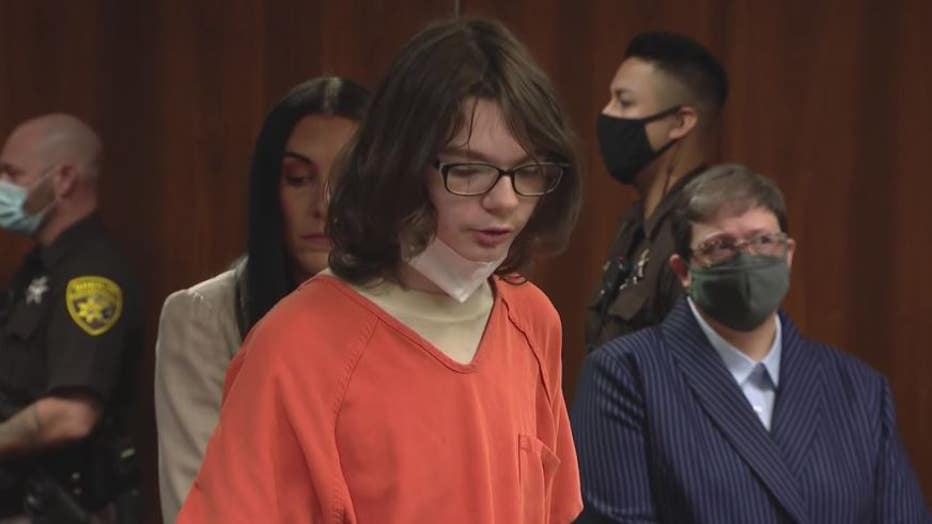