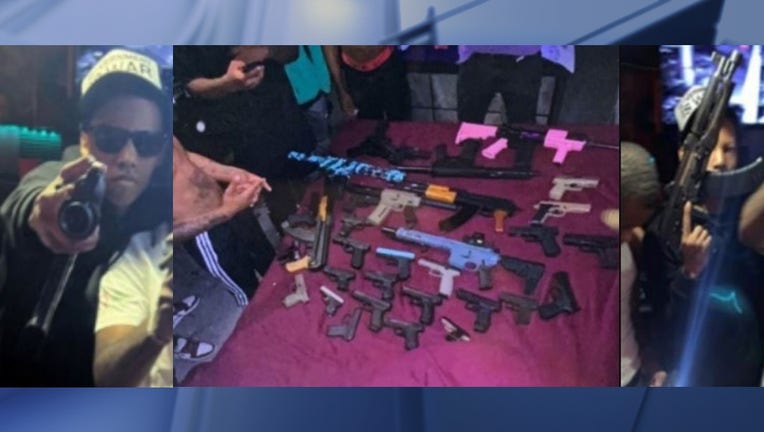 WESTLAND, Mich. (FOX 2) - Another person is facing charges after authorities say photos on Instagram showed him with stolen guns.

According to a court filing, photos showing Tivon Jaquess Jr. holding an AK-style weapon were posted on Instagram on Sept. 16.

On Tuesday, agents from the Bureau of Alcohol, Tobacco, Firearms, and Explosives searched Jaquess' home on Forrer Street in Detroit. Two men and two juveniles were in the basement, but Jaquess was not home.

During the search, agents found one gun on a dresser and six guns split between two backpacks. Some guns had altered serial numbers, and four of them were reported stolen during a break-in at Armed in Michigan, according to the court filing.

A Westland gun store was ransacked by a group who crashed through the building with a stolen Kia SUV.

According to the court filing, another photo posted on social media showed numerous guns on a sheet in a room that appeared to be in the basement where Jaquess lives. Some of those weapons matched the description of firearms stolen in Westland, the filing said.

Agents are seeking a charge of knowingly possessing stolen firearms against Jaquess.

The photos in the Instagram post also led to the arrest of another man, Keijuan Watkins, who was in the basement of Jaquess' home when ATF agents searched the home, the court filing said.

Local police and federal authorities have been working to track down suspects and stolen weapons after two break-ins at C&C Coins in Dearborn Heights and the Westland gun store. During the break-in where the guns Watkins had were stolen, thieves drove a stolen Kia SUV through the building and ransacked the store.

A social media post advertising some of the things stolen by a suspect lead Westland police to its latest arrest.