Kira Pennock, the owner of a farm in northern Oakland County boarded and took care of the Crumbley's two horses. Her testimony included how she knew the couple and her communications with Jennifer before and after the shooting took place at Oxford High School

ROCHESTER, Mich. (FOX 2) - The preliminary examination in the case against James and Jennifer Crumbley started Tuesday morning in an Oakland County courtroom. The parents of the alleged Oxford High School shooter, Ethan Crumbley, were each charged with four counts of involuntary manslaughter days after their son was arrested for allegedly shooting several people at Oxford High School on Nov. 30. Four students died in the shooting and 7 others were seriously hurt.

A preliminary exam is when a judge will hear evidence presented by the prosecution. This includes documents, physical evidence, and witness testimony.

In this case, there is a mountain of evidence and witnesses involved and it is expected to take more than one day to work through it all. The prosecution opened Tuesday's preliminary exam with a horse farm owner from Metamora, Michigan.

Kira Pennock was the first to testify in the case and her account was mostly focused around the horse farm and how the Crumbleys came to have their animals boarded at her facility.

On Tuesday in court Oakland County Prosecutor Karen McDonald presented a school phone call to the parents of Ethan Crumbley one day before the shooting as well as disturbing phone text messages.

Pennock said she first met Jennifer through a mutual friend who housed the Crumbleys' first horse. She testified that Jennifer purchased another one and told her she was drinking when she bought the horse for $5,000 in 2021.

She then testified the horse farm boarded and fed the animals, at a cost of $400 per month per horse. Additionally, Pennock said she was giving lessons to both Jennifer and James but it soon focused on Jennifer with an hourly lesson at $35 each week. She also testified that the Crumbleys would groom and tack them and ride them and would see them regularly every week. Pennock testified that she eventually saw much more of Jennifer than James and that he didn't want much to do with the horses.

Most of the questions about the relationship between Pennock and the Crumbleys were focused on horses but later turned to marital problems between the Crumbleys and then, Ethan.

Pennock stated that there were marital problems and that Jennifer confided in her that she believed James was trying to meet up with singles. However, she said Ethan Crumbley then came forward and said he was the one who had looked up singles online.

Pennock said that she didn't recall Jennifer talking positively, if at all, about Ethan and called her son 'weird'. She said Jennifer said he only had one friend and spent a lot of time online and playing games. She also said Jennifer did not consider him 'normal'.

"When she would talk about him, it was ‘oh, he doesn’t do normal kid things'," Pennock said.

On Nov. 30th, James was at the facility to put ointment on one of the horse's legs. Pennock said that was around noon on that day and she did not see Jennifer, who was supposed to be at the facility around 4:30 that day for a training session.

Around 11 a.m., Jennifer confirmed she met with Ethan's counselor in a Facebook Messenger exchange. Pennock said she didn't know what the meeting was about and asked if she wanted to proceed with a training session that day.

Jennifer said everything was okay but Ethan was having a hard time. She then shared a picture of what Ethan had drawn at school and confirmed she was planning to be there later in the day.

In the messages, Jennifer then said Ethan could benefit from horse therapy and encouraged her to bring him out.

Around 2:30 p.m., Jennifer said she would not make it that day for their planned training session. This was an hour after the shooting at Oxford High School and Jennifer asked her to work one of their horses that day. Pennock asked about the shooting and asked if Ethan was okay. Jennifer did not respond to that message but sent one at 4:42 p.m. on Nov. 30, Jennifer messaged she ‘needed to sell her horses stat’.

Pennock told the defense attorneys she planned to take care of the horses. After it became clear that Ethan was the alleged shooter, Pennock confirmed she texted Jennifer that she didn't think what had happened was her fault. "It sounds like Ethan was a troubled kid," read one of the texts.

"I wish we had warnings. They made a terrible decision. He's a good kid," Jennifer replied in text messages.

Pennock said she tried to speak with Jennifer on the phone and was concerned that if the Crumbleys showed up at the farm, she feared danger would follow them and asked them not to drive to Metamora.

With both sides finished questioning Pennock, she was dismissed and the next witness was called. 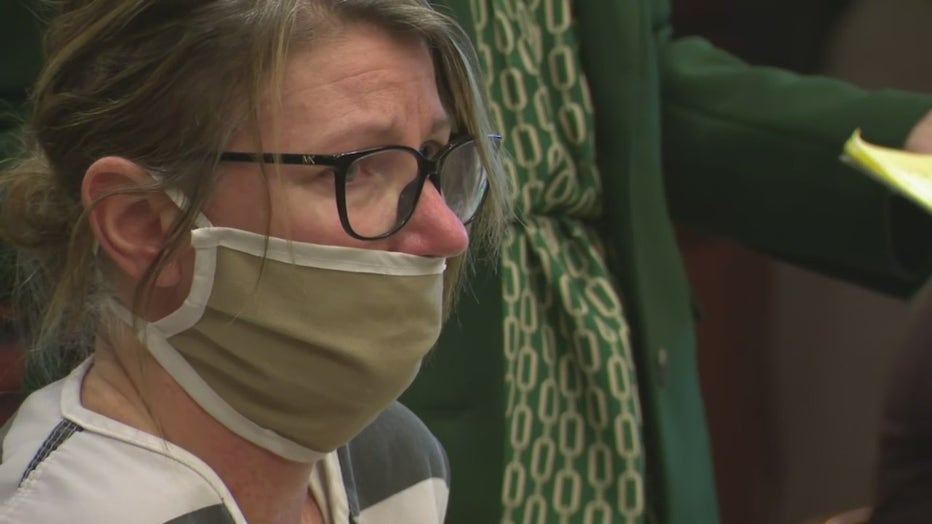 Jennifer Crumbley was in court for a preliminary examination on Feb. 8, 2022, on charges linked to the Oxford High School shooting.