MONDAY NEWS HIT - For the next three weeks, life under Michigan will be altered in a fashion not enacted in several months. As October and November's COVID-19 caseload continued climbing at an unprecedented rate, state health officials finally pulled the plug on partial lockdown measures. Few sectors of Michigan's economy and lifestyle were spared from restrictions.

Limits on gathering, closures of indoor dining, remote-only learning in high school, and an end to organized sports were among several of the changes that Michigan Gov. Gretchen Whitmer announced Sunday night.

For the next three weeks, Michigan will be under rules it hasn't lived by for months after a climbing case load forced health officials' hands. The timing might impact Thanksgiving plans for any planning to travel.

There are key differences between the lockdown first enacted in March and the three-week lockdown this month, which begins Nov. 18. Health experts and hospital CEOs cited small and medium-sized gatherings as one of the primary reasons COVID-19 is rising. So gatherings indoors will be limited to 10 people, while gatherings outdoors will shrink to 25.

With flu season hitting in stride during colder months, indoor settings at restaurants and bars are key exposure sies for COVID-19. All indoor service at these places will be suspended, while outdoor service and takeout will still be allowed. 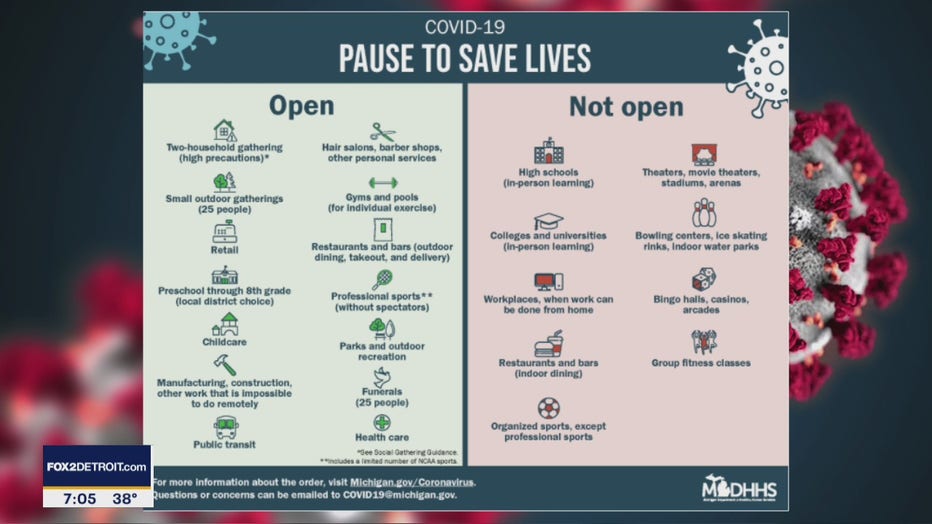 Republicans were quick to rebuke Whitmer's order, saying it would bring more economic harm to the state. Democrats offered their support while chiding the GOP for inaction at the state level.

Emagine Entertainment, which operates movie theaters in Michigan called the move hypocritical and inconsistent in which businesses will be impacted - movie theaters are among the businesses that will be forced to shut down.

The president and CEO of Michigan's restaurant and lodging association also disagreed with the health department's new order.

You can learn more about what businesses are impacted by reading more here.

U of M’s epidemiologist responds to new COVID-19 restrictions

U of M’s epidemiologist responds to new COVID-19 restrictions

Wind knocks out power for thousands

A blustery end to the weekend knocked out power for tens of thousands of Michiganders after conditions tore through the lower half of the state on Sunday.

An outage map from DTE was peppered with hundreds of locations where customers were without power. As of Monday morning, more than 144,000 people DTE customers didn't have power.

While downtown Detroit was mostly insulated from the damage, neighborhoods in Grosse Pointe, River Rouge, Dearborn Heights, Southfield, Royal Oak and elsewhere all had outages. 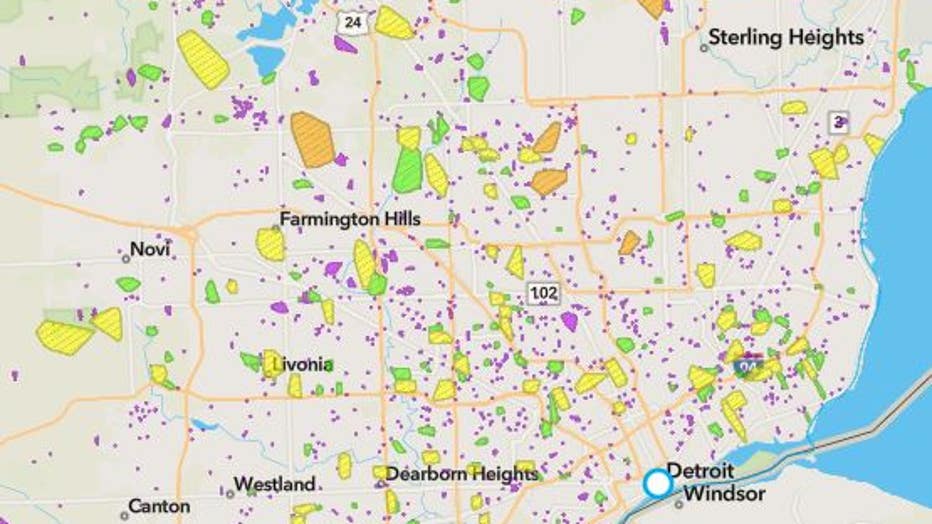 “Today’s weather will be breezy, but much better than Sunday which will assist in restoration,” said Guy Packard, Consumers Energy vice president of electric operations. “We remind deer hunters taking to the woods and fields today to be on the lookout for storm damage, including downed wires, and be aware that our crews may be working nearby. Safety needs to be everyone’s top concern.”

Wind is still expected for Monday, but not to the severity as weekend conditions were.

A biotech firm's COVID-19 vaccine showed positive signs after early results revealed it was almost 95% effective at treating the virus.

The announcement came from Moderna, who is among several major companies racing to develop a vaccine for the coronavirus. The preliminary data is the second batch of encouraging news after Pfizer released their own results last week of a vaccine candidate that is 90% effective.

"That should give us all hope that actually a vaccine is going to be able to stop this pandemic and hopefully get us back to our lives," Hoge told The Associated Press.

A vaccine can't come fast enough, as virus cases topped 11 million in the U.S. over the weekend -- 1 million of them recorded in just the past week. The pandemic has killed more than 1.3 million people worldwide, more than 245,000 of them in the U.S.

Detroit police are asking for the public's assistance in looking for a 29-year-old woman who has been missing since Friday, Nov. 13.

Charmaignette Vanzant was last spotted around 1 a.m. at her home, located in the 16000 block of Log Cabin Street.

Police are told she left the location on her own and hasn't been heard from since. She's described as a Black woman, 5-feet tall and weighing about 120 pounds.

Family says she is in good physical and mental condition.

Michigan State Police are investigating a shooting that occurred Monday morning on M-39 in one of the northbound lanes.

Around 3:20 a.m. troopers were dispatched to the city of Southfield, near the 8 Mile Road exit from M-39.

Two of the region's most recent freeway shootings happened in Allen Park and Southfield where vehicles appeared to be targeted randomly while driving on the highway.

After a victim had been shot, they fled the scene before entering northbound M-39, eventually coming to rest where they were blocking the left lane north of 8 Mile Road.

Another vehicle that was uninvolved with the shooting rear-ended the victim's vehicle.

The shooting victim then fled the crash scene on foot before getting picked up by Southfield Police. The Detroit police are following up on the investigation and both vehicles damaged from the crash were towed.

1. Trump says for first time that Biden 'won,' adds that he is not conceding
2. Prater saves the day for Lions with 59-yard field goal as time expires
3. Woman shot while allegedly sitting in her living room, police work to gather more info
4. INTERVIEW: U of M’s epidemiologist responds to new COVID-19 restrictions

It's going to be a chilly Monday and an even colder Tuesday before temperatures rebound later in the week. Expect more clouds and wind gusts upwards of 35 mph until around mid-day.

We are still a little breezy today with wind gusts upwards of 25 to 35 mph. Thankfully those winds should die down later in the day under partly to mostly cloudy skies with highs in the mid 40s. There is a slight chance for a rain/snow mix late this evening.

Trump says for first time that Biden 'won,' adds that he is not conceding

President Trump for the first time on Sunday signaled that Joe Biden "won" the 2020 presidential election that he continues to say was "rigged" against him, adding that he is not conceding the race.

"He won because the Election was Rigged," Trump tweeted in response to a monologue on Fox News' "Watters' World."

The tweet comes eight days after the Fox News Decision Desk named Biden as the projected winner. Trump has not yet conceded, and his campaign has deployed lawyers to key battleground states to contest the ballot-counting processes there.

Some on Twitter wondered if they had just read a concession statement from Trump.