Graves in Oakland County serve as reminders of those lost to gun violence, suicide

Gravemarkers at St. David's Episcopal Church represent the Oakland County residents who have been lost to guns so far this year. The church plans to continue marking these losses through the year as a reminder.

SOUTHFIELD, Mich. (FOX 2) - Outside St. David's Episcopal Church in Southfield, grave markers represent everyone who has died by gunfire in Oakland County this year.

Gray is for a homicide, black symbolizes a suicide, and white is for those under 18.

"We're keeping count, and we're planting these crosses through Jan. 1, 2023, as a visual reminder of this disturbing occurrence," said Fr. Chris Yaw, the rector at the church. 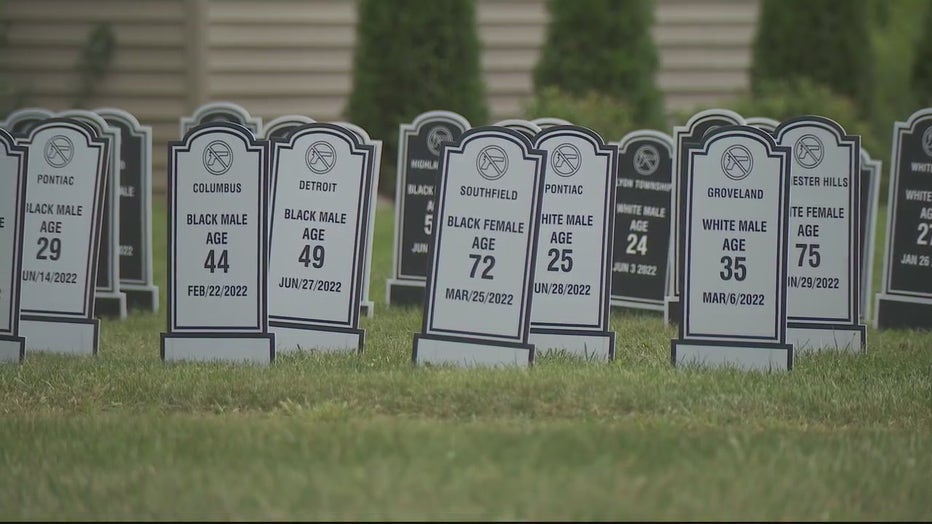 Yaw launched the gun safety exhibit "Let There Be Light" on Sunday. He says death by firearms is the leading cause of death for children in Michigan and in the country.

A Stanford University study found that men who own handguns are eight times as likely to die from gun suicides, while women gun owners are 35 times more likely.

"Gun violence in Oakland County and in Southfield is rare. But when it happens, it is important for us to have a plan in place. Community partnerships bring community awareness and accountability," said Southfield Police Chief Elvin Barren. "We're going to launch a gun buyback program in Oakland County."

The program will be voluntary and offers residents a convenient way to dispose of unwanted firearms. Proponents also say buyback programs help reduce gun violence by removing weapons that could be accessible to children.