A Walled Lake man has been identified as the gunman in a shooting that killed his wife and critically injured his daughter. Police eventually shot and killed the man.

MONDAY NEWS HIT - There's a lot still to unravel following the deadly shooting of a woman in Walled Lake after a husband killed her, the family dog, and critically injured his daughter. He was later killed by police.

The woman who dialed 911 was the daughter who told police that she had been shot by her father. She failed to give the precise location of their home during the call.

Police were able to trace it to a home on Glenwood and responded to the area. While officers were talking to a neighbor, they heard more gunshots coming from a home in the area. When police arrived, they heard a gunshot before returning fire and killing the 53-year-old gunman.

Identified as Igor Lanis, he has no criminal history and no history of mental illness, adding further mystery to what happened in the household. There was another family member who was not home at the time of the shooting.

"Terribly sad on so many levels. Hopefully his daughter will survive, but the injuries are pretty traumatic," said Oakland County Sheriff Michael Bouchard.

Officials said the shooting happened at their family home around 4:00 a.m. at the 1200 block of Glenwood Court.

"Suspect exits the home and opens fire, the Walled Lake officer is over here - the home directly behind him gets struck multiple times by the suspect fire, in fact, it blew out the front window on the door," said Oakland County Sheriff Michael Bouchard.

Officers entered the home and found Landis' 25-year-old daughter trying to crawl out of the house after being shot multiple times. She was transported to a nearby hospital and is currently in stable condition.

Her 56-year-old mom and the family dog were found shot to death inside the home.

"He often walked his dog. He had a fluffy white dog that we would often see; the dog was beautiful just how we knew him, the guy with the fluffy white dog," said Victoria Whitnauer, a neighbor.

No officers were injured during the incident.

After less than a week of striking against the school, Eastern Michigan University and protesting faculty have reached a tentative agreement on contract negotiations between the two parties. Both sides reached a consensus after a "marathon bargaining session" over the weekend, which kicked off after three days of protesting professors that walked off the job last Tuesday.

As a result of the agreement, faculty will be back in the classroom Monday, prepared for a full schedule of classes. "We’re pleased to report a tentative agreement with the faculty union on a new contract, following marathon bargaining sessions between the administration and faculty union bargaining teams this weekend that went late into the evening on Saturday and tonight," a post from the university said last night.

Faculty walked off the job Sept. 7 after the representative body for the professors said they had not been offered enough health care benefits. The EMU-American Association of University Professors authorized the strike during a vote on Sept. 6.

Professors will return to their teaching posts Monday in Ypsilanti after a marathon bargaining session over the weekend proved fruitful for both parties.

Students missed about three days of class over the issue. The school tried to sue the faculty and force them to return to class, but a Washtenaw County judge denied their motion. Students at Eastern Michigan should monitor their emich.edu email for further updates.

Michigan's long honeymoon of falling gas prices appears to be over after the cost ticked up an average of 2 cents a gallon from a week ago. A chaotic summer for energy costs saw both a record-high of gas prices and several months in a row of them falling. Currently, drivers are paying $3.85 a gallon for regular unleaded fuel in Michigan, about 11 cents less than last month.

It's still more expensive than last year when gas was 67 cents less. It'll cost drivers about $57 to fill a 15-gallon tank this week, which is about $6 more than 2021's highest price.

"While a few metro areas in the state saw gas price decreases many others saw increases, leading to a week over week increase in the Michigan state average for the first time in over 2 months," said Adrienne Woodland, spokesperson, AAA Group. "If gasoline demand begins to subside, as it typically does post-Labor Day, pump prices may likely decrease."

4 people shot while standing outside on Sunday; police look for Chrysler 300

Three men and one woman were shot on Detroit's southeast side around 3:15 a.m. Sunday.

Police said the victims were gathered outside the 13000 block of E Warren. They were standing outside when a black Chrysler 300 pulled up and started shooting.

One of the men was critically injured in the shooting. The other three shooting victims are stable.

Anyone with information is asked to contact the Detroit Police Department.

Detroit Auto Show is back

After a longer-than-expected hiatus, the Detroit Auto Show is back in town this week. The first day for the public is Saturday, Sept. 17. However, there will be several other events ongoing ahead of the show like the Charity Ball and Industry Tech Days this week.

The 2022 Detroit Auto Show will take over Downtown in a way we've never seen before with rides, drives, details, and even a dinosaur off-road vehicle encounter. There will be plenty to experience from flying cars to dinosaur exhibits this week.

New this year besides the timing is the outdoor element of the show. Go here for more information on locations for the auto show. You can snag some tickets info here. Curious about parking options? You can also check out some info here.

And there's plenty more of resources on FOX2Detroit.com for the auto show. Go here for more.

A bit on the cooler side to start things off this week with temperatures in the low 70s and mostly cloud cover. Plan on some stops and starts on rising temperatures before we hit the 80s by the weekend. 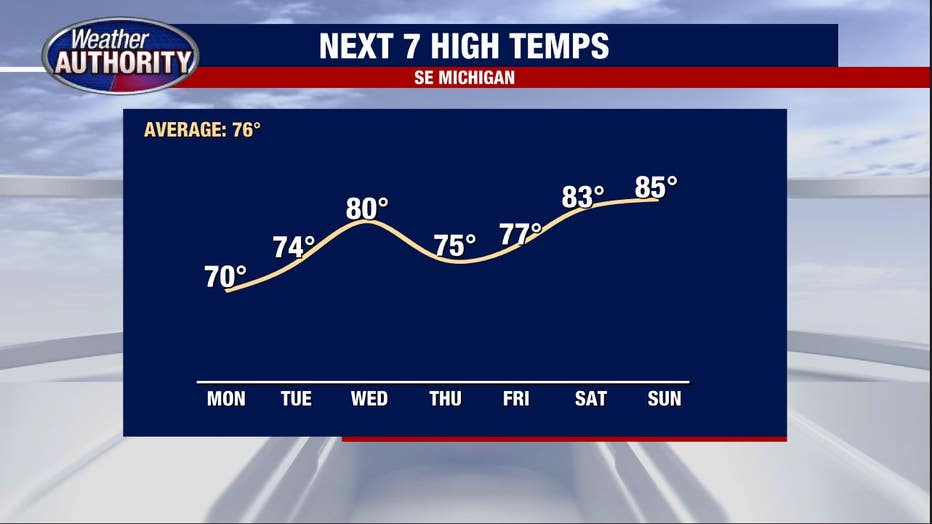 Dolly Parton, Kelly Clarkson team up for reimagined version of ‘9 to 5’

Two powerful women in the entertainment business have partnered for a reimagining of one of the most iconic songs for the working woman. Dolly Parton teamed up with Kelly Clarkson to record a duet of her classic hit "9 to 5."

The reimagined version is a slower, "moodier interpretation" that reflects the continuing struggles faced by women in the workplace, according to a press release. It was created especially for the new documentary "Still Working 9 to 5," which will be released in select theaters on Sept. 16.

"Still Working 9 to 5" examines the inequality in the workplace over the last 40 years since the hit film, starring Parton, was released. Parton and her co-stars, Jane Fonda and Lily Tomlin, are all featured in the documentary.