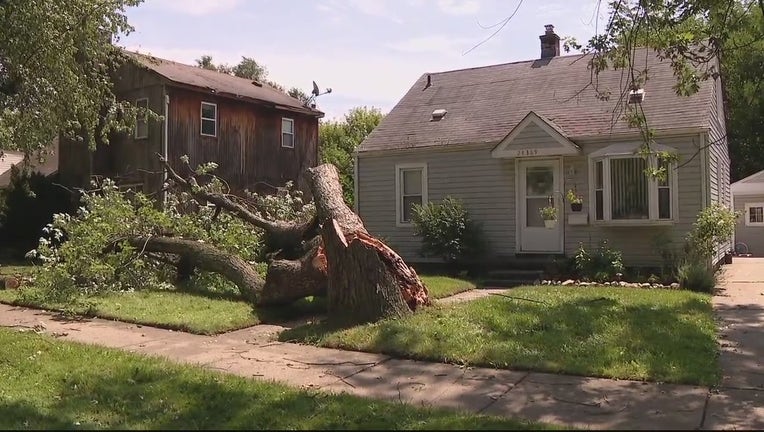 DETROIT (FOX 2) - Severe thunderstorms ripped through Metro Detroit on Wednesday and overnight into Thursday, damaging trees and homes, knocking out power, and leaving behind a mess.

Toppled trees, downed wires, and large swaths of power outages were left behind Thursday from the rounds of storms yesterday and overnight.

"It really scared the heck out of me," Chuck DeSlippe said. "I actually saw it happen - just as the storm was starting, it was a great big  gust of wind and I saw three huge branches crazy in half and go flying and the power went out for my neighbors, too."

The story in Macomb was less about flooding and more about the power of high winds with trees and utility poles knocked over.

"Once we heard the high winds, people sometimes wonder why were the sirens going off," said Macomb County Executive Mark Hackel. "Once the sirens go off it's a situation where winds were 70 miles an hour and or seen a tornado."

No tornadoes were reported Wednesday night, but plenty of storm damage and power outages from Warren to Eastpointe to Clinton Township, where a transformer was down at 16 Mile and Little Mack.

"About ten to four I heard a bang on the roof," she said. "I said, 'Uh-oh we are in trouble. And then another bang, we've got three lines off of our house right now.

"So we have a generator our grandson hooked us all up now we've just got to be safe."

Flooding reports were not the problem in Macomb County, but high winds with downed lines and trees, were.

Typically, Waterford Regional Fire would go on 30 or 40 runs a day. But when two waves of storms pushed in, they went on 120 calls!

"Lots of arching and sparking, brush burning, things of that nature," said battalion chief Joshua Dorman. "One of our lower volume stations we think that they ran more calls in the few hours last night than they did in the last two weeks."

Wednesday, the city was awash in the buzz of generators as thousands were left without power.

But running them can be dangerous - if you're not paying attention.

"Any time you’re running a generator, it should always be outside. The exhaust should be vented in a way that it doesn’t come back. In fact we did have one of those calls last night," he said.
In northern Oakland County, M-15 in Ortonville is littered with 8 power poles knocked over which led to an explosion from the lines.

Residents and homeowners will all have to be patient as DTE crews to get the power back on. It could be Thursday night or it could be as long as early next week.

Waterford cleaning up after severe weather for third time this summer

Another round of severe weather in Waterford as fire crews rushed to three times the number of calls it typically goes to.

Ecorse Creek overflowed, pushing water and even a fish up toward homes.

"It’s just frustrating because you’re trapped in your house," resident Amina Jones said. "You wake up and see water all over the ground. It's like a river. You can’t swim in it. You don’t know what’s in it."

Congresswoman Debbie Dingell said officials are working on the issue.

"You know those once in every 100-year storms that we're on the fifth or sixth in the last 30 days, have been hitting the tri-county area very hard," she said.