Protestors were around Michigan after the Supreme Court's ruling that gives states the power to criminalize abortion. The procedure is legal in Michigan, but could become illegal in the future.

DETROIT (FOX 2) - Some people celebrated Friday while others gathered to protest the Supreme Court's decision to overturn Roe. v. Wade.

The ruling means that states can make abortion illegal. While the procedure is still legal in Michigan, that could change in the future.

At the State Capitol building, protestors expressed anger and fear over the decision.

"This is a really scary day, I mean I feel empowered by this rally, but it’s a very scary day," Connie Detjen said.

Detjen was among hundreds at the protest.

"For anyone to say they have a right to tell another person what to do with their body, a woman is going to be forced to have a baby under whatever circumstances. It just makes me furious," said Jerry Ward, another protestor.

A smaller group was in front of the Michigan Supreme Court celebrating the overturning of Roe v. Wade.

"I’ve been praying for this since I was 14 years old, and I never thought I would see it in my lifetime," Vanessa said. 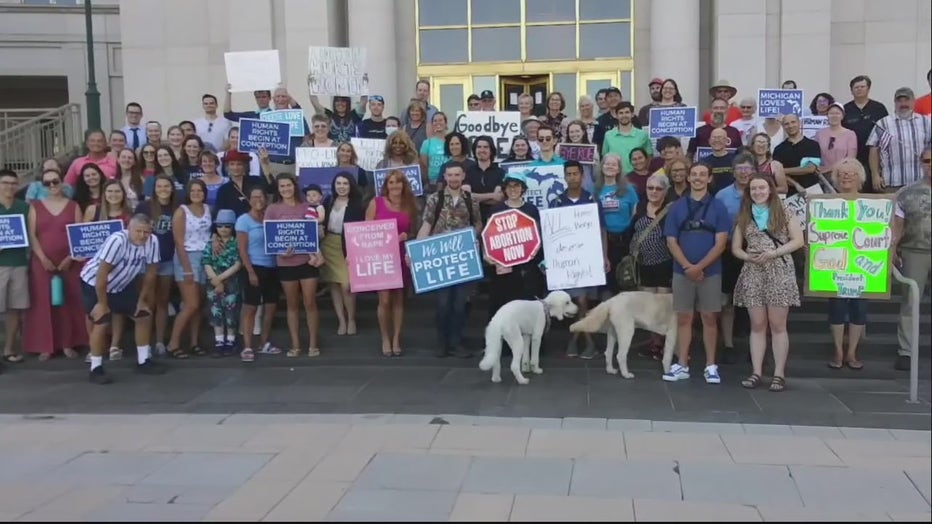 Not everyone who is anti-abortion said they think it should be outlawed completely. Some believed certain cases should be allowed, such as when the mother's life is at risk.

Gov. Gretchen Whitmer said that she will fight to keep abortion legal in Michigan.

"I will do everything in my power as a woman, as a Michigander, and as your governor to protect women’s reproductive rights in Michigan," she said.

State Senate GOP Majority Leader Mike Shirkey called the court’s ruling a victory for those who believe in the miracle of life, while also signaling a willingness to compromise on the state’s abortion law saying, in part, "Despite our strongly held differences on this very personal issue, I believe there is common ground to be found."

In Detroit, pro-abortion rights activists marched through the streets.

"Hopefully the politicians will do the right thing and put some laws in place to protect access to abortion," Allison Cook said.

Organizers of a ballot initiative that would put the right to an abortion in the state constitution gathered many signatures as the mass of protesters marched downtown.

"If we get enough signatures it would be on a ballot later this year in November, and we can hopefully vote this into Michigan law," Ashley Anderson said.

The ballot initiative comes amid fears that a temporary injunction keeping abortion legal could be removed.

"That would be horrible. No one should be imprisoned. Everyone should have the right to their own choice, body autonomy," Nicole Olson said.

Protestors took to the streets of Downtown Detroit on Friday after the Supreme Court's decision to overturn Roe v. Wade was announced. Abortion is still legal in Michigan, but could become illegal.