Video catches man hanging off of the back of a vehicle traveling in I-94 through Metro Detroit. Credit: Metro Detroit News

DETROIT (FOX 2) - Video posted on Snapchat and then on Instagram shows a man dancing while hanging on to the back of an SUV on I-94 in Detroit.

The video shows the man holding onto the luggage rack of the white SUV as the car heads east on I-94 in Detroit.

The video starts with the man standing on the bumper while holding onto the luggage rack and bobbing his head. He then lowers his hips and takes his feet off the bumper.

The man recording the videos is continually screaming 'no' throughout the video and it gets louder at this point.

Then the man starts dancing as the car continues east on the highway.

The driver of the SUV gets out of the right lane - per Michigan law - for an emergency vehicle. The driver even remembered to use the blinker.

But the man on the back remains, hanging and dancing. Shortly after that, he hoists himself up onto the roof of the car. Turns around and scoots forward before lowering himself back into the SUV through a sunroof.

WATCH: Man dances on back bumper of SUV on I-94

The SUV did not appear to have any license plate or any other identifying features.

FOX 2 reached out to Michigan State Police to see if there was information regarding the dangerous stunt but police said they were unaware of anything like this.

This is the latest stunt involving cars on Detroit highways in recent months. In April, at least four people were spotted hanging out of an SUV as it traveled on I-96 in Detroit. 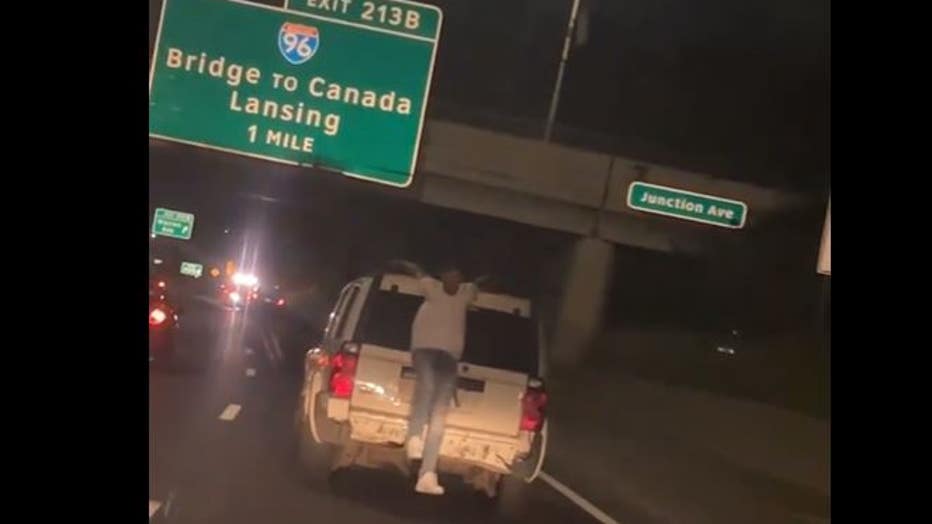 Video shows a man hanging and dancing on the back of an SUV on I-94 in Detroit.