A fatal house fire in Detroit left one dead and another hospitalized with injuries after a blaze broke out in a structure in the 20500 block of Rogge on the city's west side.

TUESDAY NEWS HIT - One person has died and another was injured in a house fire on Detroit's west side early Tuesday morning.

Those living in the house at the time say they had to jump from the second story window to escape the blaze, which has encompassed much of the interior structure by the time crews arrived.

Detroit firefighters responded to the 20500 block of Rogge near Eight Mile and Van Dyke around 1:15 a.m. after reports of people being trapped in a home that was on fire.

When crews arrived, three of the occupants had escaped, but two others were still stuck inside.

After entering the home, crews found one man dead and rushed another to the hospital. 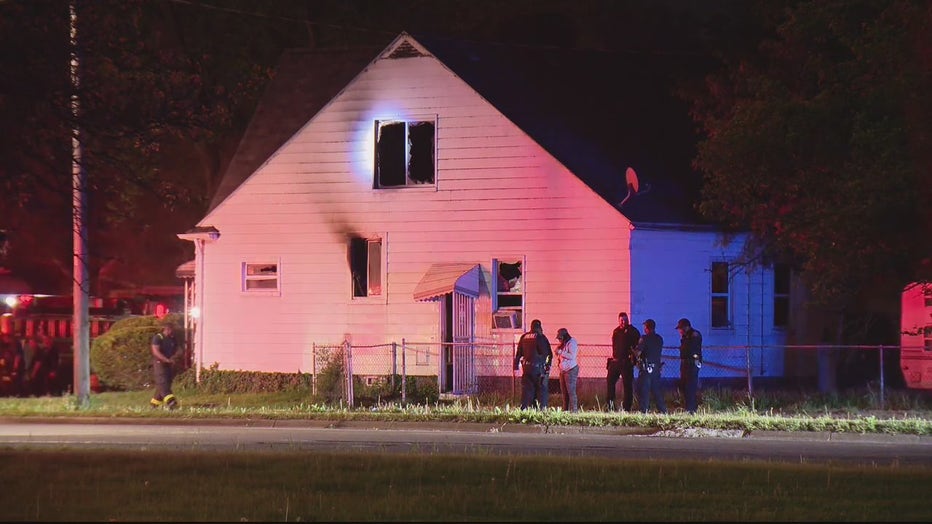 Occupants living at the home told FOX 2 that deadbolts on the door may have impeded escape.

Former Vice President Mike Pence is expected to visit Oakland County for a series of education-themed events on Tuesday. Pence's visit is scheduled around 2:15 p.m. at Rochester Hills, where he will address a student assembly before participating in a roundtable discussion with parents.

He's expected to be at Lutheran Northwest High School for about an hour.

Pence's visit is his first back to Michigan since his time in office ended in January 2021. It's a timely visit for the former vice president, who has been making stops at several states in recent weeks.

The nature of his visit to Michigan is about education policies and whether students at private schools should have the option to receive scholarships. The assembly begins at 2:15 a.m. and Pence will be at a roundtable discussion at 2:50 p.m. After the afternoon, Pence will attend a fundraiser for Tom Barrett, who is running for Congress against Democrat Elissa Slotkin.

On a Saturday afternoon in Buffalo, one man’s hatred fueled the killing of 10 people — mostly African-Americans — and shattered the hearts of their families.

This wasn’t the only mass shooting this weekend, but it is one that is being investigated as a hate crime. It re-opens a wound for Black people in America, which never seems to heal, according to one clinical psychologist. As a city heals and investigators work to get more answers, our nation’s leaders are speaking out against racism. And that includes faith leaders in Detroit.

"First of all, I think that we must recognize that there is a problem. we must deal with it," said Dr. Wendell Anthony, pastor Fellowship Church. "We must talk about it. People are talking about, 'We don’t want to talk about Critical Race Theory.' Well, we have a critical race situation in America."

Anthony laid the blame on divisive political rhetoric that has been enabled by GOP leaders. "So until good white folk, along with good Black folk, speak up, stand up, pass laws, implement policies, and enforce them, we will continue to see these situations occur," he said.

The Spruce Street footbridge crumbled beneath Ely Hydes last Monday - and he has the gnarly scrapes and bruises to prove it. "Now I’m just thinking how many of these bridges are decrepit death traps," he said. "We heard the crack. I remember making eye contact with him, and then I thought, 'Oh (expletive),' then I fell."

Mid-sentence on the way to the Tigers game with a buddy last Monday Ely Hydes dropped 10 feet, and just missed the Lodge Freeway below. "A couple more feet and it could have been lights out," he said. It is not something this Detroit attorney wants to even think about.

"I live right in Corktown and there is a pedestrian bridge I take every time I go downtown. (I've) been doing it for 10 years. My kids cross it." He got caught on twisted metal as he fell onto the concrete part embankment below. He says his torso "is basically a huge bruise."

Pedestrian bridge over the Lodge crumbles, dropping man 10 feet below

The Spruce Street footbridge crumbled beneath Ely Hydes last Monday - and he has the gnarly scrapes and bruises to prove it.

Diane Cross of MDOT says an inspection for the bridge was scheduled at the end of the month. However, the last time it was inspected, it received a FAIR rating, meaning it was operational. "I totally understand the fear, obviously we would all have that, but in my eight years of being here, this is the first time that I’ve heard of this," Cross said.

Infant formula maker Abbott says it's reached an agreement with U.S. health officials to restart production at its largest domestic factory, a key step toward easing a nationwide shortage tied to the plant's shutdown earlier this year.

Abbott did not immediately detail the terms of the agreement reached with the Food and Drug Administration, which has been investigating safety problems at the Sturgis, Michigan, facility. The consent decree is a binding legal agreement between the company and the federal government.

After production resumes, Abbott has said it will take at least eight weeks to begin shipping new product to stores. The Biden administration has come under intense pressure over the last week to do more to ease the shortage of formula that has forced parents of infants to go to significant lengths to feed their children.

Abbott's plant came under scrutiny earlier this year after four infants became sick with bacterial infections after consuming powdered formula from the Michigan factory. Two of the babies died.

Temperatures will dip into the high 60s Tuesday, a slight tumble from Monday's high, as well as highs over the weekend. Conditions will get even cooler Wednesday before rebounding quickly Friday.

Plenty of sunshine today with slightly cooler temperatures. Rain returning to the area Wednesday. Meteorologist Lori Pinson has your forecast. Enjoy your day!

Tesla CEO Elon Musk says his deal to buy Twitter can't move forward unless the company shows public proof that less than 5% of the accounts on the social media platform are fake or spam.

Musk made the comment in a reply to another user on Twitter early Tuesday. He spent much of the previous day in a back-and-forth with Twitter CEO Parag Agrawal, who posted a series of tweets explaining his company’s effort to fight bots and how it has consistently estimated that less than 5% of Twitter accounts are fake.

In his tweet Tuesday, Musk said that "20% fake/spam accounts, while 4 times what Twitter claims, could be much higher. My offer was based on Twitter’s SEC filings being accurate."

He added: "Yesterday, Twitter’s CEO publicly refused to show proof of 5%. This deal cannot move forward until he does."