The problems for Ford and General Motors continues to pile as Ambassador Bridge access has forced both companies to shutter plants while it manages the fallout of a protest at the international crossing.

THURSDAY NEWS HIT - While the Ambassador Bridge is technically open, by all accounts the remaining access available to drivers traveling from Canada into the U.S. is also shut down.

Speaking with a local radio station in Windsor Thursday morning, the Mayor Drew Dilkens reiterated that while the bridge is technically open, "It really isn't."

"This is getting really tiring. Those folks need to go home. This will not last for long, that I can assure you," he said during an interview on AM800 CKLW, a Windsor-based radio station.

However, the mayor argued that any response by police or any other municipality would need to be measured. He couldn't just have all of them removed at once, Dilkens said.

He also said that many of the protesters were "mentally unstable" and dealing with people's temperament is a "real issue."

Windsor Police said in an email that the Ambassador Bridge is not closed US Bound, but "the presence of demonstrators are making it difficult to access the bridge."

"We are urging all motorists to avoid both access points to the bridge. All those attempting to cross the Ambassador Bridge should expect significant delays," wrote Constable Talya Natyshak, a member of the Windsor Police Service's Corporate Communications Unit.

What started as a small protest by a group of Canadian truckers upset with the country's COVID-19 vaccine mandate has turned into an international incident affecting regional trade and resulting in the shuttering of multiple automotive plants that rely on open access on the Ambassador Bridge.

RELATED: 'I understand why, but it makes it harder on us': Canadian trucker talks lost time, money

Trucks have instead been rerouted to the Blue Water Bridge in Port Huron. But that has come with its own headache as the bridge is unable to manage the surge in traffic that would usually drive through Detroit and into Windsor.

Related: Trucker shortage combined with Canadian protests a 'crisis on top of a crisis' for supply chain

Several dozen demonstrators could be seen outside Thursday morning. Many were hovering around space heaters and grills, with big rig semi-trucks in the background. A sign read "Leaders Dont Hide."

The bridge protest is the latest struggle for businesses that are already suffering from supply chain shortages due to the pandemic. "It is a crisis on top of a crisis," said the president of the Michigan Agri-Business Association.

"I can tell you all of them right now are scrambling to find enough drivers especially drivers who can cross the border into Canada," said Chuck Lippstreu.

It's also forced many truck drivers into the middle of a events out of their control. But even so, they're losing money as a result.

"Coming back last night I didn’t have enough hours to get back, so I waited until this morning - it was three hours to get back," Seth Allen told FOX 2 Wednesday. "It adds time to a run and at the end of the week, we get less miles than we normally get, and we get paid by the mile."

A Mercedes G63 had a sticker price of $184,000 in 2019. But when the vehicle finally arrived at a Bloomfield Hills dealership last week, the asking price rose an extra $120,000. "They're taking advantage of a consumer, and it's just unacceptable," said attorney Azzam Elder.

"For 25 years, my client and his family bought 11 cars from them," Elder said. "So when they drive off the lot, the price tanks." But not these vehicles. Despite no-down-payment or a written contract, the buyer did get Mercedes to specially custom-make an olive green mango exterior with red and black interior.

"Because we have Covid he actually bought a car two years ago and now he can drive off the lot, and maybe it's going to retain its value. I mean is that too much to ask for, of Mercedes-Benz? I don't think so."

When the vehicle was finally delivered last week, Mercedes-Benz of Bloomfield Hills wanted an extra $120,000 above the sticker price.

However, in a statement by Mercedes-Benz USA, it says: ".The MSRP is a suggested price. While we do not encourage markups for specific, high-demand models, the final sale price is ultimately negotiated between the dealer and the customer."

A shooting investigation at a Farmington Hills hookah lounge alleges the owner and three employees were caught trying to cover up the crime. The owner of Vibe Hookah Lounge was charged – and three of his employees too, all allegedly were trying to cover it up and toss evidence after the January 29th early morning shooting.

"We also observed staff then cleaning the crime scene and concealing evidence, the staff then left with that evidence and closed the business," said Farmington Hills Police Chief Jeff King.

King says two men, Devonte Johnson of Detroit and a 17-year-old friend – who is charged as a juvenile - retaliated against two other customers who walked into the hookah spot. They were hurt, but will recover. The suspects were eventually caught by U.S. Marshals.

A shooting investigation at a Famington Hills hookah lounge alleges the owner and three employees were caught trying to cover up the crime.

During that investigation - the owner of the establishment, Amara Sinawi, is said to have lied to police about the shooting after trying to cover it up. The chief says his employees helped. One of them, Baher Hana, was arrested with 64 pounds of marijuana on him. For that, and possible other crimes – more charges could be on the way.

Charlita Knox and her husband Mark left the banking business for the baking business. "She's mostly the baker - certified pastry chef. Me, I have a bachelor's in business, so we just came together, as a married couple, left our jobs and here we are," Mark said.

However, the couple said there wasn't anywhere in Detroit for them to get supplies. "All bakers, no matter if you're a professional, you're a home baker, or you're just a hobby baker, they have to go in the suburbs for their cake supplies," she said. "It's not one local, so it was definitely one needed within the city of Detroit."

So the couple decided to open their own bakery supply shop – Crummy's Cake Supply and Studio. Charlita said her nickname is Crummy because she would always make a mess while helper her Nana bake. "I was just her little assistant, and I would just have crumbs everywhere," she said.

A new baking supply store is opening this weekend in Detroit. Owners Charlita and Mark Knox said it was necessary because there was no where to get supplies in the city.

Now, she will be selling Nana Delores's secret recipe cake mix at her store. Crummy's also has a small classroom and a kitchen, and Charlita teaches classes. Crummy's opens Saturday at 7114 W. 7 Mile Rd. "We already had a lot of people already calling. Actually, they cannot wait until we open because we're local, so we definitely have the supplies that they need," she said.

Cowboy Will does some training

If you thought you saw a man riding a cow in Detroit recently, you aren't hallucinating. That's just Cowboy Will. Video captured over the weekend showed a man riding a heifer through the parking lot of a gas station on 7 Mile. Cowboy Will volunteers at Pingree Farms, an urban farm near I-75, and is training Hope.

"I'm used to it, but my family hits me up and they're like, ‘Oh my goodness, there's a guy on a cow,' and I'm like, ‘Oh, you saw Will?’" said Aaron Hale, who works at Pingree. Hope is a heifer – a female cow who hasn't had a calf. She's one of many animals that live at the farm.

"Pingree Farms is one of the greatest urban atmospheres that a lot of people don't even know about," Cowboy Will said. The farm includes a petting zoo, has fresh produce for the community, and has even hosted goat yoga.

Cowboy Will takes cow for a ride through Detroit streets

Yes, there is a man who rides a cow around Detroit. His name is Cowboy Will, and he's from Pingree Farms.

"In the middle of the neighborhood there is a farm with animals," said Clarence Price, a fan of Pingree Farms. "It's a hidden jewel within our city." The farm is always looking for volunteers. If you'd like to help, click here.

Some snow and rain is expected Thursday, but the real weather news this week will be the seesawing of temperatures from near 40 degrees Friday to 18 degrees over the weekend. Then, temperatures will rebound to 45 degrees next week. 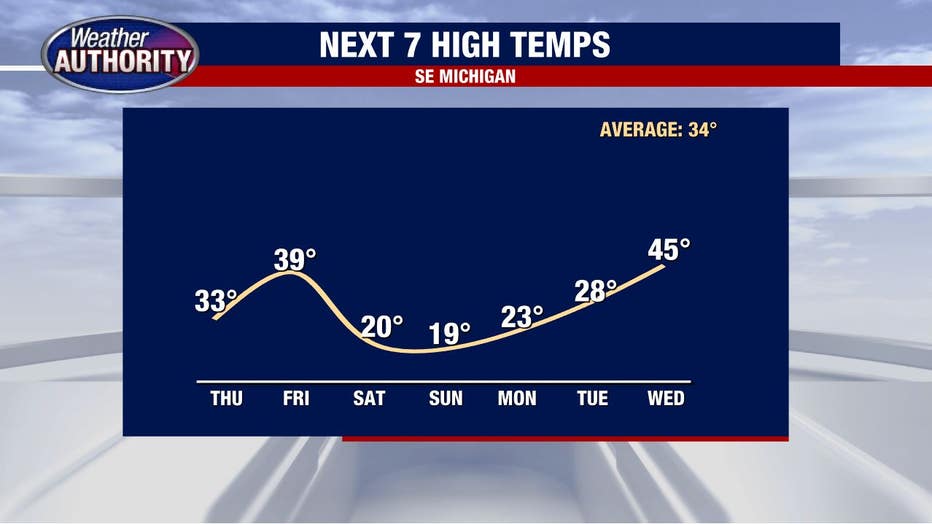 Nathan Chen remembers making the long drive with his mother from his home in Utah to Rafael Arutyunyan's training base in Southern California. He had started out in figure skating just a few years earlier, using his sister's skates and sleeping in the car to follow his Olympic dreams.

Ten years later, Chen sat alongside Arutyunyan as his scores were read and that dream realized.

With a nearly perfect free skate on the heels of a record-setting short program, the 22-year-old Yale student walked away with the gold medal at the Beijing Games on Thursday. He became the first American figure skating champion since Evan Lysacek in 2010 and capped one of the most dominant four-year runs in the history of the sport.

"My mom and I grew up quite poor. We really didn't have much money," Chen said. "She would just scrap together some dollars to try to pay Raf, and Raf obviously knew about the situation and thanks to the kindness of his heart, was able to just continue taking me in, and taking as much money as we could provide him."