James and Jennifer Crumbley appeared in court on Monday for a hearing regarding motions to move case and stop prosecutor from discussing Oxford High School shooting case. It was also revealed that their attorneys intend to call their son to testify.

SOUTHFIELD, Mich. (FOX 2) - Before Ethan Crumbley is in court for his own trial, he could appear in court to testify on behalf of his own parents after their defense team announced in court that they plan to call the accused Oxford High School shooter.

On Monday, James and Jennifer Crumbley appeared in court for a hearing regarding several motions their defense team had filed in an attempt to dismiss evidence, have the case moved, and to get the Oakland County Prosecutor's Office to stop discussing the case. The judge agreed to some motions to dismiss some evidence, rejected the attempt to move the trial, and ordered both the prosecution and defense to stop talking about the trial in public.

But towards the end of the hearing, the matter of when the trial will take place was brought up - and that's when a bombshell was dropped by the defense attorneys: they plan to call Ethan Crumbley to the stand to testify on behalf of his parents.

Both James and Jennifer are facing involuntary manslaughter charges after their son Ethan Crumbley is accused of killing four classmates last year.

The Crumbley parents are currently set to go on trial starting on Oct. 24, 2022. Judge Cheryl Matthews said she's committed to the date but both the defense and prosecution said they would file motions in the case. Judge Matthews admitted that it could be a challenge to get a jury in place in late October in time for a trial to be complete before the holidays or the anniversary of the shooting, on Nov. 30.

"There's a number of concerns this court's going to take. This is going to be a great deal of manpower. They really care. I don't like to have a jury sent home during Thanksgiving," Judge Matthews said. "I don't want a Christmas jury. And so I'll do all within my power to try it on October 24th."

Attorney Shannon Smith said she was concerned about the parents' trial going first, Judge Matthews questioned why it was important in this case.

"Why do I care?" Judge Matthews asked.

Smith explained they intend to call Ethan to testify.

"We need him as a witness in this trial. Even if he gets up there and has to plead the Fifth (Amendment)," Smith said. "He can answer questions that are not covered by the Fifth Amendment. So we can call him as a witness. And I was just thinking that if his trial is scheduled after, I suppose he'll still plead the fifth."

The Fifth Amendment protects a person from being compelled in any criminal case to be a witness against themselves. In other words, you cannot incriminate yourself while on the witness stand.

Assistant Prosecutor Marc Keast questioned how Ethan could testify in the case and Judge Matthews said she was also wondering how he would be utilized.

"We're going to call him. We need him to testify to information not related to his actual shootings, but related to extraneous matters that are important in the case," Smith said.

McDonald argued that the defense team is trying to use Ethan.

"As an offer of proof they want to call their son to try to somehow diminish - highlight his role instead of his parents. I'm just not sure how that's relevant," McDonald said.

More: Crumbley parents' defense says prosecutor has to stop slamming them in the media

Judge Matthews said they had a right to call him but wondered how he would take the Fifth Amendment.

"There are certain questions we would just not be able to ask. We do understand that we have other questions we need to ask. And this is not about the defendants wanting to throw their son under the bus or make him look bad. This is about our clients defending the case," Smith said.

So will the case go to trial in October? Lehman said she didn't know if it would be possible. To that, Judge Matthews said they should put their request for an adjournment in writing.

"I am very cognizant that both of your clients are sitting in jail. And I'm very concerned about that. And I want to give them a speedy trial. I also I don't know that I can end the suffering of the victims in this case, but the longer it goes on and on," Judge Matthews said.

So which case will be first? McDonald said judge Kwame Rowe, the judge presiding over Ethan's case, has expressed a desire to go second.

"The court that in that case, I believe his attorney and the Court have expressed an interest to have his case tried after this one. And so I think we just I just want to make sure the court's aware of that and defense counsel, because if their position is they want this right after, we have a problem. So we're ready to go whenever you set the trial," she said.

Judge Matthews confirmed she's still planning to move forward with Oct. 24 as the start of the trial and that she has spoken with Judge Rowe about the two cases.

"There are obviously concerns that you made these motions because it was obvious that you might be calling the shooter," Judge Matthews said.

For now, the Crumbley parents will move forward with an Oct. 24 trial date. Ethan, meanwhile, has been pushed back to January 2023. 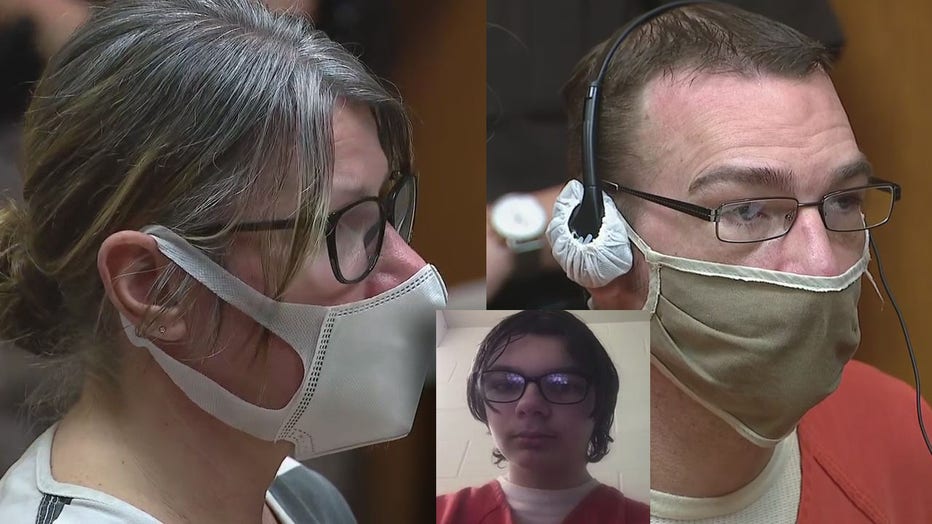 James and Jennifer Crumbley appear in court on Monday, June 27. Their son, Ethan Crumbley, is expected to testify in their defense during their trial in October.