A man’s attempt at drifting at a Detroit gas station ends in a fiery crash at the BP on Joy Road and Southfield Sunday night.

DETROIT (FOX 2) - A man’s attempt at drifting at a Detroit gas station ends in a fiery crash at the BP on Joy Road and Southfield on Detroit's west side Sunday night.

"I saw him doing donuts," said witness Jacques Chisolm. "He was donuts and then he lost control and then he hit this pump."

Video of the stunt is courtesy of Heat in the D. Amazingly no one was hurt - and Detroiters who have nearly seen it all were stunned.

"Oh my goodness, that’s crazy," said Shantice Whiters. "They need to do something about this."

As firefighters put out the flames Sunday, the driver sped off and hit other vehicles on his way out. Detroit police recovered the SUV at a gas station at Warren and Southfield.

"We have that vehicle, we’re doing some further investigation," said Cmdr. Arnold Williams, Detroit police. "We are zeroing in on the person who was driving that vehicle, and we’re going to hold them accountable."

The explosive escapade is yet another glaring example of reckless driving in Detroit. DPD has ramped up efforts to crack down on drag racing and drifting.

The city is stepping up efforts to install speed humps to slow down speeding drivers that race through neighborhoods with little to no regard for stop signs or red lights.

"We’ve received over 20,000 requests from residents across the city and we will be installing 4,500 speed humps this summer," said Caitlin Mally-Marcon, Detroit Department of Public Works.

As DPD continues its investigation, the gas station employees say they are bleeding cash. Once the pump was destroyed, the rest became inoperable. 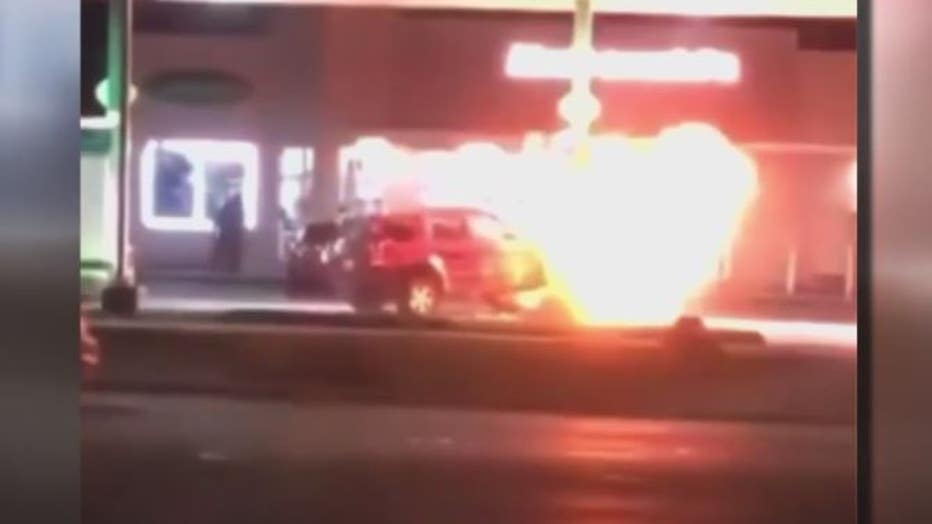 "We’re losing business, we can’t sell gas," said Ahmad Mhaisan. "Customers here, you have a busy area. They come in they’re upset, they’re leaving cussing him out, mad at my son. What are you going to do?"

Williams says cops can’t be everywhere to prevent this from happening, but Project Green Light will help them find and arrest reckless drivers.

Charger driver who did donuts around DPD cruiser arrested

"That’s what we really want people to understand: you may not see anybody around, but someone is always watching," said Williams.