THURSDAY NEWS HIT - As the numbers go, Michigan reported a near-record of daily COVID-19 cases on Wednesday - 6,008, almost breaking the record set a day before. Deaths have also been rising, with the state's deadliest day happening on Tuesday. On Wednesday, another 42 people died of the virus.

Meanwhile, two of Metro Detroit hospital chains have altered their visitation policy in regions getting hit the worst. But COVID-19 is also surging in West Michigan and the upper peninsula at faster rates. On a call with reporters Wednesday, the head of Spectrum Health said the state was heading in the wrong direction. But even with mitigation efforts, the company expects regional hospitals will hit their "capacity in a matter of days."

Not unlike the bulk of states in the U.S., Michigan's spiking COVID-19 cases it arriving just in time for flu season and colder temperatures. With the higher potential for transmission amid more spread of contagions, health experts believe the country is entering its most deadly phase of the pandemic.

Concerns have also reached a tipping point that hospital leaders plan to make a major announcement Thursday morning regarding the virus. FOX 2 will stream it on our website.

Not everything is doom and gloom, however.

To understand Michigan's latest numbers, a Beaumont doctor put them into context.

"If you look at the data, hospitalized patients are doing much, much better than they did before which is clearly excellent news. It's the same disease, so people are still getting sick but we have a couple of medications which seem to be having a very good effect," said Justin Skrzynski.

While it's similar demographics that are getting hospitalized, the outcome and experience are far different.

With warm weather gone but COVID-19 here to stay, Michigan restaurants face tough times ahead. As the virus spikes in the state, sending an increasing number of people to the hospital, there's little evidence of the second surge stopping.

With cold weather arriving, restaurants will be forced to close outdoor seating to accommodate patrons. But more people eating inside means more potential to spread COVID-19.

Northville has come up with a solution: The "European approach" to outdoor dining.

The city has had Main Street blocked off for months, expanding outdoor dining. A social district in place so people can enjoy a cocktail to go, just trying to keep people coming - to keep businesses going amid the coronavirus pandemic.

"Now we're looking at this heat in the street which is a new outdoor dining concept for the winter months," said Lori Ward director of the Downtown Development Authority.

Stands - or vending kiosks - where downtown restaurants will be able to sell specialty items on thier menus. And pods are heated, open-air spots where people can grab a high top table and stand there to eat, drink, and be merry.

"In an open-air environment - to kind of embrace the winter, instead of trying to keep it out," Ward said.

It required the fundraising of a Northville resident originally from Germany, who came up with $100,000 to pay for space heaters and kiosks.

Taylor police have been searching for a 15-year-old girl who was last seen 10 days ago when her mom saw her go to bed.

Gloria Alvarado went to her room around 9 p.m. Nov. 1. When her mom woke up, Gloria was gone, the screen window had been cut, and her phone had been left behind.

For 10 days Taylor police have been searching for a 15-year-old girl who disappeared in the night while her family was asleep - and the details around her disappearance are alarming.

"I see the curtain was hanging, the window was wide open, the screen was cut," she said. "Her phone is just laying on the bed (and) Gloria is not there.

Police have obtained a 14-second video from a neighbor that shows a car pulling up in front of Alvarado's home and a man getting out. But that's about as much evidence as law enforcement has.

Gloria has no past history of running away and is known as a straight-A student. Taylor police are working with outside agencies on the case.

The Junior Reserve Officers' Training Corps took to the streets on Veterans Day to protest Detroit Public Schools, accusing the district of shortchanging them since 2010, taking away annual raises, and freezing their pay.

"We all collectively went back eight years, 10 years, and looked at our pay and noticed they’ve taken thousands from us," said Lavar Johnson. "Once we added it all up for the 50 plus instructors over that period that we had. It’s over $1.5 million that they owe us."

Veterans working as instructors at DPSCD and training kids coming up through the JROTC brought their complaints to the teachers union who filed a grievance against the district.

"And we presented, once again, all this information to the district and they denied it, saying we’re going into arbitration," said Johnson.

In a statement from the assistant superintendent, Chrystal Wilson said the instructors expected their salary to be consistent with their military pay, which is higher than what teachers get paid.

"This contradicts the salary schedule of the collective bargaining agreement with the Detroit Federation of Teachers."

There was little light at the end of the tunnel for one delivery man, who thought his Amazon Delivery Van would fit under a bridge fit for golf carts. 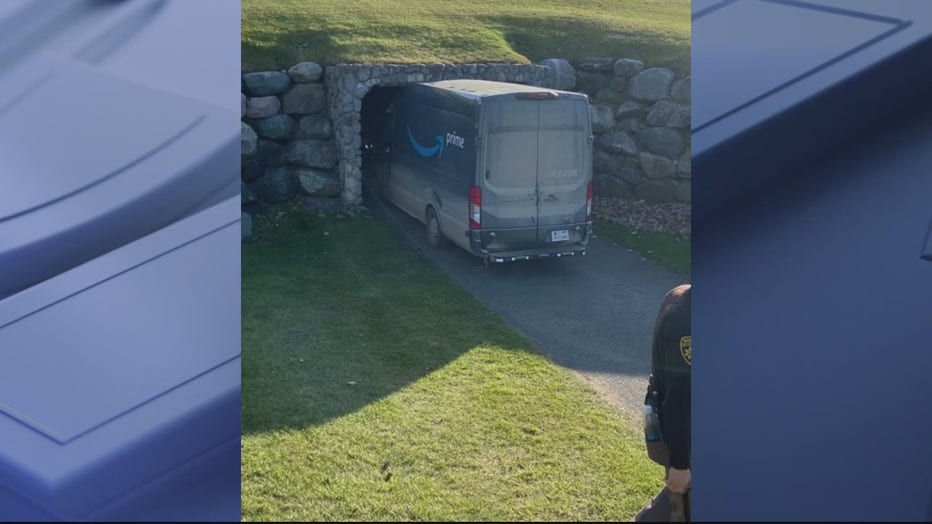 Turning off of Market Street onto the Boulder Point Golf Course in Oakland County, the driver thought he could wedge his vehicle through a service tunnel fit for two golf carts.

A tow truck was called to pull out the vehicle, which took about an hour and a half to be unwedged.

A tow truck was called to pull out the vehicle, which took about an hour and a half to be unwedged. A second Amazon Prime van arrived at the scene to transfer the packages out for delivery.

Detroit police are investigating a triple shooting in the area of Ralston and Adeline.

Three men ages 16, 18, 22, were allegedly sitting in a vehicle when a Chrysler 300 pulled up and someone began firing shots.

All three men were struck and taken to local hospitals, where they were treated for non-life-threatening injuries.

Anyone with information is asked to please call Detroit Police Department’s Twelfth Precinct at (313) 596-1240, or Crime Stoppers at 1-800-Speak Up.

1. FOX 2 lost Ron Savage in 2017 after he suffered a heart attack during a training drill as a part-time firefighter. His son, Ronnie, has followed his dad into the world of first response by enlisting in the Army.
2. A new commercial from Antonio's calls out lawmakers to better help Michigan residents while pleading with people to apply for a job.  "We need to figure out a better way to put people back to work in a safe environment."
3. Cleary University, a Livingston County-based campus is switching gears after an off-campus party led to an outbreak of COVID-19 among students.
4. A University of Michigan has raised $30,000 to build a sustainable school in Malawi.
5. A group of Detroit activists is asking Detroit police why election-day protesters weren't treated like protesters were over the summer. "What they conveniently left out, they were peaceful," Detroit Police Chief James Craig retorted.

If Wednesday felt like a rude awakening, prepare to be awoken again Thursday, and Friday, and over the weekend too. Temperatures will reach 52 before dipping to 36 overnight.

It’s a frosty Thursday morning with bright skies on the way!

The cooler air is here to stay

The U.S. hit a record number of coronavirus hospitalizations Tuesday and surpassed 1 million new confirmed cases in just the first 10 days of November amid a nationwide surge of infections that shows no signs of slowing.

The new wave appears bigger and more widespread than the surges that happened in the spring and summer — and threatens to be worse. But experts say there are also reasons to think the nation is better able to deal with the virus this time around.

“We’re definitely in a better place” when it comes to improved medical tools and knowledge, said William Hanage, a Harvard University infectious-disease researcher.

Newly confirmed infections in the U.S. were running at all-time highs of well over 100,000 per day, pushing the total to more than 10 million and eclipsing 1 million since Halloween. There are now 61,964 people hospitalized, according to the COVID Tracking Project.