A 19-year-old in a Ford Fusion allegedly fired on a Chevrolet Avalanche which had an 18-month-old boy inside. Thankfully there were no injuries and after a brief pursuit, Southfield police made the arrest.

SOUTHFIELD, Mich. (FOX 2) - An 18-month-old boy was among three people in a car that were targeted in an alleged road rage incident that started in Detroit with a shooting, led to a chase in Southfield, until the suspect was ultimately arrested back in Detroit.

In a press conference held Wednesday morning, Southfield Police Chief Elvin Barren laid out the details in the shooting and chase that hit up the 85 MPH on 696 and ultimately ended with the suspect's vehicle being disabled by an officer.

A call came in around 11:20 a.m. on Tuesday from a victim who said they were in a Chevrolet Avalanche and trailing a black Ford Fusion after they were shot at multiple times. In the car with the caller was a woman and an 18-month-old boy.

The victim said they were following the driver on the Southfield Freeway before hopping onto the Lodge and then eventually getting off at Evergreen. At the Evergreen and 11 Mile interchange, also the 696 intersection, Southfield Police caught up to the suspect, but he didn't stop.

Instead, the Fusion swerved around traffic and hopped onto the eastbound 696 ramp. At times, speeds hit 85 MPH as police chased the driver through traffic. Near Campbell in Royal Oak, the driver was able to get away for a bit but police were still on him. 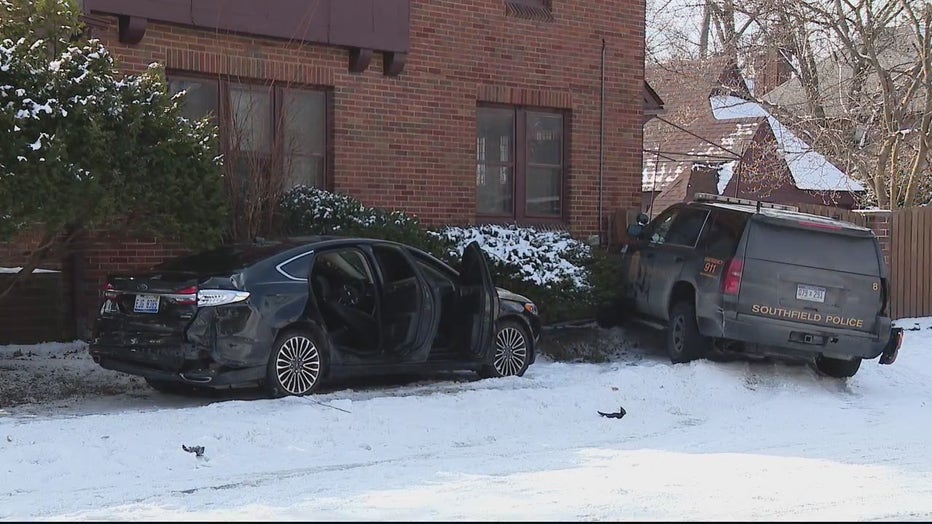 Barren said they later found him near Woodward and 9 Mile and tracked him back into Detroit. At Parkside and Santa Clara, Southfield Police performed what Barren called a P.I.T. (Precision Intervention Technique) to bring the car to a stop. Dashcam video shows the officer chasing the car on icy residential roads and, when the car attempted to turn, the car appeared to go off the road.

The officer then further stopped the car and pushed him into bushes nearby.

Bodycam video shows the Southfield Police Officer getting out of the car with his gun drawn and demanding the driver put his hands in the air. The officer told the man "We're trained. Just listen to me and we're all going to be safe."

The Southfield Police Department released video on Wednesday of a police chase and arrest of a man wanted for shooting at another car in Detroit.

The driver, a 19-year-old Inkster man with a criminal history, was arrested and Barren said he expects him to be arraigned later in the day on Wednesday in Wayne County.

Barren credited the professionalism of Southfield Police in taking the suspect into custody without injury to the suspect, police, or innocent bystanders - including the toddler in the victim's car.

"So very thankful that the child was not injured," Barren said. "We take all crimes serious, whether they occur in Southfield or surrounding jurisdictions, we're going to get involved."

Barren said the shooting is believed to have happened after a road rage incident between the two cars involving a red light and the suspect's vehicle following too close.

The victims said they believed they were shot at between 5 and 7 times. Detroit Police recovered 3 shell casings and Barren said they found ammo in the suspect's car but did not find a gun.

You might recognize Southfield Police Officer Cole Armil in the reflection of the window during the arrest- he was on FOX 2 last week – after he was attacked by a man outside his own department.

A busy week for the officer with another, safe arrest. White said the weapon used by the suspect was likely "discarded in his travels."

The Detroit Police Department will handle the investigation but Southfield Police will release their video and more on Wednesday. Click below for a live stream of the press conference.