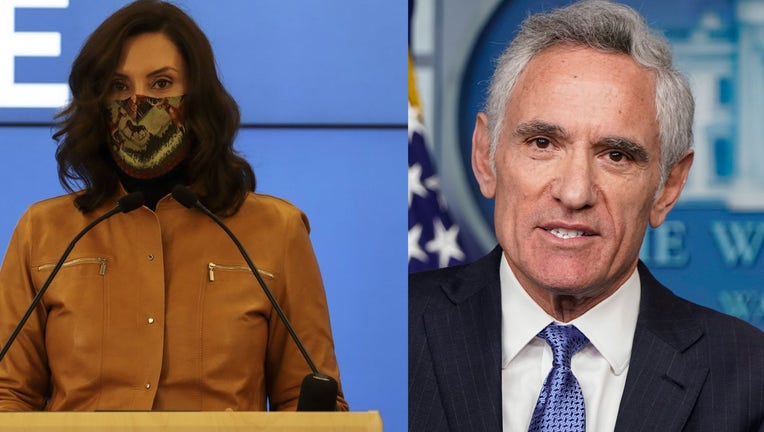 Michgan Gov. Gretchen Whitmer speaks during her COVID-19 update on Sunday, Nov. 15. Dr. Scott Atlas, member of the White House's coronavirus task force, speaks at a news conference in the briefing room of the White House on September 23, 2020 (Photo

Dr. Scott Atlas retweeted an editor of the Huffington Post who sent out a message about the state's pause of many Michigan businesses. In his retweet he said "The only way this stops is if people rise up. You get what you accept."

Three hours later, Atlas said he was not talking about violence but was encourage people to vote and peacefully protest.

That update, however, did not change the message received by Whitmer who said lack of federal leadership has exacerbated the problem.

"We are in the midst of the worst weeks of this pandemic. We have been going through this for nine months and right now the numbers are as bad as they have been at any given time and so we have to take aggressive measures," Whitmer said on MSNBC's "Morning Joe". "With the vacuum of leadership in Washington D.C., it's on the states' governors to do what we can to save lives.”

Whitmer is not the only one. Dr. Anthony Fauci, the nation's leading infectious disease expert, said Atlas was wrong.

The history between Gov. Whitmer and President Trump has been tenuous, to say the least, dating back to the beginning of the COVID-19 pandemic.

In April, after Whitmer's stay-home order was a month old, Trump tweeted two words: LIBERATE MICHIGAN. The message was part of a series of tweets where he also encouraged the 'liberation' of Minnesota and Virginia, states at the time that were under similar stay-home orders.

Trump has referred to Whitmer as 'that woman from Michigan' and has been critical of her orders, even saying that her orders applied to residents but not to her husband. That was in reference to controversy in May when her husband, Dr. Marc Mallory, seemed to use his authority as her husband to encourage a company to get his boat in the water faster for Memorial Day.

On September 10, after Trump said in a private conversation earlier this year that he "wanted to always play it down," Whitmer said Trump was the 'biggest threat to the American people'.

When the Governor was threatened and a plot to kidnap her was foiled in October, Whitmer said Trump was encouraging domestic terrorism.

"10 days after that was uncovered, the president is at it again, and inspiring, incentivizing and inciting this kind of domestic terrorism," Whitmer said on Oct. 18. "It is wrong and it has to end."