MONDAY NEWS HIT - One woman is dead and two others are injured after a head-on crash on Outer Drive happened early Monday morning.

Around 3:30 a.m., a woman driving a Jaguar down the wrong way on Outer Drive without her headlights on crashed head-on with another sedan.

The crash killed one woman and injured two others, who were taken to a hospital with an unknown amount of injuries.

A man who saw the crash likened the incident to a movie.

"No words can describe what I've seen. Out of my 37 years of life, I cannot - this is like off of a movie," said Claxton Minter. "I'm just waiting for Bruce Willis to pop up."

Emergency crews were forced to use the jaws of life to rescue the victims who were trapped in their vehicles.

Scenes from the crash show the entire front half of a car completely destroyed. The other car also had extensive damage but appeared a little less totaled.

Police were at the scene for several hours before clearing out Monday morning. 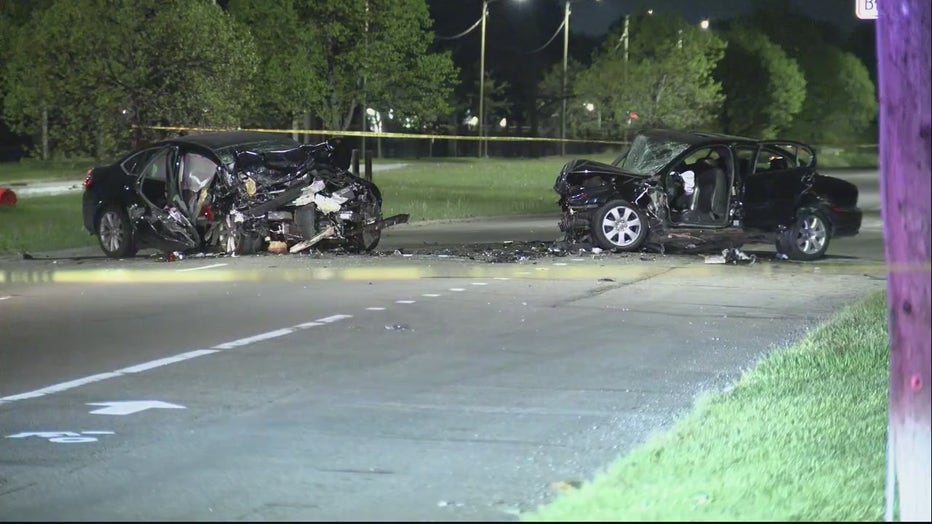 The crash happened at Outer Drive and Greiner Street.

Police said that speed likely played a factor in the crash.

Starting Monday, anyone that convinces someone else to get a vaccine will receive $50 from the city of Detroit. The "Good Neighbor" program introduced last week will help boost vaccine rates in the city, the mayor said Wednesday.

Mike Duggan is banking on the idea people will be more convinced to get a shot if their friend tells them to rather than if an expert tells them to. "Nobody wants to listen to Dr. Fauci or me or Gov. Whitmer tell them one more time to take the vaccine," he said. "But they will listen to their neighbors."

Under the expanded program, registered Good Neighbors can earn $50 gift cards for every Detroiter they usher through the vaccination process. From scheduling residents for their first dose appointments starting Monday, to driving them to vaccination sites.

The program is using grant money for expansion. Residents can go to the TCF Center, Northwest Activities Center, and community churches on the weekends.

Nine organizations across Michigan will share $650,000 for suicide prevention programs.

It will establish the Suicide Prevention Support for Health Care Clinics Working with Michigan's Health-Disparate Populations initiative. The program offers grants to develop evidence-based and sustainable programming aimed at decreasing the rate of suicide attempts and deaths by identifying children or adults who may be at risk.

The groups involved include: The Arab Community Center for Economic and Social Services in Dearborn, Black Family Development, Inc. in Detroit, Child and Family Charities in Lansing, and the Mid Michigan Health Foundation in Gladwin, Clare, Ogemaw and Gratiot counties are among the organizations receiving funding.

- Courtesy of the Associated Press

State Rep. Bryan Posthumus left his farm in Oakfield Township Friday night in a Jeep, before driving off the road, hitting a mailbox, and rolling over. He was later arrested for drunk driving.

According to a release from the lawmaker's office over the weekend, Posthumus said he was disappointed in himself for putting others in jeopardy. "There is no excuse for what happened, and I take full and complete responsibility for my actions."

No one else was injured, Posthumus had a blood alcohol level of 0.13, when Michigan's legal limit is .08.

The 36-year-old said he plans to attend an Alcoholics Anonymous meeting. He was previously arrested for driving while intoxicated in January of 2013.

State of COVID-19 in Michigan

U.S. Rep. Brenda Lawrence will be touring Beaumont Health's vaccine clinic as part of mass vaccination week as the state continues encouraging residents to get scheduled for a shot.

Currently, 50% of the state has gotten at least one shot - only 5% away from hitting milestone number one that would release restrictions on business. But the rate of vaccine administration is falling. Compared to its peak in early April when almost 400,000 people got their first shot, only 103,261 received their first dose.

Concerns about equitable access and skepticism surrounding have been brewing for a while, even as other groups continued getting their shot. Now that supply is outmatching demand, the state will have to work harder to continue improving its numbers.

Other good news is the declining rates of new infections around the state are now present in almost every Michigan county. Test positivity still remains high, but the state's seven-day average is now half of what it was at its peak earlier in April.

A humid end to the weekend has kicked off some morning and afternoon showers for Monday. It could be a wet week with rain expected throughout.

Wet weather returns with the start of the work week

Rain showers and cooler air will fill in this week.

The White House has been under pressure from lawmakers at home and governments abroad to join an effort to waive patent rules for the vaccines so that poorer countries can begin to produce their own generic versions of the shots to vaccinate their populations.

The U.S. has been criticized for focusing first on vaccinating Americans, particularly as its vaccine supply begins to outpace demand and doses approved for use elsewhere in the world but not in the U.S. sit idle.