Plane crashes after taking off from Macomb County airport

Three people were rushed to a hospital with severe burns and other injuries after the plane they were in reached only 70 feet in the air before crashing. A 6-month-old golden retriever that was also on board has yet to be accounted for.

MONDAY NEWS HIT - Three people were injured in a plane crash shortly after taking off from a Macomb County airport Sunday afternoon. They were taken to a hospital where they were last reported in critical condition.

The crash happened near the Ray Community Airport in Ray Township around 3 p.m.

Authorities are expected to give an update on the status of the passengers later Monday.

According to preliminary information, the small aircraft only made it 75 feet into the air before it crashed.

"Every morning I get to see the guys taking off and as they're taking off over, it's spectacular to watch them," said Tracy Stefanides. "I will wave to them as I'm seeing them take off and they'll flash their lights at me. So to hear this happen is very scary." 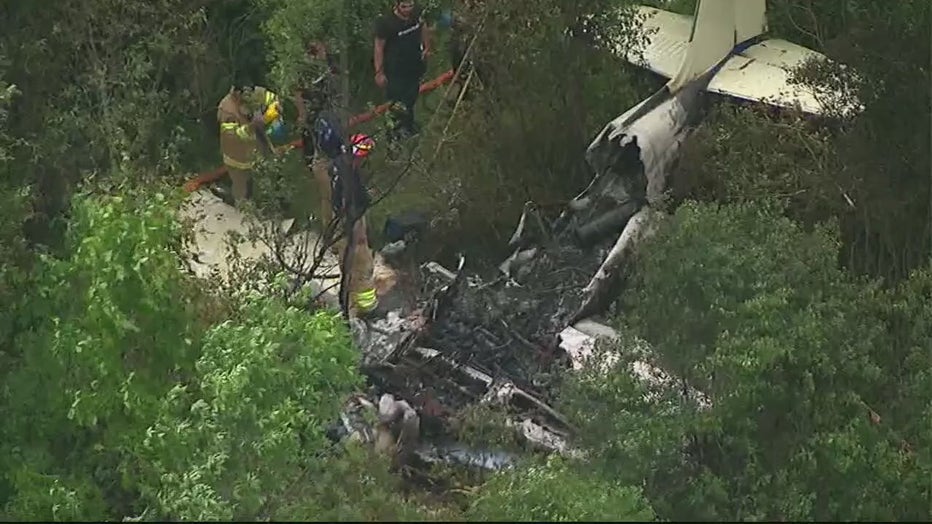 Aerial footage of the plane that crashed in Ray Township.

Also on board the plane was a 6-month-old Golden Retriever who hasn't been recovered as of Monday morning. Neighbors that live nearby have been searching for the pet since.

When Michigan gas prices could dip below $4

Another steep drop in gas prices was recorded last week as Michigan petrol costs fell 19 cents. It's a 65 cent drop from last month as prices hit $4.44 per gallon for regular unleaded fuel. Keeping things in perspective, the cost for a gallon of gas is still much higher than it was this time last year - about $1.16 more.

Drivers are still paying $66 to fill up a 15-gallon tank of gasoline, which is $15 more than the highest price point reported in 2021. The state's gas prices stretch almost 50 cents, varying from $4.80 in Marquette to $4.34 in Benton Harbor. Metro Detroit's gas prices are averaging about $4.42 a gallon.

An analyst who tracks gas prices closely mentioned on Twitter the country was nearing $4 a gallon and that we could hit the mark by August 14. "We're at $4.336/gal, and about 2 days ahead of schedule to fall under $4/gal nationally."

Michigan remains a state with slightly-higher gas prices than the national average. However, Gas Buddy's assessment means that by mid-August, Michigan drives could be looking at sub-$4 gas prices.

The massive transportation method shutting down the I-94 freeway this week sits on dozens of axles and moves about 10 feet every 20 minutes. Known as a self-propelled modular transporter, the multi-tiered lift will be the only thing traveling down the highway this week as it helps install the Second Avenue bridge over I-94 in Detroit this week.

The Michigan Department of Transportation is using the SPMT to transport the skeleton of the network tied arch bridge to its final location this week. If all things go according to plan, the road between I-75 and the Lodge Freeway will reopen Friday, July 29.

The platform-hauling transit option is typically used when moving massive objects that can't be moved with trucks. Those include spacecraft, motors, cranes, oil refining equipment, and large bridge sections. 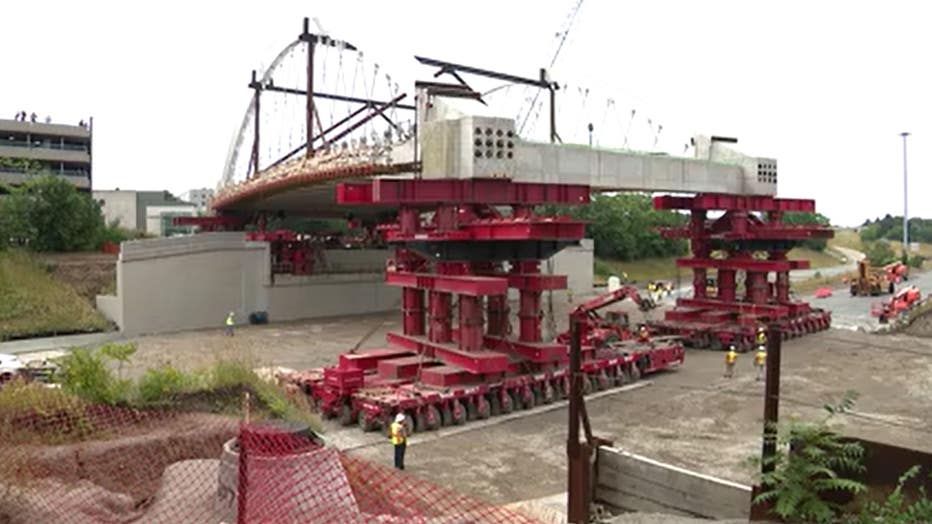 The Self-propelled modular transporter is computer controlled and specifically designed for moving large objects like bridges.

According to the Federal Highway Administration, SPMTs were recommended as the most effective and efficient mode of transportation for installing pre-built bridge systems. They're frequently used in Europe, becoming popular over the years as an alternative to infrastructure construction that improves work safety areas while minimizing traffic disruption.

A woman is dead after a fire at an apartment complex in Harrison Township. The fire broke out early Sunday morning at around 3:50 AM at the Lake St. Clair Apartments.

According to the Macomb County Sheriff's Office, a resident of the complex called 911 and stated he observed flames coming from another apartment window. Deputies arrived and began to evacuate.

Firefighters were able to enter the apartment and found a woman inside. The female, Taryn Gainey, 27, of Harrison Township, was transported to the hospital and pronounced dead on arrival, police said.

Several residents reported smoke inhalation, police said. Multiple families were also displaced due to the fire. Authorities say there appears to be no foul play, and the cause of the fire is cooking-related.

A new theatrical performance at the Detroit Music Hall tells the story of a fictional family during a very real period of time in the historical Black Bottom neighborhood. Titled Hastings Street, it explores the lives of the Carson Family in the 50s and 60s.

"We talk about it like a sore wound that has never been healed," said Gary Anderson, who directed the show. "In many ways, the story of Black Bottom is the story of how Black folks lost ground economically when the whole community was taken apart."

The score of the performance runs between Blues and Jazz. It also looks into the 1949 Housing Act which was the policy initiative behind much of the work that paved over Black Bottom and Paradise Valley in Detroit.

Using a fictional family to tell the very real story of the historical neighborhood Black Bottom in Detroit, a new show titled Hasting Street explores the lives of residents who saw their community uprooted during a period of urban revamping around the country.

Monday will be pretty uneventful after a couple of wet spots this weekend. Temperatures will also be cooler as conditions hover in the high 70s by late afternoon in Southeast Michigan. Some potential storms could hit Wednesday.

The jackpot will likely surpass this amount by the next drawing on Tuesday evening, July 26.

As players pick their numbers in 45 states plus Washington, D.C., and the U.S. Virgin Islands — and dream about their chances of winning — few actually know how they’d protect themselves if they actually won.