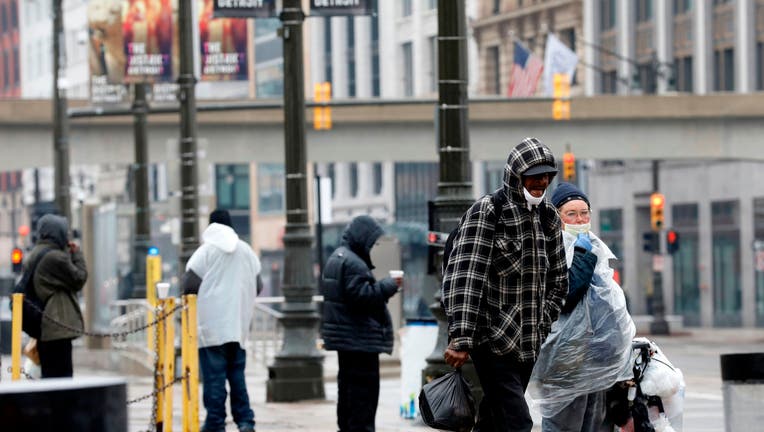 People wait for a bus as they wait on Woodward Avenue in Detroit, Michigan on April 7, 2020. - The new coronavirus isn't picky about who it infects -- so why does data emerging from some states suggest that African Americans are bearing the brunt? Ex

DETROIT (FOX 2) - In a city that regularly has one of the highest murder rates in America, Detroit's coronavirus death toll reached a grim reality this week - more people have died of COVID-19 than have died in homicides in the past two years combined.

The City reported a staggering 69 deaths on this day, Thursday, April 15, its highest per-day toll yet, though Mayor Mike Duggan did clarify at an afternoon press conference that 36 of those were caught in a backlog and were just now being counted.

Michigan has been in the top five for worst outbreaks in the country, recently eclipsed by Massachusetts. And Detroit is certainly the hardest-hit area in the state.

And demographically speaking, African Americans make up 33% of all cases in Michigan and 41% of all deaths, despite making up only 14% of the state's total population.

There's a lot of reasons Detroit's population is more at risk than other demographics. Many work in occupational roles like the service, manufacturing or transportation industry and are potentially more likely to be exposed. Households with lower incomes must make more trips to grocery stores to pick up foods because they lack the resources to buy in bulk.

There's also the issue of access to clean water. Many homes didn't have their water turned on prior to the outbreak, which may have inhibited them from washing their hands enough. Shortly following the city's first cases, Mayor Duggan said the water department would start turning resident's water back on for $25 a month.

And there's also the underlying issue of poor air quality in the city.

"So what you're seeing," the state's medical director Dr. Joneigh S. Khaldun has explained, "is when you have, really, generations of concentrated poverty and what we call those 'social determinants of health' that impact a city like Detroit, when you have pandemics like this it's going to hit those places harder."

The disparity has prompted Lt. Gov. Garlin Gilchrist to oversee a task force to investigate the reasons behind the widening gap.

Mayor Duggan was asked about the COVID-19 death rate versus the homicide rate Thursday afternoon at his press conference.

"This has been terrible. Every homicide hurts, I know the chief and I take it as a personal failure," he said. "[These deaths are] not numbers. Ten of our fellow employees we've lost and a lot of people close to me and probably a lot of people close to everybody in the city. But it you look at where we thought it was going, the day they built those thousand beds at TCF Center I thought those thousand beds were going to be filled. So did everybody else. The people of this city have saved a lot of their neighbors' lives by the social distancing they've done."

Mayor Mike Duggan addresses the fact that more Detroiters have died of COVID-19 than have died in homicides in both 2018 and 2019 combined.

The City is also now facing an incredible monetary shortfall because of the virus - $348 million to be exact - with a lot of that coming from the state-forced shutdown of its three casinos, auto plants and other businesses.

Mayor Mike Duggan explained Tuesday night that the city has saved up enough money to cover the majority of the expected deficit, but will still need to get about $44 million and will do so by taking wages from some workers.

No one's getting fully laid off, in efforts to preserve everyone's health care, but some 900 workers will soon be getting only 10% of their pay. These are employees that work with traffic and road services that aren't particularly in use right now. Wages for the 5,500 first responders and DDOT drivers and mechanics weren't cut.

Duggan warned that Detroit could be subject to a return to state oversight if action isn't taken quickly.

Meanwhile, Detroit's Chief of Police James Craig just announced Thursday, the same day the COVID-19 deaths surpassed the past two years' homicide rates, that he himself has recovered from the virus.

He was diagnosed three weeks ago and is among several hundred law enforcement members that were pushed into quarantine after exposure. He had been recovering at home and said a test came back negative for the virus on Wednesday. He joined Duggan at the afternoon press conference.

Mayor Duggan has said the curve appears to be flattening in Detroit, with the highest number of new cases per-day so far dating back to April 6, at 367. The following days were at or just below 200, but the number of new cases has increased as high as 264 in the past few days - though around a thousand tests per day are being administered in Detroit at its state fairgrounds drive-thru site, one of the most aggressive testing approaches in Michigan.

Taking a more conservative approach, Gov. Gretchen Whitmer and Dr. Khaldun were slower to acknowledge any sort of decline in new cases, though recently have admitted we appear to be at least at a plateau.

Though Gov. Whitmer, Dr. Khaldun and Mayor Duggan all agree on one thing, regardless of if we're at a plateau or past our peak - that social distancing is still a must. And they continue to urge all Detroiters and Michiganders to do so every chance they get.