THURSDAY NEWS HIT - Detroit's ex-mayor Kwame Kilpatrick may be out of jail, but his 24 convictions remain - which means whatever force he assumes in the future won't be as a member of public office. At least not for many years.

However, consultants think the former leader from the Motor City may still hold some sway in city politics, including the mayoral and city council races on the way.

"People love him here, we got social media - he doesn't even have to be physically in Detroit to be here," said political consultant Adolph Mongo.

Even during his incarceration, Kilpatrick maintained strong support among some pockets of Detroit, including several members of the Michigan legislature. After his sentence was commuted, even Detroit's current mayor said it was the right decision.

Kwame Kilpatrick is a free man, so what happens now? The ex-mayor's 24 convictions remain, but his future in Detroit is less certain.

But with the foundation being laid by several other potential candidates who want to hold office in the near-future, Kilpatrick's influence may run beyond that of an ordinary political contributor.

"It could just be speaking and reminding people that those who live here, have something that people who tend to make political contributions, don't," said PR expert Karen Dumas. "And that is the ability to vote. I think voter apathy has set in because people have forgotten that their vote can matter."

"2021 is a big summer," said Steve Hood. "You have the mayoral race and the entire City Council race. Former Mayor Kilpatrick, should he decide to engage, could play a big role."

Video and photos of the former mayor meeting with family made their way across social media. In them, Kilpatrick is sporting a big beard that's colored gray.

But he still owes restitution to the tune of $11 million - a component of clemency that wasn't also given.

"Basically what he will have to do is report an income that he will be receiving - whether it be from a business or from a job, signing autographs, whatever the source is," University of Detroit Mercy Professor Larry Dubin said. "And then the authorities will work out with him some amount of money based upon the amount of income he has coming in."

Five bowling alleys are now listed in a lawsuit against the state, working to find some way to reopen indoor dining - one of the industry's biggest money-makers.

The suit claims that if the businesses can't fully operate, then they should get some compensation from the state.

Most bowling alleys have spent the money and taken the safety measures to stay open. But until they can serve food and drinks, operating may not be worth it.

"Our bread and butter are in the winter and fall," said Scott Bennett, of the Independent Bowling and Entertainment Centers Association. "About 60 to 80 percent of our revenue is made from food and beverage."

About five businesses - most on the west side of the state - filed a lawsuit against the health department. The lawsuit does not give a specific amount in damages but it is in the seven figures.

Most of the businesses are located on Michigan's west side. The lawsuits are directed toward the health department and says the damages the plaintiffs are entitled to reach into seven figures.

Other bowling alleys not listed on the lawsuit say the system isn't perfect but would prefer to not rock the boat.

The new year ushered in a period of mourning for the Fraser family, who lost their son who was a decorated Navy veteran.

Then, after the SUV carrying his ashes and accolades from his time in the military was driven up to the family's home, a nephew went inside for a few minutes. It was enough time for the Jeep to be stolen.

"Losing him is devastation and then this is like losing him all over again," said April, the vet's sister.

Inside the veteran's Jeep Trailhawk were his ashes, medals, awards, military challenge coins, and a flag flown at the Pentagon, where he worked when it was attacked on September 11th.

The personal belongings, which included war medals, military challenge coins, the flag flown at the Pentagon on Sept. 11 were all stolen. But most importantly, the family misses the photo albums of their son and his cremated remains.

They had planned to bury him at the Great Lakes National Cemetary in Holly.

"We are hoping we at least get the ashes back so we can put my brother to rest," April said. "We don't care about the vehicle.

Michigan's daily COVID-19 case rate for seven-day averages has dipped below 2,000 for the first time in three months.

It's taken a wave of new restrictions, discouraging travel during the holiday season, and exercising the state's muscle for financial assistance to push the curve down.

In the fight against COVID-19, the state is reporting more than half a million coronavirus vaccine doses have been doled out as of Tuesday and increase of more than 200,000 doses from the previous week.

The decline in new cases could mean that several rules restricting business operations like indoor dining may be able to resume in the next few weeks.

At the same time, the state is desperately trying to increase its vaccine rate as supply lines have run dry with new doses. So far, more than a million doses have been distributed, and about half of that has been injected.

A Michigan man accused of joining the Jan. 6 riot at the U.S. Capitol has been charged with violent entry and other crimes, the FBI said Wednesday.

Karl Dresch, 40, of Calumet appeared in federal court by video, a day after his arrest in Houghton County in the Upper Peninsula.

The FBI said Dresch's social media activity on Jan. 6, especially photos, led investigators to him. He posted several messages and joked about the use of tear gas by police at the Capitol. 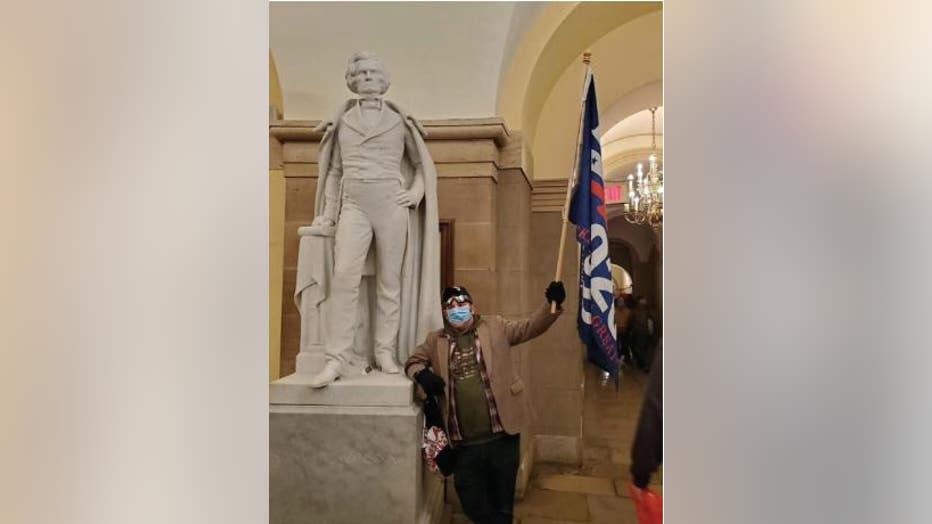 The FBI said Dresch posted a photo of himself holding a President Donald Trump flag while standing next to a statue of John C. Calhoun of South Carolina, vice president from 1825 through 1832, who defended slavery.

Days before she was killed, Re'Keyia Corbin was wearing a smile in a birthday photo with her mom and other family members. Then on Tuesday, she was shot dead in her car. Her son was wounded in both legs.

The murder happened on Downing Street near Basset with her 10-year-old son in the car. They were stopped at an intersection when a black Chrysler 300 pulled up and four men began firing at the occupants.

Re’Keyia Corbin was visiting Detroit from Ohio with her husband and son, Malik to celebrate her mother turning 70...her cousin says Corbin made the day beautiful.

"I didn’t hear the shots, but my nephew started hollering and he said that he had been shot," said Shon Jackson, Corbin’s brother.

Her son is in stable condition. But to heal other wounds will require a sense of justice.

"She was a good person all the way around, she didn’t do anything else, she was giving anything you wanted in a person, it would have been her," said Jane Graham, Corbin's cousin.

The family is using a GoFundMe to provide a larger reward for information leading to an arrest.

A woman has died and a man is in critical condition after both receiving gunshot wounds.

Detroit police are referring to the man as a suspect after they say it appears he shot the woman before attempting to take his own life.

Law enforcement crews are on scene at the moment.

1. The Detroit Lions have found their next head coach. Dan Campbell, of the New Orleans Saints, will make his first appearance to the Lions faithful in the next few days.
2. A toddler has shot his 5-year-old cousin while he was playing with a gun found in a Detroit home Wednesday morning. A police officer called the death "avoidable".
3. A lightly-attended protest in Lansing was spotted on Joe Biden's inauguration. Law enforcement in Michigan have been on alert for potential terrorism at the state capitol.
4. Police say that it was a truck that ran a red light that caused the traffic deaths of a father and daughter in Macomb Township on Tuesday.

Temperatures will close in on 40 degrees on another unseasonably warm January day. But don't expect to enjoy the heat, as the wind will keep things chilly. More snow is expected tonight as well.

We’re close to 40 this afternoon, but it won’t feel like it!

Windy conditions will persist through the day, followed by some snow showers tonight.

On his first day, Biden bets big on immigration

For the opening salvo of his presidency, few expected Joe Biden to be so far-reaching on immigration.

A raft of executive orders signed Wednesday undoes many of his predecessor's hallmark initiatives, such as halting work on a border wall with Mexico, lifting a travel ban on people from several predominantly Muslim countries and reversing plans to exclude people in the country illegally from the 2020 census.

Six of Biden's 17 orders, memorandums and proclamations deal with immigration. He ordered efforts to preserve Deferred Action for Childhood Arrivals, a program known as DACA that has shielded hundreds of thousands of people who came to the U.S. as children from deportation since it was introduced in 2012. He also extended temporary legal status to Liberians who fled civil war and the Ebola outbreak to June 2022.

The Homeland Security Department announced a 100-day moratorium on deportations "for certain noncitizens," starting Friday, after Biden revoked one of Trump's earliest executive orders making anyone in the country illegally a priority for deportations.