Another disruption to the baby formula maker's factory could cause more headaches for Abbott Nutrition, which has already experienced a major shutdown at its west Michigan plant this year.

THURSDAY NEWS HIT - The Abbott Laboratories plant in Michigan, which was at the center of the nation's baby formula crisis, has stopped production again.

Production of its EleCare specialty formula was stopped after severe storms in southwestern Michigan flooded areas of its Sturgis, Michigan plant.

This is the same plant that forced Abbott to issue a recall of some of its formulas in February due to contamination issues.

The closure of the Sturgis facility, the largest in the U.S. and source of leading brands like Similac, exacerbated the industry-wide baby formula shortage. For several months, parents and caregivers have been scrambling as shelves increasingly become more barren. Meanwhile, retailers were forced to put purchasing limits on the product to try and curtail stockpiling.

The company, which has notified the U.S. Food and Drug Administration, said the incident will likely delay the production and distribution of the infant formula for a few weeks.

"Abbott has ample existing supply of EleCare and most of its specialty and metabolic formulas to meet needs for these products until new product is available," according a statement.

"Once the plant is re-sanitized and production resumes, we will again begin EleCare production, followed by specialty and metabolic formulas. In parallel, we will work to restart Similac production at the plant as soon as possible," the statement continued.

U.S. Food and Drug Administration Commissioner Dr. Robert Califf responded to the issue on Twitter Wednesday night writing, "Today, we were made aware of the weather-related situation at Abbott’s Sturgis, Mich. facility. I personally spoke to the CEO tonight and we discussed our shared desire to get the facility up and running again as quickly as possible."

A wild chase scene out of southern Michigan led police into Detroit and eventually around the metro region after suspects stole multiple Ford Mustangs from the Flat Rock Assembly Plant Thursday morning. One person is in custody and three of the Mustangs have been recovered.

More may be missing from the plant and local police departments are still investigating the thefts, information posted by state law enforcement on Twitter said. Troopers got a call of four to five stolen Mustangs being taken from the plant in Flat Rock around 3:20 a.m.

Flat Rock Police notified the Detroit Regional Communications Center, which put out a call to other police departments. Woodhaven Police Officers first spotted the suspects at a gas station. The vehicles likely had little gas in their tanks when they were taken from the police department.

Upon seeing the officers, the suspects fled the gas station. Woodhaven police did not pursue. Instead, troopers further up northbound I-75 at Schaefer observed the stolen cars travel by them. Troopers eventually arrested one driver. Two other Mustangs have also been recovered.

The Dalman family didn't know it at the time, but their trip over the Mackinac Bridge would amount to an historic milestone for all parties involved.

The family, natives of Tawas, were on their way to Pictured Rocks for "this kids first big hike" when they were informed of the monumental occasion: they were the 200th million vehicle to pass over the bridge since its opening in 1957.

The Mackinac Bridge Authority Chairman, a board member, and staff of the authority met with the family outside the toll plaza to meet the family. Of course, the Dalmans had to pay the $4 toll booth fee first.

A milestone this big hasn't crossed the Mighty Mac since September 2009 when a Clare man drove the 150 millionth vehicle across the bridge.

See what the family had to say about the milestone here.

Man survives tanker landing on his car in I-75 crash

A fiery crash involving several big trucks and vehicles killed one person and shut down southbound I-75 for several hours Wednesday. One of the crash survivors is just 18 years old, he’s recovering at a local hospital. Daria Beavers' brother made it out of a crushed Dodge Charger alive - and her family is counting their blessings.

He survived a four-vehicle crash on southbound I-75 in southwest Detroit Wednesday afternoon. "When he sees his car, when he’s actually able to be back, he’s going to be like, 'I made it out of this. I’m 18 years old and I survived a near-death experience,'" Daria said. According to Michigan State Police, a double gravel hauler struck a pickup truck just before the Fort Street, Schaefer highway exit—killing the man inside.

It then hit a semi-tanker trailer, which fell on top of her Daria's brother's Charger. "Being here it was just nothing but tears just seeing that he made it out of this," she said, "and knowing it can be a whole different story right now." The accident shut down southbound I-75 for hours. State police say the pick-up truck caught fire after the crash.

The driver of the double gravel hauler and semi-tanker were not injured. State police say Daria’s brother suffered a shoulder injury. She says he was just a few feet from safety when the accident happened. Troopers reopened the freeway around 9 p.m., it was shut down for roughly seven hours.

Police say a parking lot fight at Stony Creek Metro Park led to a single shot being fired and three people arrested. Three suspects from Dearborn were arrested and a gun and shell casing was recovered. But now we are learning about what took place in the chaos after.

A crowded day at the beach transformed into an all-out shooting scene. Thankfully, police say no one was shot - but a couple people FOX 2 spoke with, say they got caught up in the aftermath. "I heard one shot, that's it," said Pierce Eschtruth. "I heard it was popped in the air, no one was injured or anything like that - but is scared all of us." 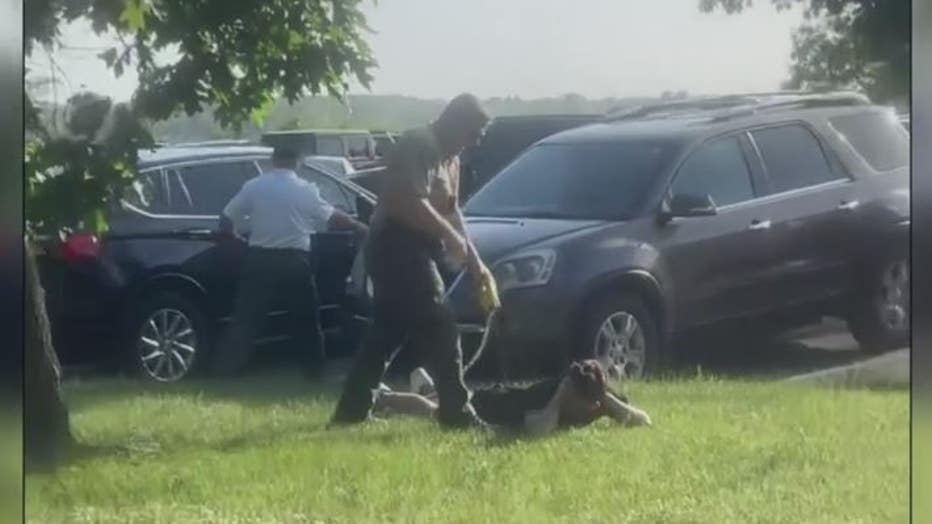 What happened next was caught on cell phone video. "I’m backing up, hands up, everything," said Eschtruth. "I just get tased, fall on the floor. And then the kid started to run and he got tased right in front of me." Eschtruth says as he was watching this, he quickly became a part of it. "Then I got maced out of nowhere," he said. "I fell to the ground, lost my phone and hat."

The man who was tased says he was handcuffed and placed in the back of a police car, leaving with a ticket. "Encroach on  shots fired scene, inciting a riot," Lulejurha said reading the ticket. Police say it is too soon in the investigation to speak about the use of a Taser and mace. But the chief of Metroparks police said they were working to secure the scene with limited information at the time.

The incoming heat won't be cooking Southeast Michigan Thursday like it did Wednesday. But temperatures will still be very hot - reaching the low 90s this afternoon. Temperatures are expected to continue descending into the weekend before they bounce back up next week.

Still hot - but not as humid for Thursday

A select House committee is trying to make a methodical case that former President Donald Trump’s lies about the 2020 presidential election led directly to his supporters' insurrection at the U.S. Capitol on Jan. 6, 2021.

The House panel investigating the attack has held the first two in a series of hearings providing its initial findings after a yearlong probe and more than 1,000 interviews. The committee has shown clips not only from the violent attack on the Capitol but also from its own closed-door interviews with Trump aides and associates who were trying to dissuade him from spreading falsehoods about an election he lost.

The hearings will continue on Thursday at 1 p.m. ET after Wednesday’s hearing was postponed.