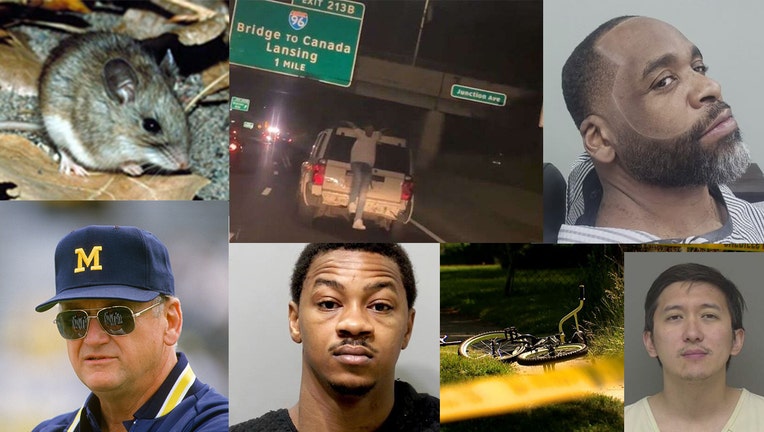 Michigan confirmed its first case of a disease that transfers from rodents to humans. A suspect shooter who targeted a boy retrieving his bike was released on bond. Detroit got its first glimpse into the current life of former mayor Kwame Kilpatrick.

Here's your weekly review of some of the biggest stories that were reported this week.

A disease that passes from rodents to humans was confirmed for the first time in Michigan this week when a woman from Washtenaw County tested positive for hantavirus.

The woman had been cleaning a vacant home in the area when she was likely exposed to the virus, the health department confirmed this week. She was hospitalized with a serious pulmonary illness. Her condition is unknown at ths time.

Also known as the Sin Nombre virus, it's commonly spread by rodents like the deer mouse or white-footed mouse. Humans can contract the disease through freshly dried contaminated droppings that are disturbed or inhaled. It enters the body through the skin but can also transmit through bites.

There is no evidence that hantavirus can be passed person-to-person. Read more on the emergence of the virus and how to protect yourself here.

Ypsilanti Township boy shot at while retrieving his bike

A 6-year-old boy was shot in the arm and threatened with a sledgehammer as he retrieved his bike from his neighbor's yard this week. While the boy is expected to be okay, the suspect who was arrested, Ryan Le-Nguyen, was charged with assault with intent to murder.

But the family and others were surprised to learn that Nguyen had been released on a $10,000 bond. "I’m trying to figure out he got a bond so low for trying to kill my kid," said the boy's father. So was the prosecutor's office, which filed an emergency motion to raise the bond after a judge set it.

A different judge eventually set a higher bond and ordered the suspect to turn himself in and wear a tether.

The county itself is in the middle of a shift in how its jails operate after the new county prosecutor promised to overhaul the cash bail system used in Washtenaw County. Read the original story here and the update here.

Suspect in shooting of 6-year-old out on bond

Coby Daniel, 6, was shot in the arm, allegedly by an angry neighbor, Ryan Le-Nguyen last weekend in Ypsilanti Township. And the shooting is recorded on video.

Kwame Kilpatrick hadn't planned on returning to the city of Detroit. He has family in Atlanta and after returning home from prison, saw little reason to come back to Detroit. But he did, and in his first media interview since his release, he told Deadline Detroit about his future plans.

They don't include politics - at least not for now. Instead, he plans to become a preacher after finding faith while locked up. "He says he fell to his knees and prayed to God, prayed to be loyal to God," read part of the interview's transcript recounting when Kilpatrick learned his sentence had been commuted.

Now, he's taking that loyalty to God and spreading the message. He plans to preach this Sunday at the Little Rock Baptist Church in Detroit. He also plans to enroll in seminary school this fall, according to Deadline Detroit.

Kilpatrick also revealed he was recently engaged, however, he didn't release too many details on who it was with. Read more on how the former mayor is spending his time out of prison here.

Video catches man hanging, swinging on back of SUV on I-94

A video posted on Instagram this week showed a man with his arms spread wide and holding onto the back of a Jeep traveling down the highway.

While the people behind the camera sounded horrified by the man's actions, he appeared rather convivial about the whole ordeal, moving his legs and playfully dancing side to side.

Michigan State Police hadn't seen the video prior to media reports about the incident. However, it's not the first video that a reckless stunt being performed on the highway. Previous posts online showed others on top of vehicles in the middle of the highway.

The SUV did not appear to have any license plate or any other identifying features. Watch the video here.

Video catches man hanging off of the back of a vehicle traveling in I-94 through Metro Detroit. Credit: Metro Detroit News

The widening scandal behind a sports doctor who allegedly molested hundreds of student-athletes at the University of Michigan grew even greater this week to include the famed former head coach Bo Schembechler.

After a report found the head coach likely knew about the misconduct, his own son and two former players gave vivid details about abuse they suffered at the hands of Dr. Robert Anderson, as well as Schembechler's decision to ignore and dismiss the warnings.

"Toughen up," he told one former player, who said he was assaulted multiple times. All three men say they have been permanently damaged and have struggled trusting doctors and maintaining intimate relationships as a result.

Other schools like Michigan State University and before them Penn State University have each been blasted with the controversy of similar reports of sexual abuse and institutional indifference. More details on the men's statements and their full story here.

On Thursday, the son of Bo Shembeckler said the longtime Michigan head coach knew about sexual assault and abuse. He said Bo's 'legendary temper came out' and he punched him in the chest.

A breakout basketball star at Michigan State University has been charged with murder and was ordered to be held in jail until his next court appearance.

Keith Appling, a member of the Spartan's Elite Eight team from earlier last decade is accused of killing his 66-year-old cousin over a gun dispute. During his arraignment on first-degree murder charges, a plea of not guilty was entered on Appling's behalf. Appling is a habitual offender and was ordered to be held without bond before his preliminary hearing on June 24.

He was first arrested on May 24 in Chelsea, two days after the shooting death of 66-year-old Clyde Edmonds in Detroit. According to the Wayne County Prosecutor, Edmonds was Appling's mother's cousin and the two men got into an argument over a gun.

His coach, Tom Izzo, says the allegations are sad. Read the details of Appling's charges here.

Keith Appling was charged with first degree murder and could spend the rest of his life behind bars accused of murdering a 66-year-old relative last month.