WEDNESDAY NEWS HIT - Police in and around Detroit were busy late Tuesday into Wednesday morning reporting to at least four different shootings through the Detroit and Wayne County area.

Detroit police exchange gunshots with suspect on west side

The first call came in from police on Lilac as they were chasing a suspect on foot on the west side. According to police, at one point, the suspect turned and fired a shot at them.

Police caught up to him, shot at him and missed, before he got away briefly. Canine units were brought in to track him and police had to use pepper spray to bring him into custody.

Want to read these news alerts first? Download the FOX 2 News app on your iPhone or Android and enable notifications.

A woman was killed early Wednesday morning when she was involved in a car crash in Dearborn Heights that also involved shooting victims from Inkster.

Michigan State Police said they were called to a shooting at a large party in Inkster where three people were shot. One person was taken by ambulance to the hospital but another car was taking two victims to the hospital.

That private car was involved in a crash with two other vehicles at Ford and Inkster roads in Dearborn Heights.

A woman was ejected in the crash and killed. It's not known if that woman was part of the shooting victims or one of the other cars involved. 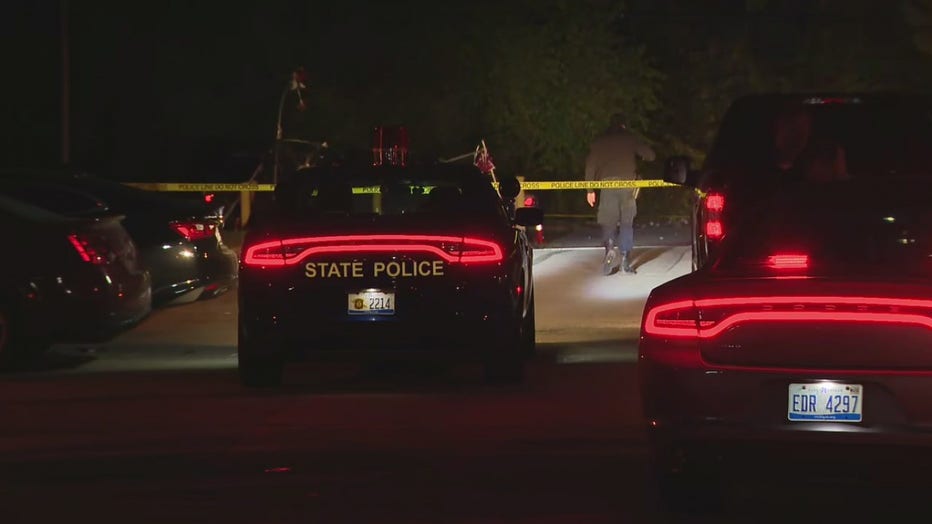 Detroit Police said a man and woman are dead after the man shot his 31-year-old girlfriend and then himself.

Police said they were called to the 14400 and said the 28-year man had shot his girlfriend and then himself. The woman was pronounced dead at the home, the man died at the hospital.

Another man was also at the home and was taken into custody on unrelated charges.

The circumstances of the shooting are still being investigated.

Detroit Police said they arrested a man for assaulting another man across the street from the Greektown Casino parking garage in Greektown.

Police said the suspect pulled a gun and assaulted the victim with it. Both ran from the area and by the time police arrived, the victim was gone and the suspect was picked upat Randolph and Gratiot.

The weapon was recovered. Police want to find the victim in the assault to make sure he is okay.

They describe him as a white man, wearing a gray hat, light blue shirt, a dark color sweater/jacket, gray pants, black and white gym shoes, and carrying a backpack. Anyone with information pertaining to this crime or knows the whereabouts of the victim, please call Detroit Police Department's Third Precinct Investigative Unit at 313-596-5340 or Crimes Stoppers at 1-800-Speak Up.

Not far from the Greektown assault, police said two men were shot after getting into an argument inside a business with a group of men.

The fight moved outside and one man shot at the victims multiple times, hitting both of them.

The suspects then left in a Merced Benz Sprinter, which was later recovered on Dexter around 2 a.m. All three suspects, two men and a woman, were arrested.

The victims were identified as two men, 26 and 34, and both were hospitalized. The younger man has critical injuries while the 34-year-old is stable.

The circumstances are still being investigated. Anyone with information pertaining to this crime is asked to please call Detroit Police Department's Third Precinct Investigative Unit at 313-596-5340 or Crimes Stoppers at 1-800-Speak Up.

Man shot in drive-by on Detroit's west side

Detroit Police said a 28-year-old man was shot while driving on Memorial Drive Tuesday night around 9:15. According to police, the victim was in the area when someone started shooting at him.

The driver was taken to the hospital and is currently in serious condition. The suspect is unknown and the circumstances are still being investigated by police.

The governor agreed to the live, interactive forum to take questions from viewers on Facebook Live. Last Friday the Michigan Supreme Court ruled against Whitmer and her emergency powers. The governor spoke about the court's decision.

"I know the actions we have taken here have saved lives, it has put us in a stronger position to reengage our economy," Whitmer said. "The past few days have not been an ideal situation where the supreme court by a party-line vote, weighed in on the emergency powers and undermined them. But we are resolute in that we will continue to keep people in our state safe."

The governor discussed the future of unemployment in Michigan and how Republican leadership can help extend those benefits.

Gov. Gretchen Whitmer took questions about the state's coronavirus response and what is being done on issues like schools and unemployment.

"These orders were to alleviate some of that pressure. We expanded who was eligible and how long they might be eligible. That fell with the supreme court's ruling. Now we have hundreds of thousands of people in our state who are worried. We need the legislature to get back into session, and to enact a law and get it on my desk as quickly as possible."

She says she is disappointed at the politicization of masks, calling it one of the most important things Michiganders can do to protect against the spread of coronavirus.

"Can you imagine if one party said that we are not going to wear seatbelts anymore ... if that became a symbol?" she said. "That would be crazy. We know seatbelts save lives. I think the politicizing of masks hurts us.

Students in Farmington Public Schools will return to in-person learning for the first time since early March after the board of education voted to have a hybrid education system with in-class and virtual learning.

In a 4-3 vote, the board voted to resume in-person learning on Monday, November 9 with an AM/PM half day schedule. The school system had previously voted to start fully remote until at least October 30.

According to the board, the half-day schedule will give consistency to instruction, reduce teacher planning load, and reduce learning support required by families.

Families who are not yet ready to return to in-person learning can continue with full remote learning.

Mark Billings told FOX 2 he was driving in the area when he saw the dogs attacking a woman. He stopped his truck, got out his tire iron, and started to beat one of the dogs.

Three people were injured and a pet beagle killed by two dogs who were running loose in the streets of Roseville, and the search continues for the owners and the animals.

But the strikes had no effect on the dogs, one weight about 60 pounds and the other about 120 pounds, as it continued to attack the woman and her puppy.

"They were actually swinging the dog, like dogs do with towels and rags," Billings said. "That's what they were doing with this dog."

The dogs eventually relented and ran away. Someone called 911 and they tried to revive the puppy but it was too late.

Despite their efforts, the dog could not be saved and Billings has a message for whoever owns the two dogs: "Step up and take responsibility for what their dogs did."