(FOX 2) - Wayne County ranks dead last in the state in both health factors and outcomes among Michigan's 83 counties.

Meanwhile, counties that border Wayne, including Washtenaw, Livingston, and Oakland all ranked near the top for both categories.

The new assessment out of the University of Wisconsin that measured both length and quality of life, as well as the community conditions that largely dictate a population's livelihood, put a stark contrast of health disparities on display.

The 2022 County Health Rankings, which were presented out of the school's Population Health Institute, hoped to reveal the ramifications that barriers to opportunity have on public health. Counties that ranked poorly in fields of health behaviors, clinical care, socio-economic factors, and the physical environment also had reduced health outcomes.

Wayne County is Michigan's most populous county, as well as one of its poorest.

According to the study, areas with poor health conditions include higher rates of tobacco, alcohol, and drug use, while diet and exercise rates are lower. Access to care, education, and good paying jobs also less available. Additionally, places with poor air and water quality, less green space, and poor housing and transit options are also considered worse health factors.

Wayne County experiences many of these trends. 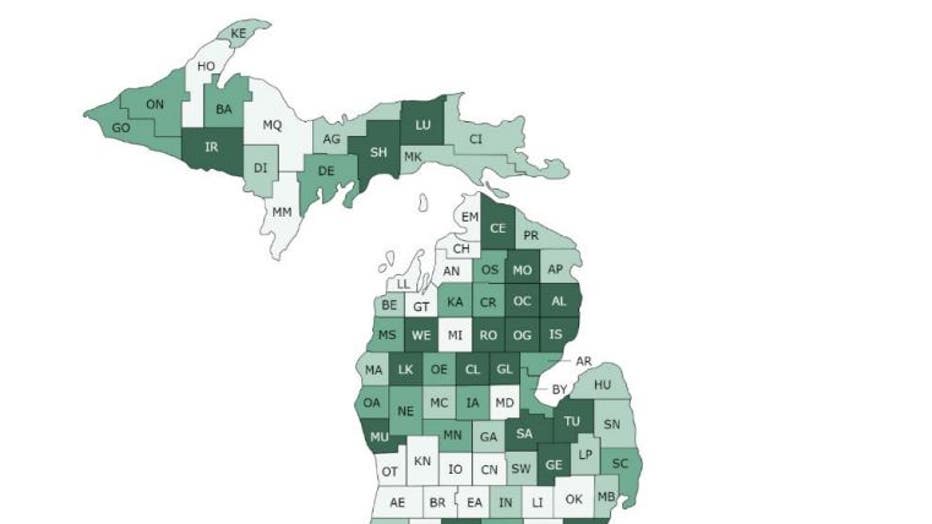 A graphic ranking health outcomes in Michigan. The stronger the color intensity, the worse the outcomes. Graphic via County Health Rankings & Roadmaps study

But residents need only go north on Woodward Avenue or hop west on I-94 to find some of the healthiest counties in the state.

Washtenaw County ranked 1st in health factors and 5th in outcomes. Oakland County ranked 3rd for factors and 6th for outcomes. Some of the highest ranking counties outside of Southeast Michigan were on the state's west side in Ottawa and Kent counties, to the north in Leelenau and Antrim.

"Achieving health equity means eliminating unjust and avoidable differences in access and opportunity," read the report. "Our progress toward health equity will be measured by how health disparities change over time."

Ideas around racial disparities as a driving source behind lower health outcomes among minority communities continued to evolve with the arrival of the COVID-19 pandemic. Black residents faced a higher likelihood of infection, severe symptoms, and death in the early phases of the health crisis.

In its final report, the Michigan Coronavirus Racial Disparities Task Force released both short and long term goals that could better protect communities of color this March.