Garden City police now say three cars were involved in a crash on Middle Belt that sent an innocent bystander to the hospital.

FRIDAY NEWS HIT - A suspected road rage incident in Garden City led to shots being fired and at least two vehicles crashing Thursday night. One driver not involved in the mayhem, but was crashed into was hospitalized, while police are interviewing the second driver as a possible suspect.

A third car was involved, police say, but the make and model have not been released yet as the investigation continues.

Garden City police received calls that two cars were driving recklessly on northbound Middle Belt near Cherry Hill. As officers responded, they got a call that shots were fired and there had been a crash at Middle Belt and Maplewood.

A black Dodge pickup truck with bullet holes visible struck a blue subcompact sedan that was an innocent bystander.

"They delivered emergency medical attention to one of the drivers," said Sgt. Bruce Shippe, Garden City police. "She was parked in a vehicle - not part of this situation."

The driver of the sedan which suffered extensive read end damage - was rushed to the hospital. Her condition is not known. 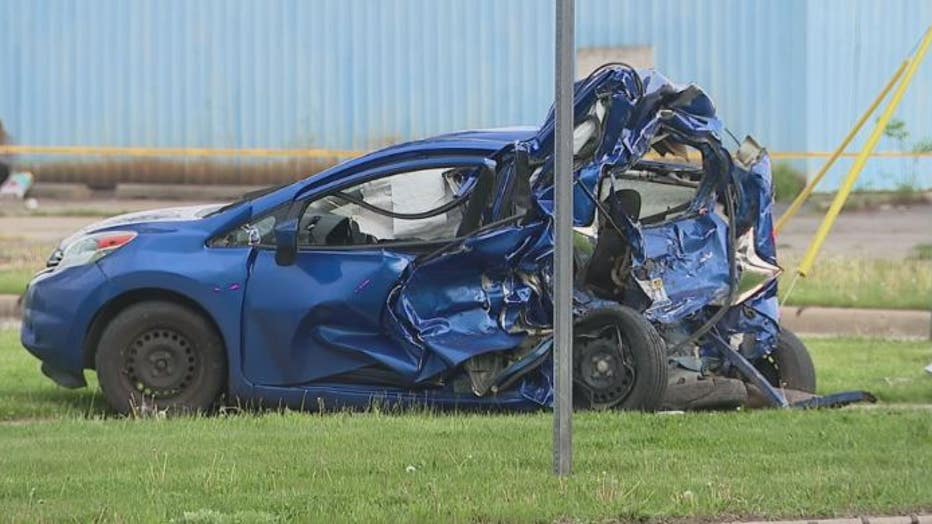 "We ran outside and literally saw this car crash," Murray said.

The driver of the truck initially fled the scene on foot, but is now being questioned by police.

"He ran fast, fell in the street, got up and continued to run, behind the blue building (nearby)," said Murray. "And then (he) returned."

Witness Randy Taylor spoke to the driver of the black Dodge Ram who claimed he was being pursued by the shooter.

Shippe says a third car was involved which remains at large but was unable to provide a description as of yet.

An innocent bystander was struck by a vehicle that was driving recklessly in Garden City Thursday evening. The truck was allegedly driving at a high rate of speed alongside another unknown vehicle when the crash occurred.

On Wednesday, FOX 2 learned about a stunning assignment at a prestigious private school that compared former President Barack Obama to primates. On Thursday, the school was closed and we learned the teacher was placed on administrative leave.

The Roeper School is facing a wave of controversy after students in a high school biology class were given an assignment titled 'an introduction to primates' and former President Barack Obama's photo was listed. The assignment asked students to select from the gallery of photos which ones were primates.

"There is no excuse," Karzanis said. "Do your due diligence! Look at the ditto, or the handout you’re passing out. Did she think that was okay in 2022 in a woke school?" FOX 2 learned the lesson originated from Duke University in 2010 and a link to the PDF was on the University’s website but disappeared Thursday afternoon after we stated asking questions.

After our story aired, the school sent a letter to parents alerting them classes would be canceled Thursday due to alleged threats to the Roeper community. The school reported the threats to police. The school issued another apology email to parents and students and offered counseling if needed. It also promised more racial bias training for teachers.

Eve Collon is no stranger to a poke from a needle. When she was a freshman, she was diagnosed with a blood disorder, and that meant lots of blood tests. "So I had a lot of blood draws and they would take different vials and I would also have infusions," she said. "So after that I would be left with a poke, and they would offer me a choice of band-aid so that was always something to look forward to."

It's not a big gesture. But it sparked a little color and joy in her life during a tough time for a teenager. Now volunteering at Beaumont, Collon has turned her appreciation for cartoon characters and bright colors that adorn some band-aids into something bigger. What was just a "little patch" became "much more symbolic."

After learning those band-aids were only handed out if they're donated, she started a campaign to collect them. It's grown fast. "I started this project last year and I was able to raise 11,000 and this year I’m a little over 16,000 and that number is still growing," she said.

On Thursday, Collon donated the band-aids to Beaumont Royal oak in hopes of bringing smiles to pediatric patients. "When I look at this I’m providing 16,000 smiles to the clinic," she said.

Family of mother of 2 mourns after fatal hit and run

After an unexpected tragic hit-and-run that left a 32-year-old mother dead, four days later family and friends got the update they had prayed for. The driver who hit and killed Iris Laciaga in southwest Detroit turned themselves into police on Thursday.

Iris Laciaga was walking to work when a pick-up truck crashed into her while she stood on the median waiting to cross the street. It happened Monday afternoon in the area of Livernois and Vernor in southwest Detroit. "It's crazy that she always told us about that street and it happened on the same street, that she would always warn us about," said Jason Colon, a family member.

Iris worked as a custodian at Harms Elementary School and was well-known and loved by many. "My nephew is co-workers with her - he says he's devastated he says he doesn’t want to work there anymore because she’s not there," Colon said. Iris’ husband and two sons set up a GoFundMe in hopes of raising enough money to give iris a proper burial.

"I don’t know how to explain - the most beautiful woman I’ve ever seen on this planet," Colon said. "I don’t know how bad things happen to good people." "(Her) husband, did not want to come out on camera, he feels like he cannot talk, he cannot say anything on camera,  because he would break down in tears," Colon said. If you would like to help the family financially, you will find the GoFundMe page HERE.

The Pine Knob Music Theatre had a lot of seats filled Thursday night - but two spots were notably empty during Oxford High School's graduation ceremony. They were for Justin Shilling and Madisyn Baldwin, two seniors that were killed following the mass shooting at the school last year.

It was one of several points of symbolism in place during the honoring ceremony and a tiny tribute to the victims that had to brave a tough year of school following the tragic act of gun violence.

"When I think of an Oxford Wildcat, I think of being resilient. Resilience is the ability to withstand and recover quickly," said Kylie Ossege, speaking from the podium. "Despite the challenges given to us this year, we took back our school."

Temperatures made a quick turnaround this week and are now trending into the high 80s Friday. It could come with some rain in the morning. More rain and slightly lower temperatures are expected over the weekend.

Hot for Friday - then a break

Baby formula vs. breast milk: Doctors explain what parents should do amid formula shortage

Many American parents are searching for infant formula amid a combination of short- and long-term problems facing U.S. formula brands, thus causing anxiety among many families and expecting mothers.

"My baby isn't even here yet, and I’m experiencing anxiety over this shortage even though I plan to nurse if possible," said Taylor Gassel, a Michigan resident who is expecting her first child in October.

Nationwide about 40% of large retail stores are out of stock, up from 31% in mid-April, according to Datasembly, a data analytics firm. More than half of U.S. states are seeing out-of-stock rates between 40% and 50%, according to the firm, which collects data from 11,000 locations.

Here's what doctors say parents should do amid the formula shortage.