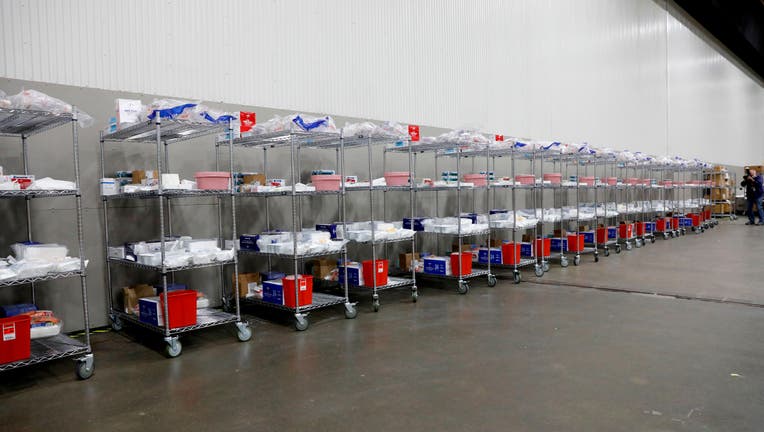 Medical supplies are seen stored in a convention hall at TCF Center as it is being converted by the US Army Corps of Engineers into a field hospital for in Detroit, Michigan on April 6, 2020. - More than 10,000 people have died of coronavirus complic

(FOX 2) - Last weekend marked the first that Michiganders didn't spend under a stay-home order since March 24.

Since the first cases of COVID-19 were confirmed in Michigan in mid-March, schools have closed, the economy has come to a halt and the state's stay-home order was extended multiple times. Thousands have protested - and thousands have also died.

Then on Sunday, health officials confirmed four new deaths linked to the virus - the lowest reported since before Michigan's stay-home order went into effect. Here's a look at the past three months and how COVID-19 has impacted Michigan.

The first cases of COVID-19 were reported in Michigan on Tuesday, March 10. One case was confirmed in Oakland County and the other was in Wayne County. The announcement came the same night as Michigan's Primary election.

And within the next two weeks, cases skyrocketed to more than 1,000 - one of the highest totals at that point in the country. This prompted Gov. Whitmer to issue the first stay-home order.

Gov. Whitmer announced the first stay-home order in Michigan to all 10 million residents on Monday, March 23, to go in effect at 12:01 a.m. the next day and last for three weeks.

Michigan joined California, New York, Louisana, Delaware, Illinois and Ohio in ordering residents to shelter-in-place, the states seeing the worst initial outbreaks in the country. At that time, around 200 deaths had been reported in the United States from the coronavirus - nine of them being Michiganders.

The stay-home order permitted residents to still visit grocery stores and pharmacies. Essential workers were also delegated and allowed to leave the house.

Through the end of March, cases were still growing exponentially in Michigan, surpassing 5,000 total confirmed cases just days later on Sunday, March 29. The number doubled again to 10,000 on April 2 and Michigan was averaging more than 1,000 new cases daily. Throughout early April, Michigan was in the top five states in the U.S. for being worst-hit by the virus.

On April 9, Gov. Whitmer announced she was extending the stay-home order that was set to expire on April 14 through April 30.

On April 10 - a month after Michigan reported its first two cases - the total number of cases reached nearly 23,000. Also in that first month, more than 1,000 Michiganders died. That's a rate of 32 people per day, or more than one person every hour.

By the end of April, as Michigan was nearing the expiration of the stay-home order, cases had risen to more than 35,000 and 2,000 more people died in just those few weeks.

Gov. Whitmer extended the stay-home order again on April 24 through May 15, though several restrictions were loosened. Landscapers, nurseries and bike repair shops were allowed to re-open. Golfing and boating were given the green light as well.

On April 30, Gov. Whitmer met resistance in wanting to extend the emergency declaration in Michigan for another 28 days. After being granted a 21-day extension in early April, Whitmer requested Michigan lawmakers extend it another 28-days, which grants her the authority to issue executive orders during times of crisis. Republicans called for a more regionalized approach to the stay-home orders, given the disproportionate number of cases reported around the state.

The construction industry was allowed to reopen on May 7, the same day Gov. Whitmer introduced her MI-Safe Start plan, which splits Michigan into eight regions and designates six phases for re-starting the economy amid the pandemic. Again, she extended the stay-home order another two weeks through May 28, right after Memorial Day weekend. 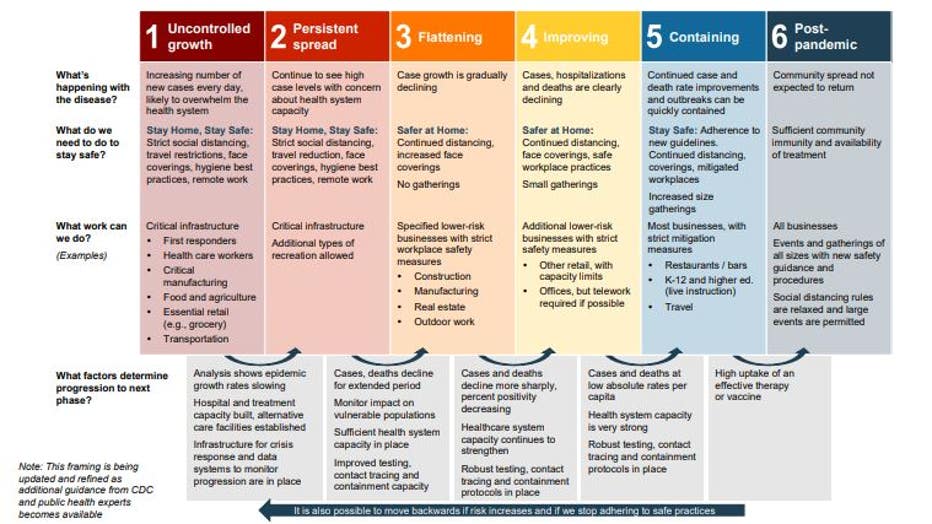 Throughout May cases and deaths still increased but at a significantly slower rate, suggesting Michigan hit its peak in early April.

On May 7, officials put the 1,000-bed temporary hospital facility at the TCF Center on pause as cases began flattening and hospitals became less overwhelmed.

By mid-May, more than 317,000 tests had been conducted in Michigan and labs surpassed processing 10,000 tests per day. Authorities estimated Michigan would have seen an additional 32,000 cases and 3,400 deaths had it not been for social distancing for the past couple of months.

On May 22 two regions in Michigan advanced to Phase 4 of the MI-Safe Start plan; the Upper Peninsula and the Traverse City Region. That means bars and restaurants there were allowed to re-open but operate in a limited capacity. Groups of 10 or less were also now allowed to gather throughout the state.

Also on May 22, the stay-home order was extended again through June 12.

On May 24, Michigan reported the lowest single-day number of deaths since March 21: five. That same week, Gov. Whitmer also expanded criteria significantly for those who can get tested.

At the end of May, Michigan stood at 57,000 cases and nearly 5,500 deaths. Retailers and auto showrooms were also given the green light to reopen to appointments only.

Beginning in June, Gov. Whitmer announced the whole state was ready to advance into Phase 4 of the MI-Safe Start plan - and the stay-home order was officially lifted.

When Gov. Whitmer made this announcement on June 1, the state's medical director Dr. Joneigh Khaldun said Michigan is seeing about 12 new cases per million people per day on average right now, and that in the past two weeks the amount of percent positive tests has dropped to only about 5%. It's because of those trends that state officials moved forward with reopening parts of the economy.

Making national headlines, Michigan has seen its fair share of crowds protesting the governor's executive power and her stay-home order through all this.

Throughout the month of April, protesters gathered both outside and inside the capitol building, many armed with guns. Images of swastikas, confederate flags and nooses were also present, something Gov. Whitmer called "disturbing" and said did not represent who we are as Michiganders.

The first protest happened on April 15, when thousands of people drove into Lansing and surrounded the Michigan Capitol Building with a traffic jam, a symbolic gesture of disagreement with Gretchen Whitmer's Stay Safe, Stay Home directive.

Protesters fill front of Capitol in Lansing for Operation Haircut

A group of conservatives gathered at the Capitol for what they called Operation Haircut to protest the Governor's Stay Home order and push for personal services businesses to be opened.

Another happened on May 20, when hundreds of people protested Gov. Whitmer's closure of non-essential businesses by getting their haircut on the front lawn of the capitol in Lansing. MSP said it was handing out $500 disorderly conduct citations to barbers or stylists who disobeyed the order of maintaining social distancing.

EDITORIAL: Lansing protest was the wrong way to make a statement amid pandemic

Whitmer and Trump spar over medical supplies during COVID-19 crisis

Gov. Whitmer and President Trump have remained at odds during the pandemic.

In March, back when the coronavirus was spreading exponentially in Michigan and our hospitals were in desperate need of ventilators and PPE, President Trump told the Sean Hannity show on FOX News that she's "not stepping up."

"I don't know if she knows what's going on, but all she does is sit there and blame the federal government. She doesn't get it done and we send her a lot." President Trump also reportedly said he has a problem with "the young, a woman governor, you know who I'm talking about, from Michigan."

The comment led to Gov. Whitmer's now-since viral tweet in which she said, "Hi, my name is Gretchen Whitmer, and that governor is me."

President Trump responded by calling her Gretchen "Half" Whitmer.

The two sparred again when President Trump suggested she "make a deal" with protesters who stormed the capitol with guns.

"The spirit of "make a deal" and the spirit of outrage that's happened from legislature about trying to negotiate sectors opening up - we're not in a political crisis where we should just negotiate and find some common ground here; we're in a public health crisis. We're in the midst of a global pandemic," Gov. Whitmer responded.

While cases and deaths have been on a steady decline in Michigan for several weeks now, COVID-19 still exists in our communities and everyone is still at risk.

In order to avoid a second wave later in the summer or in the fall, Gov. Whitmer and the state's medical director are urging all Michiganders to maintain social distancing when in crowds, still wear a face covering when out in public and frequently wash your hands.

For regions beyond the upper peninsula and Greater Traverse City Area, salons and barbershops would have the green light to open their doors Monday, June 15.

While Whitmer has indicated she'd like to match statewide restrictions in Michigan's more populated counties by America's Independence Day, time - and the data and statistics, as the governor has always said - will tell.