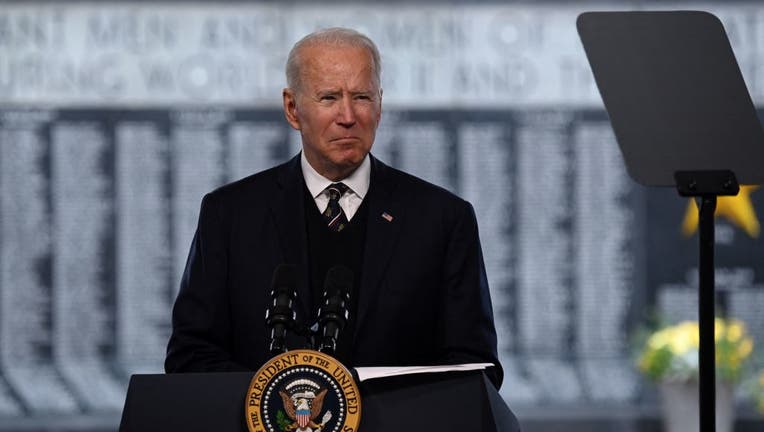 WEDNESDAY NEWS HIT - President Joe Biden will be making another trip to Michigan Wednesday to showcase the signing of his massive infrastructure package and celebrate the opening of General Motors' new Factory ZERO electric vehicle assembly plant in Detroit. FOX 2 will stream it live on fox2detroit.com and on social media.

This isn't the first time the president has visited Michigan since his tenure in the White House began. It's not even the first time his visit coincides with an electric vehicle focus. In May, he trekked to Dearborn to see Ford's Rouge Electric Vehicle Center and the new F-150 Lightning.

But Nov. 17's visit is the first after securing a major legislative win. The trillion-dollar infrastructure package addresses an array of needs, from improving roads and bridges, boosting public transit, and adapting the country to climate change.

It also comes with money earmarked for electric vehicle charging stations, of which Michigan will get $110 million. Both Ford and GM have spent much of 2021 pivoting the brands toward an electric future. They've announced new factories and models, reframing their global plans to emphasize a more electrified fleet.

But without the infrastructure to charge EVs in the same way gas stations service gas-powered cars, the electric vehicle market will struggle to reach prominence without more financial support.

Michigan has once again ascended to the top of a grim list - the highest number of COVID-19 cases in the country. It is reporting 503.8 cases per 100,000 people, beating Minnesota which is second with 490 cases, and New Mexico at 462 cases.

The state's latest COVID-19 surge started slow over the past month before surging in the last two weeks. The last time Michigan was in the pandemic spotlight was in April. "(I was) Hoping we’d be in a better situation this Thanksgiving than we were last," Dr. Adnan Munkarah, executive vice president at Henry Ford Health System said. "We are greatly concerned."

There's no one true reason the state finds itself in this situation - but doctors have pointed toward the combination of a large enough group refusing to get vaccinated, the winter conditions pushing people indoors where they are closer together, and a false consensus the pandemic is past us. Waning immunity from the two-dose shots may also be having an effect on the climbing numbers.

Once again, Michigan is leading the nation in COVID-19 cases and Henry Ford Health System said they've had to make some cuts on some procedures as Covid cases are putting the hospital at capacity.

It's starting to hamper hospital procedures, which are again seeing patients from all age groups admitted. Over the past three weeks, HFHS has reported a 60% increase in hospitalizations with COVID-19.

A community collaboration forum was held at Bloomfield Hills high school Tuesday after multiple acts of racist graffiti were found around the building last week. The idea behind the event was for students and parents to share ideas. The event, which was attended by more than 300 hundred people, started with an apology.

"Students were harmed under my watch," Principal Charlie Hollerith said. "For that I am sorry." "We are going to get a lot of good ideas out on the table," said State Sen. Rosemary Bayer (D-Bloomfield Hills). "We are going to get some good conversation going and see what we can do next."

The event - which drew about 300 people - began with an apology - and a vow for change.

Last Friday, a crowd of students gathered outside the front of the school building in a staged walkout after racially charged threats. "We want change. We want effective change," Trek Carethers, the parent of a 10th grader said. "We’ve been given assurances by the superintendent and the principal that changes will occur."

Other students who attended the meeting are hopeful this will begin to open a few minds and eyes in the district. "Hopefully this meeting will help students realize how bad it is, and saying stuff like that isn’t normal," said Lori, a student.

New ordinance expands where food trucks can go in Detroit

A new ordinance will allow Detroit residents to see food trucks in their neighborhoods. The goal of the new food truck ordinance is to provide something as simple as fresh produce to underserved neighborhoods where people have to drive a half-hour away or wait for an hour at the bus stop to get it otherwise.

Currently, in Detroit, food truck access is few and far between. You’ll find them at special events like on a college campus, downtown, or a park where the vendor has a special agreement with the city. She says a food truck ordinance will allow vendors into neighborhoods considered food deserts where it’s tough to buy quality fresh food.

"There's other neighborhoods where it is literally just a gas station or a liquor store," Lopez said. "The food products they have there, are so incredibly limited. And can you imagine coming home from work, wanting to pick up a quick bite, there’s literally nothing?" The food truck industry is one of the fastest-growing in America. From 2015 to 2020, it grew nearly 8 percent.

"There's big money in food, people have to eat," said Rushann Long, a Detroit caterer. Long supports the ordinance because it will open doors for people who can’t afford to run a brick and mortar restaurant - but need to make ends meet.

Detroit police officers and firefighters who have shown bravery and heroism will be recognized Thursday at the Above & Beyond Awards.

First responders such as Sgt. Kevin Treasvant, Officer Eric McCombs, and Officer Danny Ruiz-Cruz, who saved an unresponsive baby girl earlier this year, will be honored.

Police officers and firefighters who go above and beyond will be honored Thursday in Detroit.

"Our guys are not looking for a pat on the back but it is encouraging to see that you and the people you go out and serve with will dedicate a day toward you publicly and say thank you," Detroit Fire Commissioner Eric Jones said.

Welcome to the midweek warm-up. Wednesday will get up to 60 degrees after starting a bit above the norm at 40 this morning. Chances for rain will last all day but are expected to increase in the afternoon.

60 today with the cold coming back tomorrow and some rain in between.

Astronomers are raising the alarm on the number of satellites orbiting Earth and say if nothing is done to regulate how many get launched in the future, it could be detrimental for not just the environment on Earth, but space as well.

There are thousands of satellites currently orbiting the planet and there are a couple thousand more that are inactive and are slowly making their way back down.

Starlink, which is part of SpaceX, has the most in orbit, according to Science.org. The company has launched more than 1,700 satellites so far and it plans to send tens of thousands more into space in the future.

On top of the satellites mucking up the night sky for astronomers, millions of tiny pieces of reflective debris from various collisions are making looking for important celestial bodies even harder.

"For the most part, I think almost all observatories around the world will be affected to some degree. Some less than others," said Connie Walker, a scientist for the NSF’s National Optical-Infrared Astronomy Research Laboratory.