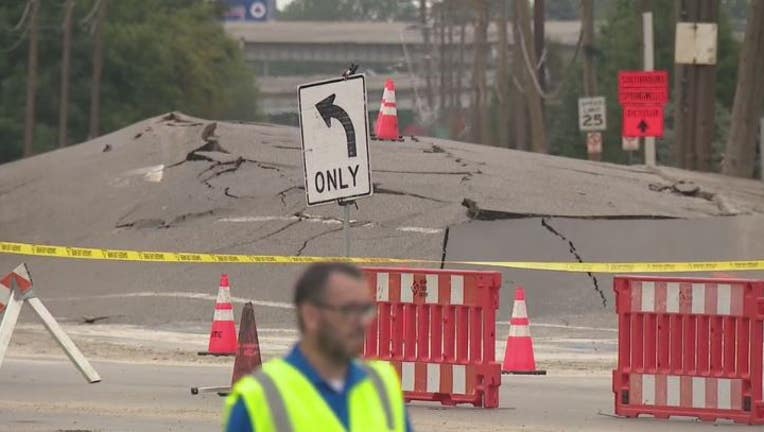 FRIDAY NEWS HIT - Community activists are calling on Detroit officials to enact an evacuation of residents near and around the area impacted by an underground disturbance.

It's unclear what caused the damage underground on the city's southwest side, but it left a major road at the intersection of Fort and Dearborn streets cracked and elevated up to eight feet and a provisioning center damaged, forcing it to be razed.

Officials claim there is no evidence of an explosion but have offered no clue yet as to what caused the dramatic landscape disruption which workers at the provisioning center said sounded like an earthquake. The initial damage to the building was Saturday night, which caused a brick wall on one side of the business to collapse. But by Sunday, the carnage got even worse when Dearborn Street began rising several feet in the air as it split in half.

The Southwest Detroit Community Benefits Coalition is requesting an evacuation due to uncertain safety and changing conditions at the site.

Pastor Kevin Casillas said in a statement that the safest alternative would be to remove residents from around the area.

"The site is unstable, the cause is not known, and the direction it is taking is unpredictable, and all of this is occurring in an area where we understand there are high-pressure gas lines," said Casillas with the coalition. "An abundance of caution must continue to be taken to protect people. If we can’t assure people of their safety, we must let them know and provide them safe options.

"Thankfully, DTE has cut the gas from a mainline to the area. In this yet unknown situation, we cannot subject families to further stress and fear for their safety."

Casillas also shared concerns for the neighborhood's wastewater facility which was paused due to the incident.

"We are also concerned about a heavy backup of human waste at the wastewater facility in the neighborhood due to the utility stoppage affecting the wastewater plant operations. The stench can be unbearable and if there are heavy rains, what else are people going to have to endure?"

The area is known to get special consideration due to the underground infrastructure, the coalition said. Due to the high-pressure utilities underground, street trees could not be planted on Dearborn Street this summer while in contrast, "several tons of iron ore is piled high at a scrap yard facility at the epicenter," the release said.

Officials said there was no explosion but the ground swelled, leading to the damage. Experts said they have never seen anything like what happened, before.

It was a debate that never got off the ground after Detroit Mayor Mike Duggan refused to debate his challenger in the upcoming mayoral race. Scheduled for Thursday, Anthony Adams chastised Duggan and said the debate is for the people. "The people need to hear two candidates stand toe-to-toe and debate their issues."

Duggan's campaign manager Alexis Wiley said they weren't "going to give a platform for a rhetoric of divisiveness and hate and that's something the mayor is not going to do." Adams fired back, arguing "When you talk about hate speech, I do hate what’s going on in the city of Detroit, I hate the fact that the citizens are overtaxed to the tune of $600 million."

The race wasn't particularly close in the primary campaign, despite the tension surrounding the politics. Duggan won more than 70% of the vote in the August primary while Adams, the second top vote-getter got just shy of 10%.

It was a debate that never got off the ground. Detroit Mayor Mike Duggan refused to go head-to-head with challenger Anthony Adams Thursday.

Adams criticized the use of dark money by Duggan's campaign. Wiley responded by saying it was ironic since Adams had also utilized anonymous donation sources. "The clerk requested that he correct and identify those," she said, "that's not been done."

Every two seconds someone in the US needs a blood transfusion. The Red Cross said Thursday that demand is outpacing donations by about 10 percent. Some hospitals are even weighing in some cases whether to reschedule elective surgeries. "It’s the worst I’ve seen in my career as a transfusion medicine specialist,"  said Dr. Craig Fletcher, Beaumont Health.

The reason? A decrease in blood supply and a spike in need was pinching hospitals around the country and in MIchigan. He said the hospital is having to make tough calls as a result about where blood should go.

Some hospitals are even weighing in some cases whether to reschedule elective surgeries - it’s a discussion that’s being had around Metro Detroit.

"We have had chances where we’ve had to delay certain types of cases," he said. "Particularly right now, Type O blood is very low. We review the surgical schedule on a daily basis to look at patients with Type O blood are scheduled for surgery and then potentially canceling or delaying those cases - as you mentioned - particularly elective cases."

There's typically a summer lull in available blood donations. But this year is worse as the need has increased amid more surgeries that were put off last year. Additionally, blood drives that usually get set up at businesses and schools were passed last year due to the pandemic.

An archaeologist digging in west Michigan came across artifacts that he says unravel a completely unknown narrative about early civilizations in Michigan and the country. "We thought previously that people moved into Michigan from the lower 48 after Clovis times," said Brendan Nash, an archaeology candidate at the University of Michigan.

New archaeology discoveries are changing what know about our Michigan ancestors

University of Michigan's Archaeology Department uncovered the excavation site, called the Belson Site. what they find are key artifacts that imply that people were in Michigan way before we previously thought.

About 13,000 years ago, it was glaciers that covered Michigan, not large civilizations. Or so experts assumed. But in 2008, the tip of a spear was found, which changed the understanding of early people living in Michigan.

Since then excavations have been led near St. Joseph County where a 10-by-10 meter site has been dug, called the Belson Site. They have since uncovered key artifacts that imply people were in Michigan way before previously thought. "We've been finding broken spear points, we've been finding scrapers, gravers, all the things you would need to survive out in the wilderness on your own," Nash said.

"What this means for Michigan, is that we have a history that is as long as everybody else's history," Nash said. "And that we might even have a unique process of proliferation of people early on in Michigan." 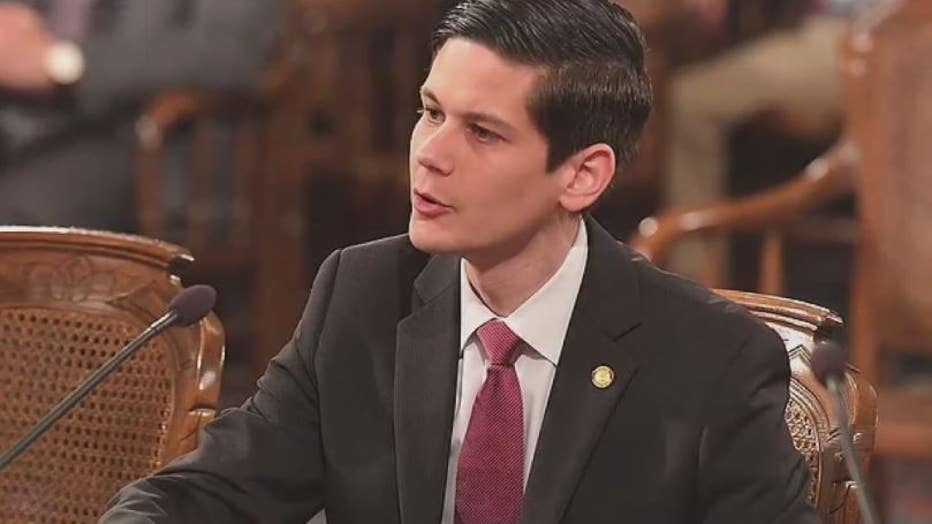 Rep. Mari Manoogian (D-Birmingham) made the allegations in a statement. Marino was removed from his committee assignments Wednesday.

"I had a relationship that ended well over a year ago with Representative Amara Manoogian. She served on a committee that I chaired. I regret the fact that I went along with her request to not disclose the prior relationship to the Speaker," Marino's statement read. "However, I will be clear: the insinuations made are nothing more than politically motivated character assassination that I am confident will conclude as a waste of the public's time. I look forward to fulfilling my duties and maintaining the trust I've worked so hard to build during my seven years in public office."

A spokeswoman for Michigan State Police said they are looking into a complaint filed against Marino which they received late Tuesday, but would not provide further details.

Temperatures will peak in the 80s Friday as humidity returns for a bit before a cold front moves in. Some rain is expected overnight and should be done by Saturday morning.

In another ominous sign about the spread of the delta variant, Idaho public health leaders on Thursday expanded health care rationing statewide and individual hospital systems in Alaska and Montana have enacted similar crisis standards amid a spike in the number of unvaccinated COVID-19 patients requiring hospitalization.

The decisions marked an escalation of the pandemic in several Western states struggling to convince skeptical people to get vaccinated.

The Idaho Department of Health and Welfare made the announcement after St. Luke's Health System, Idaho's largest hospital network, asked state health leaders to allow "crisis standards of care" because the increase in COVID-19 patients has exhausted the state's medical resources.