A Mt. Clemens man is in custody after allegedly shooting at Macomb County Sheriff's deputies numerous times while barricaded in his condo. Deputies were called to the home over a neighbor dispute.

TUESDAY NEWS HIT - A Mt. Clemens man brandished a gun when his neighbor tried to talk to him about his dog, leading to an hours-long standoff Monday, authorities said.

The Macomb County Sheriff's Office responded to a home on Clinton Street, near Gratiot Avenue and Market Street, around 11:55 a.m. on reports of a man with a gun. Deputies said when a neighbor attempted to speak with the man, he brandished a gun and threatened to shoot her. The victim provided the man's name and description when she called 911.

Sheriff Anthony Wickersham said the man was known to authorities, and deputies had been called to the home in the past.

When deputies got to the scene, they saw the 64-year-old man enter a condominium. He then came outside and fired at deputies before going back inside, authorities said.

"There is always that unknown risk when you are going to a call of what’s going to happen? A simple barking dog complaint or neighbor complaint can turn into a shots fired type call, which happened in this situation," Wickersham said.

Deputies closed the road and set up a perimeter.

He came out again around 12:35 p.m. and fired at deputies with a rifle, authorities said. No one was hit, but a bullet struck an unoccupied patrol car. A deputy returned fire and believed he hit the man, who went back inside.

That deputy was removed from the scene and was not injured. They have been placed on administrative leave.

"Everybody's on a heighten alert because he didn’t have a problem shooting at the police two times, so he could do it again," Wickersham said.

The Crisis Negotiator Team and SWAT team attempted to communicate with the man, who told them via phone that he had been hit. Negotiators tried to persuade the man to come out for medical treatment.

Authorities negotiating with barricaded gunman who shot at deputies

Authorities are in Mt. Clemens negotiating with a barricaded gunman who they say shot at deputies twice. Macomb County Sheriff's deputies were at the man's home after he allegedly fired a gun during a dispute with a neighbor.

According to deputies, he said he would come out. However, he broke a window, went out on the balcony, and started shooting at deputies again.

Deputies were able to get six residents out of other units as they tried to get the man to come out. Once the other residents were out of the building, the Unmanned Aerial Vehicle Unit entered with drones, and the SWAT team used a tactical robot.

The man was on a couch, authorities said, so SWAT team members went inside and took him into custody just before 7 p.m.

Wickersham said the man had what appeared to be a gunshot wound on his right arm, so he is getting treatment at a hospital. His dog was located in his vehicle parked outside the home. The dog was turned over to Macomb County Animal Control for care.

Get the latest on the story here.

A groundbreaking new technology is now installed at the Detroit Airport, offering an innovative way to see real-time flight and gate information for flyers passing through the Delta terminal.

Dubbed Parallel Reality, the tech allows up to 100 travelers to view personalized flight information of their trip at the same time. The information available includes the gate and flight number, the destination city, and the departing time. It even shows the direction travelers should go to reach their gate.

The Vice President of Innovation at Misapplied Sciences, the firm behind the new screen said the adopted technology was "incredibly human-centric."  "We’re not chasing shiny objects; we’re looking for ways to make our customers’ lives easier. With PARALLEL REALITY, we saw an opportunity to personalize and simplify what can be a confusing experience – navigating the airport," said Matt Muta.

How it works is when a Delta traveler approaches their screen, they can share their ticket information with the screen. From there, the screen locates the flyer and displays information that only you can see from where you're standing.

The Lansing Fourth of July parade ended Monday after pro-abortion rights protestors started walking the parade route. Protestors were gathered at the Capitol. As the parade started, they moved to the streets and some blocked the parade route.

"We saw a couple different, four different people or groups go through, then the protestors started, and it took several minutes for them to go through, and after that, that was it. The parade was done," said Jill Higgins, who attended the parade. "It was really a disappointment for us today to come all the way up from Jackson and not have the chance to enjoy the parade with our grandchildren." 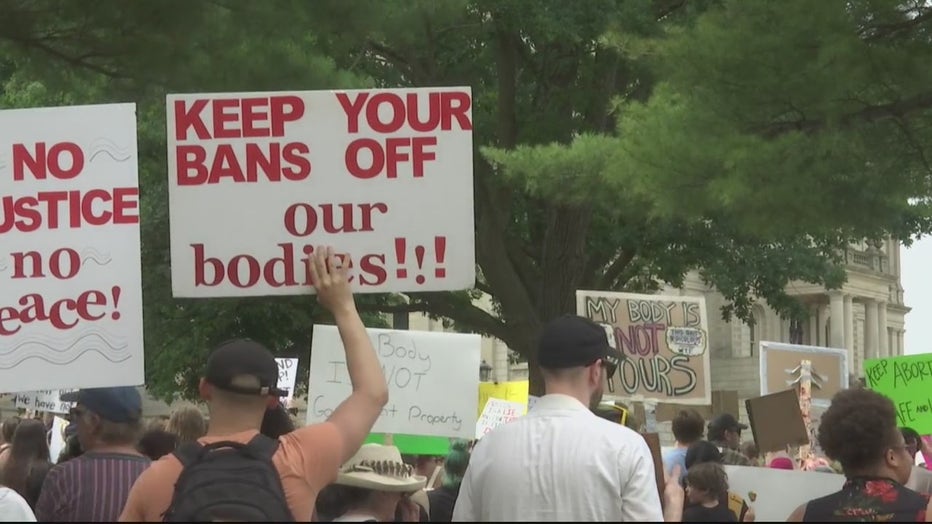 City officials said they were disappointed, but that the decision was made to cancel due to safety.

Numerous protests have been held around the country after the Supreme Court's decision to overturn Roe v. Wade.

Michigan gas prices continue to fall from their record-high reported in mid-June, landing at a state average of $4.94 a gallon this week. The prices are still 8 cents higher than they were last month, but 11 cents less than they were last week in Metro Detroit. Currently, the average cost for gas in Southeast Michigan is $5.04 a gallon.

Gas prices are starting to come down in Michigan and drivers are taking note. It's a relief for those that commute a long way - but drivers maintain that prices are still too high to be sustainable.

Gasoline demand has fallen two weeks in a row, the Energy Information Administration announced Tuesday, reporting both a decline of hundreds of thousands of barrels of oil, and a big increase in supply.

These two factors are leading to decreasing oil prices at the gas pump, something that Michigan residents haven't seen in months. The most expensive gas is in Ann Arbor at $5.07 a gallon. In Marquette, it's $5.03 a gallon. The cheapest gas in the state can be found in Benton Harbor - at around $4.80.

The decline in gas prices isn't a total surprise. An analyst at Gas Buddy that tracks prices said that costs would begin falling by the Fourth of July holiday. Patrick De Haan said the national average could fall as far as $4.75-$4.85 a gallon. Currently, the national average is $4.81. It's unclear how much further relief at the pump will follow.

Witnesses of a fatal shooting early Monday in Fraser heard someone yell that he was going to shoot people running. The two men, who do not want to be identified, were in the area of Joy and Franklin around 3:15 a.m.

The men said they ducked and ran for cover when they heard that. "When we came back outside there were cops everywhere," one of the men said.

Two witnesses were outside when someone started threatening to shoot two people before killing a man in Fraser.

Police said they found a man who had been shot several times. He was taken to McLaren Macomb Hospital, where he later died. Police have not identified the victim as they work to contact his family. Investigators are now trying to identify a person of interest.

The rain will be the main feature of the morning Tuesday, but don't plan on it sticking around forever. The heat will ramp up as the sun comes out, while the humidity will push the heat index to 96 degrees in Metro Detroit.

Highland Park 4th of July shooting person of interest: Who is Robert Crimo?

A gunman on a rooftop opened fire on an Independence Day parade in suburban Chicago on Monday, killing at least six people, wounding at least 30 and sending hundreds of marchers, parents with strollers and children on bicycles fleeing in terror, police said.

Highland Park Police Chief Lou Jogmen said a police officer pulled over 22-year-old Robert E. Crimo III about five miles north of the shooting scene, several hours after police released the man's photo and an image of his silver Honda Fit, and warned the public that he was likely armed and dangerous.

Police declined to immediately identify Crimo as a suspect but said identifying him as a person of interest, sharing his name and other information publicly was a serious step.

So who is Crimo?