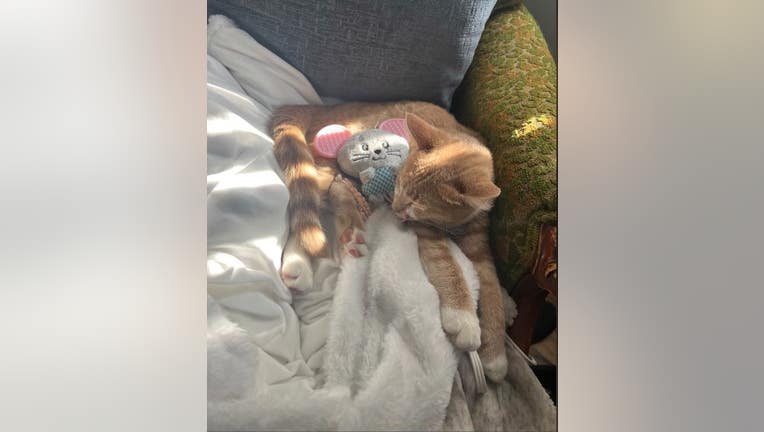 On August 30, the Stamper family had a power outage from a summer storm and connected a portable generator to help run their appliances. The garage door accidentally got closed while the generator was running, exposing the family to carbon monoxide gas, according to a release from the fire department.

Thor woke the family's mother, Heidi Stamper, with a screeching cry and was visibly sick. She took the cat outside, saw that his condition improved, but then brought him back inside and soon lost consciousness herself.

The kitten resumed his screeching and alerted the kids, 13-year-old Paige and 11-year-old Quinn, who then were able to get their semi-conscious parents out of the house.

The Farmington Hills Fire Department arrived and transported the family to Beaumont Farmington Hills. Heidi and the children were flown to Promedica Hospital in Toledo for specialized care for carbon monoxide poisoning,

"This is a frightening example of how carbon monoxide can accumulate quickly and potentially be fatal," said Farmington Hill Fire Chief Jon Unruh in a release. "Fortunately, this incident had a positive ending, but we hope all families will learn from the Stampers and keep their generators outside."

Family friends have established a GoFundMe site to help the Stampers with medical expenses, go HERE to learn more or donate.

The Stampers’ home did not have any carbon monoxide detectors, the fire department said. They have now installed several CO alarms, as have all their neighbors. If any residents need help with purchasing or installing a carbon monoxide alarm, they may contact the Farmington Hills Fire Department at 248-871-2800.

The Stampers now want others to learn from their difficult experience. They are helping the Fire Department spread the word that portable generators should only be operated outside and must be placed far away and downwind from windows, doors, and vents.

"The Fire Department reminds everyone that generators should NEVER be used inside homes, garages, basements, sheds, or any other enclosed or partially enclosed spaces," Unruh said. "In this case, using a portable generator in an enclosed garage almost had deadly consequences." Carbon monoxide is tasteless, colorless, odorless, and impossible for human senses to detect. It builds up quickly and lingers for hours, even after generators are turned off.

Demolition on Detroit's decrepit Packard Plant will begin Thursday after the city gained permission to raze the blighted property earlier this year. The City Council approved $1.68 million in funding over the summer to help finance the demolition of the 3.5 million square foot plant, after a judge ordered the property's developer to immediately tear down the building.

Fernando Palazuelo has owned the old Packard Plant for years and had previously released a $350 million plan to revitalize the structure for mixed-use development. But the plans never moved forward.

After Palazuelo failed to meet court deadlines over the property, a judge ordered the plant be demolished and for the Peruvian developer to pay for it. Detroit has been pushing to remove the property over concerns it presents an imminent danger to an adjacent business and its employees.

The city is expected to be at 6199 Concord Thursday to oversee the beginning of the demolition.

A new Chick-fil-A restaurant is opening in Metro Detroit Thursday, bringing another restaurant from the popular chain to the region.

The latest one will open on Telegraph Road in Southfield, and will operate from 6:30 a.m. to 9 p.m. Monday through Saturday for both dine-in and drive-thru. There will also be mobile carry-out options as well.

Its owner, Matthew Leverett, is a Southfield native, a release about the store's opening said. Along with its opening is a debut of a new milkshake: the Autumn Spice Milkshake. The Grilled Spicy Deluxe Sandwich is also making a return.

The newest spot is located at 28550 Telegraph Road. Two more Chik-Fil-As are expected to open later this year, with locations in Livonia and Monroe expected.

Stellantis will likely cough up a quarter million dollars in a settlement for air quality violations at its expanded Jeep plant on the city’s east side. It includes $212,000 to be spent on improvements to Southeastern High School and planting trees as well as a $62,000 fine paid to EGLE — the state’s enviromental regulatory agency

"I think it’s an insult. They make that every two or three minutes off of those vehicles rolling down that line," said Robert Shobe. "So I mean, to fine me $62,000 for 13 months of polluting a community to me is like, that’s the price of doing business - ‘Can I open up another one down the street?’"

"The pollution doesn’t stop at this block," said Darnell Gardner. "The pollution goes in that direction, it goes into the communities over here." Gardner did say the settlement was a step in the right direction.

Stellantis fined $62,000 by state for air quality violations on Detroit's east side

Robert Shobe, whose home backs up to the Mack Assembly Plant, calls the settlement a slap on the wrist.

Stellantis’ initially faced a fine of $270,000, but agreed to plant and maintain more than 80 trees at Brewer Park and purchase and install a new building management system for Southeastern High School.

Michigan State Police are wishing everyone a good Thursday morning. They're also wishing for drivers to obey the rules of the road as they'll be paying extra attention to traffic on I-696 in Metro Detroit on Sept. 29.

A tweet posted from the state police's second district said officers would be between Dequindre and Halstead looking for distracted drivers and other bad driving behavior.

The law enforcement zone stretches from Farmington Hills to Warren along I-696.

It's not the first time Michigan State Police have announced coordinated enforcement on the highways.

Temperatures are going to be warming up slightly over these next few days and we'll get to 63 degrees by midday. Plan on clouds in the morning and sun in the afternoon.

Have you ever experienced meeting someone who is unaware of either a popular song or food dish? Their ignorance is palpable. It’s a feeling that leaves those in the know both infuriated and jealous at the same time.

The internet is experiencing that right now, after excerpts from a local New York City news article went viral in which the reporter, who writes about the opening of a new Panda Express location, makes it seem through their writing, that they’ve never actually heard of Panda Express before.

The article was so baffling to one Twitter user, Alex Lasker who tweeted snippets of the piece on Twitter writing the caption "absolutely losing my mind at this article about the new east village Panda Express written by someone who has never heard of Panda Express in their life."