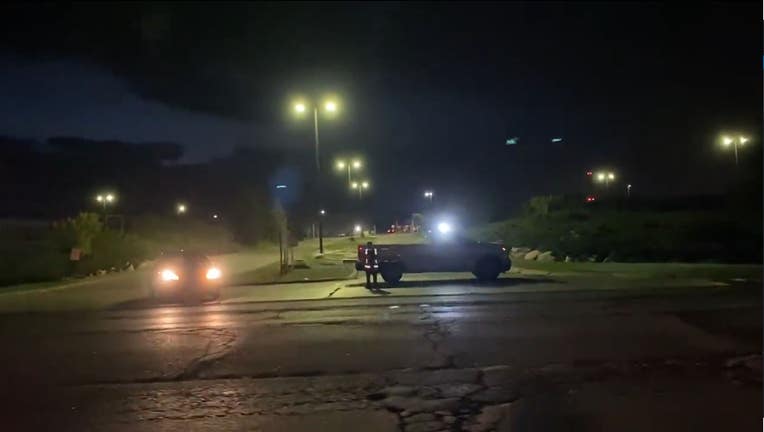 A truck blocking access to the Lake Orion assembly plant.

THURSDAY NEWS HIT - A General Motors manufacturing plant in Lake Orion was shutdown and employees ordered to go home Thursday morning after a fight between employees inside led to a fatality.

Employees arriving at the assembly plant for the 6 a.m. shift were being turned away without explanation.

One suspect was taken into custody.

The Oakland County Sheriff said on Twitter that an altercation between coworkers "resulted in the death of one victim and we have the suspect in custody."

Law enforcement were telling employees driving to the plant to call their boss and see where they should report - but that no one was being admitted into the plant.

In a statement, GM said it was "working with the Oakland County Sheriff’s Department to investigate an incident at the Orion Assembly Plant in Lake Orion, Michigan. In the meantime, GM has canceled Aug. 11 production at Orion Assembly. Additional details on the incident will be released by the Oakland County Sheriff’s Department.

Get the latest on the story here.

Two suspects are missing after a hit-and-run in Redford Township left a 6-year-old boy with severe injuries Wednesday night. A police investigation has been launched into the incident after responding around 8:45 p.m.

Two suspects fled the scene of a hit-and-run after striking a 6-year-old boy in Redford Township late Wednesday night.

Chase Young had stopped by his grandmother's house to have some Kool-Aid before leaving for a friend's house. He was hit a short time later and was dragged. The vehicle that struck Young was stolen, police said.

"This is getting out of hand. They fly up and down this street on the daily," said Carrie Young, Chase's grandmother. "Everyday, on these streets they fly like it's not even a residential street. Then if you say something to somebody, then they want to pull guns or whatever. This don't make no sense because we lose babies every day."

The hit-and-run happened near Brady and Vassar, which isn't far from Seven Mile and Grand River.

General Motors is bumping up the sticker price on many of its new vehicles adding a mandatory OnStar subscription, whether you want it or not. This equipment is on new Buicks, Cadillacs, and GMC vehicles. And on Wednesday GM said you have to take it for $1,500.

"It's just like buying a car with seats and a steering wheel, you have to take this equipment," said John McElroy, auto analyst WWJ 950. "They're listing it as an option. And people are going 'I don't want to buy it.' Too bad."

OnStar can work for navigation and tracking a car if its stolen. It can also give someone a health checkup on their car. The $1,500 will be tacked onto the purchase price of the car, which gives the driver three years of access. After that, it requires a monthly fee or the device is dropped.

This equipment is on new Buicks, Cadillacs, and GMC vehicles. And on Wednesday GM said you have to take it for $1,500.

McElroy says GM is doing this because, at some point, car sales are going to stop growing. So how does a car company continue to grow its top line? Sell services. "In fact, GM thinks that people will pay $135 a month above their car payment get all the services," he said. "And that turns out to be $10 billion a year."

Oakland County leaders voted to put a public transit millage on the ballot - but the potential price tag if approved in November isn't setting too well with some residents. On Wednesday night in a 13 to 7 vote, Oakland County commissioners moved to put the issue on the ballot in the general election.

"Sixty-six million dollars in the first year - are you people out of your collective minds?" said one resident. That is how much money a new public transportation millage in Oakland County would generate - if it’s approved by voters in November.

But others feel the .95 mill measure is necessary, saying public transportation is ultimately something that affects everyone. "No matter where we stand on transit we all need it as a community," said another resident. "As we go along in our daily activities, we all depend on those who depend on transit."

Sterling Heights is the fourth-largest city in Michigan - and although marijuana is legal in the state, there are no places to buy it there. Yet. On Wednesday residents sounded off on whether the city would allow marijuana dispensaries to open for business. Many said no way.

"I think I can proudly say my kids have not been involved in drugs, but now you want to sell marijuana in the community when Sterling Heights is a family-oriented city," said resident Heidi Allen. "We’d like to keep it that way."

Officials say such facilities are not allowed per city ordinance now. The question is whether the people would be open to changing that. The public forum saw feelings split down the middle.

"This is not going away," said another resident at the meeting. "This is mainstream. This can provide good paying jobs for citizens in Sterling Heights and surrounding communities, and we seriously need to consider this."

Read more on the disagreement between residents here.

A perfect stretch of weather is going to keep Southeast Michigan conditions pleasant through the rest of the week. A cold front is keeping temperatures in the high 70s and low 80s and more is expected by next week.

Melting ice is likely causing Earth to spin faster; Here’s why that’s a problem for timekeepers

Our planet has been slowing down ever since it formed. A day on Earth was about 21 hours long about 440 million years ago. When the dinosaurs stomped around, it was about 23 hours long, fossils and astronomical records show. And now of course, Earth's rotation brings us to the 24-hour day we're living in-- that is, until recently when the rotation started to pick up speed.

On June 29, Earth's rotation was measured at 1.59 milliseconds faster than usual, earning international headlines about the "fastest" day on Earth. But Earth's rotation is far from constant, explains Dennis McCarthy, the retired Director of Time at the U.S. Naval Observatory.

This long list includes atmospheric changes, tidal changes from the moon, sea surface changes during El Niño and crustal motion within the interior of the Earth.