TUESDAY NEWS HIT - Monday was a bad day for Michigan in the COVID-19 world. Now, eight months since the state's first confirmed case, more than 9,000 more tests came back positive in just one weekend, representing the most ever reported from Saturday and Sunday.

With COVID-19 spiraling upwards at a pace that looks more like an unmitigated spread than a contained outbreak, Michigan's second surge of new cases represents its fastest growth since the virus first arrived here.

And typically what follows next are more grim statistics, evidence of which is already starting to show.

Along with the thousands of new cases, Michigan is also identifying a quickly-growing increase in deaths. At the end of October, deaths were still being reported in the single digits with the state adding more in the "after review" section. The most deaths reported the day of was 35, back on Oct. 24. Prior to that, death rates hadn't come close to their totals last reported in June.

While arguments about increased testing and more opportunity for transmission among young people can speak to the increasing positivity rate among Michigan residents, it's the death and hospitalization rates that showcase the end result of lax policy and public fatigue in mitigating COVID-19.

In a reversal of policy not seen since the early days of the outbreak, Beaumont Hospitals is reinstating visitor restrictions at three of its buildings in Royal Oak, Troy, and Grosse Pointe.

“We’ve had a notable rise in COVID-19 cases in metro Detroit,” said Dr. Nick Gilpin, medical director of Infection Prevention and Epidemiology for Beaumont Health. “Community positivity rates have jumped to 8-11% in the area. Last spring, we took care of the most COVID-19 patients in the state and we know that taking difficult steps like restricting visitors will help us keep our patients and our staff safe.”

Last spring was also when PPE supplies ran thin and ventilator capacity reached its ceiling. With hospitalizations rising again, and in less resource-abundant areas like the upper peninsula, health officials worry a similar outcome could be on the horizon.

"I've been racking my brain, trying to figure out if there was a time where I let my guard down for just an instance. And while I haven't identified any area of exposure, what I have determined is that this shows the power of the virus," he wrote in a statement posted to Twitter.

A child is in critical condition after getting stuck by gunfire late Monday night.

Detroit police have arrested the child's mom who allegedly fired the weapon amid a dispute with a neighbor over a food delivery order.

The violence started around 8 p.m. Monday night when the woman got in an argument with her neighbor in the 4200 block of Tyler Street, south of W. Davison and east of Livernois.

Mother in custody after shooting child amid food delivery mixup

Detroit police are investigating a shooting in the 4200 block of Tyler Street where a child was injured by gunfire after her mom got in a dispute with a neighbor over a food delivery. When the neighbor pulled out a hammer, the mother pulled out a gun and shot. One of the bullets hit her daughter, who is now in critical condition.

Allegedly, a neighbor produced a hammer and the suspect, who is a CPL holder, produced a gun and fired shots. The suspect’s 20-month-old daughter who was seated in a gray Dodge Charger was struck in the hip.

"I don't know if I can adequately find the words for the feeling I get when anytime a child or an innocent person of any sort, is the victim of violence," said Capt. Ian Severy, Detroit police. "It is disgusting, quite frankly."

Both the handgun and hammer were recovered. The child was taken to a local hospital for medical attention.

Anyone with information is asked to please call Detroit Police Department’s Tenth Precinct at 313-596-1040,

It's Krystal Clear - she's in the Hall of Shame

Meet Krystal. She runs a tax business, a CPR school, a real estate business - all the gigs one needs to claim the title of rock-solid entrepreneur.

But Krystal is about to get shattered.

In a world where TV broadcast puns can hurt, it's Krystal's financial dealings and swindlings around Metro Detroit that have hurt most of all.

"There's a bunch of people that are telling me you're ripping them off," asks intrepid FOX 2 reporter Rob Wolcheck.

Meet Krystal. She runs a tax business, a CPR school, a real estate business. It might appear Krystal is a rock solid entrepreneur - but Krystal is about to get shattered.

"There's a bunch of people telling you I'm ripping them off that's lying!" Krystal responds.

She's jipped homeowners out of faulty real estate management. She's filed people's taxes without any personal information, drawing concerns from the IRS. She's even advertised homes for purchase that were definitely not for purchase.

Want to learn how she earns her newest accolade as a member of the Hall of Shame? Watch and more here.

One dead, another injured crash on Schaefer

Detroit police have taken a 25-year-old man into custody after he rear-ended two motorcycles stopped in the road on Schaefer. 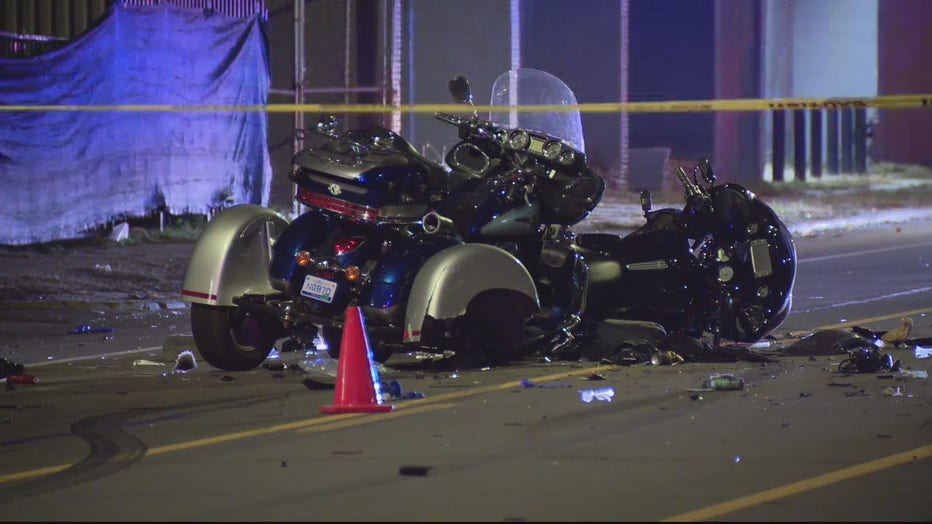 The crash totaled the motorcycles and both victims were transported to the hospital. The 53-year-old woman died while the 46-year-old is in critical condition.

Police are asking for any information from people who saw the crash as they continue to investigate.

Lorenzo Brabo, a 20-year-old was charged in connection to the deaths of three people, two brothers and a teenager who overdosed on fentanyl and whose bodies were discovered July 29 in an Auburn Hills hotel.

The victims included Caleb Kiessling, 20, his brother Kyler, 18 who were both from Rochester Hills, and a 17-year-old girl from Auburn Hills.

“Whoever put those drugs together, that is murder," said Rebecca Kiessling, mother to the two brothers. “That is considered a capital offense, meaning life in prison - three counts.

At the Baymont Hotel in Auburn Hills, two brothers and a teen girl were found dead July 29 of apparent overdoses.

However, Rebecca believes her sons were after Percocet, a less potent opioid, and were given fentanyl instead.

Appearing in court Monday, Brabo was arrested after several other teens informed police that he was a regular supplier of fentanyl.

He'll be back in court later in November.

A 29-year-old Belleville woman has been charged with killing two men working construction on I-94 over the weekend.

Believed to be under the influence of alcohol, Ryann Danielle Musselman was arraigned in Washtenaw County Court Monday for the crash, which happened on I-94 near Harris Road.

There, Nicholas Andres Sada and Davyon Desmon-Aerealies Rose, both 23, were repairing concrete around 1:40 a.m. Nov. 7 when the crash happened.

"It's unreal, it's not something I am thinking about - how real it is right now," said Danyelle Sada, brother of Nicholas. "I'm always going to think about how he's not with me that will always be the thing, yeah this was fun or I succeeded, but my brother wasn't there to see it."

The Michigan Department of Transportation says Nicholas Sada and Davyon Rose were repairing concrete on I-94 near Harris Road at the time of the crash.

Now while loved ones start to grieve two tremendous losses, Sada says her brother didn't hold grudges. and she plans to follow his example.

"I'm going to need to forgive her," she said. "I have no idea how I just know it's the kind of mistake anyone could have made. I feel like he'd probably forgives the driver too."

The head of the Department of Justice has authorized federal prosecutors to pursue "substantial allegations" of voting irregularities, despite little evidence any occurred.

However, the Trump campaign has launched several lawsuits alleging widescale voter fraud in states like Michigan, Georgia, Arizona, and Pennsylvania. So far, litigation has turned up no proof.

Barr's move has many worried due to the longstanding Department of Justice procedure to avoid litigation that could affect the outcome of an election.

In response to the directive, the department's top election crimes prosecutor quit in protest.

1. If you're driving on Grosse Pointe Boulevard, near Fisher Road, you may notice thousands of white flags lining the lawn of a church. The Christ Church is honoring the 7,640 Michigan deaths linked to COVID-19.
2. Following the shooting death of a 16-year-old on Detroit's east side, police arrested one man and one woman in connection to the alleged murder.
3. Despite the election being over, some believe the vote conclusion was the result of fraud. They'll have seven days to find evidence before the vote is certified.
4. A second-grader in Michigan is hoping to make his fellow students smile with a new book he wrote titled "Going to School is Fun, Staying Home is Too!"

It's going to get to 77 degrees today, consider it your last high-temperature forecast for the foreseeable future. It is November after all and cold is about to settle in.

The last warm day is here!

Temps soar into the 70's again, but a cold front is lurking.

Much at stake as Supreme Court weighs future of 'Obamacare'

When the Supreme Court weighs the fate of "Obamacare," arguments will revolve around arcane points of law like severability -- whether the justices can surgically snip out part of the law and leave the rest.

But what's at stake has real-world consequences for just about every American, as well as the health care industry, a major source of jobs and tax revenues. Whether the Affordable Care Act stays, goes, or is significantly changed will affect the way life is lived in the U.S.

The argument against the law from the Trump administration and conservative states is that the 10-year-old statute was rendered unconstitutional in its entirety when Congress dialed down to zero a penalty on those remaining uninsured.