There was been no word yet on verifying if SE Michigan had any tornados amid Monday's storms but this video from a view in Richmond shows a menacing funnel cloud.

DETROIT (FOX 2) - School closures, power outages, boil advisories, a possible tornado, and at least one death after a teenager made contact with a live wire is what's greeting Metro Detroit Tuesday morning after thunderstorms knocked out electricity for hundreds of thousands of residents.

Wind gusts reaching 70 mph in some places were what contributed to more than 262,000 losing power, according to DTE's outage map. The loss of power wasn't limited to any part of the utility's coverage area.

DTE said on Tuesday that it expects power to be restored to most by Thursday evening.

DTE held a press conference at 2:30 p.m. to provide more information on the outage which they said was due to trees on private property.

DTE President says power to be restored for most by Thursday

DTE is working to restore power to more than 260,000 people after Monday's severe weather. But the company president says their first step is to make sure the public is safe around power lines.

Among the casualties from the severe weather was a 14-year-old who was killed by a live wire in Monroe. According to police, she touched a power line thinking it was a stick and was electrocuted. She had been with a friend in their backyard when it happened.

DTE outages in Southeast Michigan - More than 207K without power

DTE Outage Map: How to check and use the map

Dozens of schools around Metro Detroit are closed for loss of power.

For many students returning to class for the first time this week, they'll get their second day of school off due to closures. That includes schools in Rochester, Warren, West Bloomfield, and Waterford.

Western Oakland County was one of the first Southeast Michigan counties to feel the full force of the storm that slammed into the region Monday night. Among the wreckage was loss of power to pumping stations due to DTE equipment malfunctions.

As a result, precautionary boil advisories were issued for Novi, Commerce Township, and Walled Lake after a loss of water pressure was reported by the Great Lakes Water Authority stations nearby.

Many Southeast MIchigan communites in Oakland and Macomb County were already under boil advisories for a separate issue after a water main broke, leading to a disruption of water service for hundreds of thousands of people.

Both DTE and Consumers Energy were dealing with hundreds of thousands of outages by Monday night. Much of the severe weather that moved through Michigan was south of I-69 so while mid-Michigan communities were spared the high winds and damaging rain, Southeast Michigan wasn't so lucky.

The power outages were indiscriminate and covered most of Metro Detroit, stretching as far west as Ingham County, as far north as Arcadia and Imlay City, as well as much of Detroit, and as far south as Dundee in Monroe County. 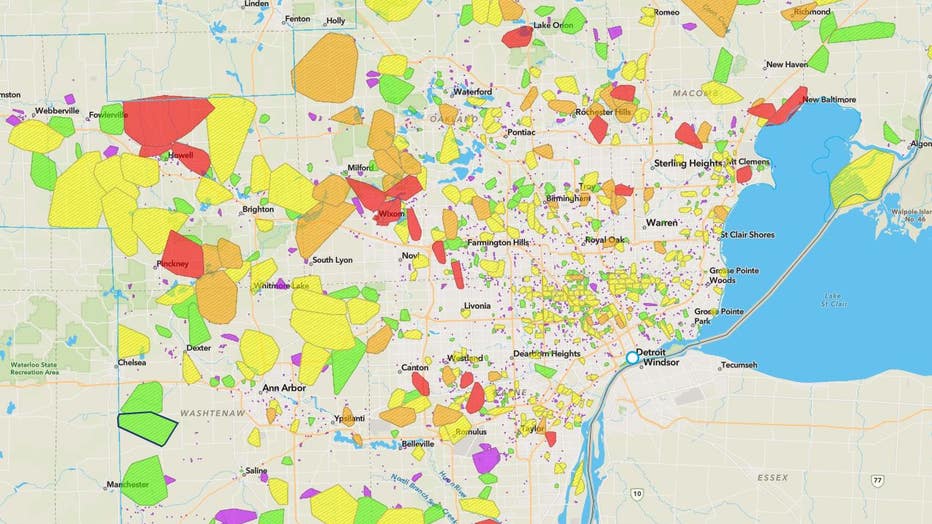 Wind damage was the most reason for most of the outages.

A tornado reportedly touched down in Macomb County during the severe weather, state police said.

According to posts from Michigan State Police's Second District, the city of Richmond had an unconfirmed tornado touch down at approximately 8 p.m., "causing significant wind damage to property as well as a wide-spread power outage."

Local police requested help from nearby responders, which state police responded to by conducting welfare checks, traffic control for blocked roadways, and evaluated the extent of damage.

Amid reports of injuries, a tragic death occurred in Monroe where a 14-year-old girl was killed by a live wire in the 1400 block of Peters Street, according to police.

The young girl touched the power line thinking it was a stick, and was electrocuted.

"Emergency personnel arrived to discover that the female subject was still in contact with the energized electrical line, which fell as a result of passing thunderstorm," police said in a release. "DTE Energy crews were contacted and disconnected the power lines, so emergency workers could attend to the victim. Once the scene was made safe and rescue workers could attend to the victim, it was obvious that she had succumbed to her injuries.

The teen girl touched a downed wire and was electrocuted, according to police.

"Officers on-scene learned that the victim was walking with a friend in the backyard of her residence and believed that they could smell a bonfire.  The victim reached for what she believed was a stick, however, it was the charged electrical line. "