A massive fire that tore through an eatery in midtown burned for several hours before crews were able to get it under control Friday morning.

FRIDAY NEWS HIT - A popular brewpub and longtime restaurant of Midtown Detroit caught fire Friday morning, where flames could be seen shooting into the sky during the blaze.

The Traffic Jam & Snug Brewery was likely a total loss after the fire, which took hours to get under control.

There were several Detroit fire trucks on scene for the fire, located in the 500 block fo Canfield. While there were no injuries, the popular location will likely need to be rebuilt.

"It's sad. It's sad to see any occupied restaurant or any business go this way," said Detroit Battalion Chief Byron Jaracz.

It's not clear what started the fire.

But based on the presence of smoke and debris remaining in the aftermath of the fire, the blaze was massive. Crews were clearing the scene around 6 a.m. 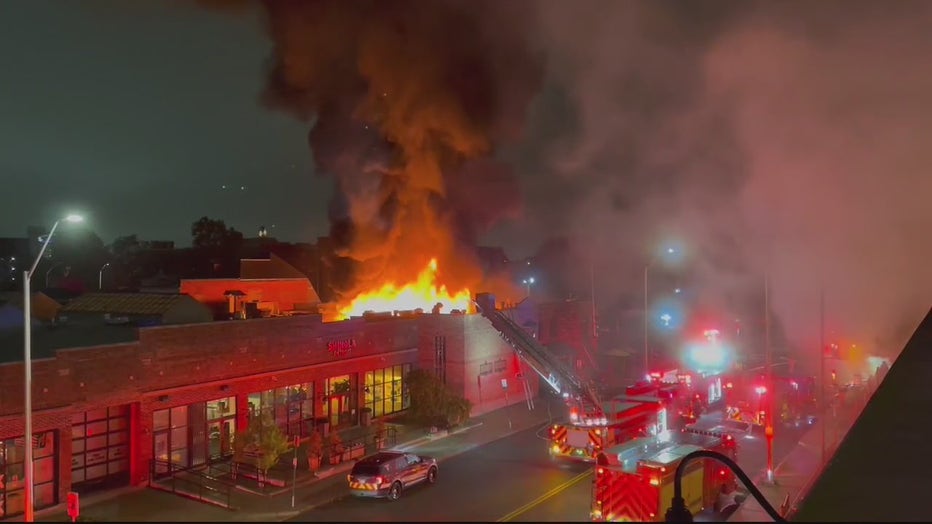 The restaurant has been around since 1965. One of Detroit's "hidden treasures" according to the website, it has an in-house bakery, microbrewery, and an eclectic menu of meals. It was the first brew-pub to open in Michigan.

A political event with an AR-15 in Brownstown Township

At first glance, it looks like a typical flyer for a candidate meet and greet event in Brownstown Township  - but look closer and you see a giveaway in bright red letters. In smaller print it says "Enter to win a Radical Fire Arms AR-15."

The June 5th candidate event and the gun giveaway were planned long before the Texas shooting. But the flyer which is now circulating on social media in light of the deadly mass shooting in Uvalde, Texas, is not sitting well with some.

"I just found that appalling and shocking that people would seek to give out a weapon that was used in many mass shootings," said state Rep. Darrin Camilleri. Including the latest one this week when 19 elementary school children were shot and killed along with two staff members just west of San Antonio.

The organization declined to speak to FOX 2 on camera, but one of the founders told us that while their hearts go out to the people of Texas, they are holding what they say is a lawful event, with several candidates running for state representative, State Senate and U.S. Congress.

The organization in charge of the event, Michigan Leadership Group, is located on Telegraph in Brownstown Township. It is a nonprofit organization whose objective is to build strong conservative leadership in southeast Michigan. The June 5th event organizer says there are no plans to cancel, but is open to discussing with others running the event about whether to continue the AR-15 giveaway.

Car owners have their prized possessions back after they were stolen early Tuesday from Westland businesses. Mark Blaha said three custom vehicles worth a total of $400,000 to $500,000 were stolen from Powerworks Performance. Two of the cars are his, while a Jeep Grand Cherokee belongs to a customer.

Jeff Burgess' Gran Torino was stolen from a nearby business. "They broke the rear window, that’s where they gained access," Burgess said. The men posted photos of their vehicles on social media, and the tips started coming. "We got contacted by some local people in Toledo that have a group that go around looking for stolen vehicles, and they work with Toledo Police Department," Blaha said.

Both men never thought they would see their vehicles again. "The fact that we got them all back, and they’re all in one piece. There’s some damage," Blaha said. "Whatever damage there is, I can definitely fix." Police said the investigation is ongoing, and no arrests have been made.

Burgess and Blaha said they are making changes to protect their vehicles in the future. "I've got alarm companies coming here tonight. We’re going to do some preventative things on the vehicles," Blaha said. Burgess said his Gran Torino will now be stored somewhere else.

A Detroit man accused of threatening to kill a Macomb County judge is facing charges.

According to authorities, Marion Williams Richardson, 75, threatened to go to the home of Judge Douglas Shepherd, who serves at the 41-A District Court in Shelby Township, and kill him. The threat was made via a phone call to court staff this week.

The case was referred to Michigan Attorney General Dana Nessel, who charged Richardson with one count of communicating a false threat of terrorism and one count of malicious use of a telecommunications service.

"I refuse to disregard threats made against elected officials and their families," Nessel said.  "Threatening the safety of a member of the bench is inexcusable, and I will not hesitate to use the resources of my office to prosecute such crimes."

An 18-year-old Shelby Township man is accused of making threats against a Texas school the same day a gunman opened fired in an Uvalde elementary, killing 19 students and two teachers. Joseph Vojnoski is charged with making a terrorist threat or false report of terrorism and using a computer to commit a crime.

The same day a gunman killed 19 students and two teachers at Robb Elementary School in Uvalde, Texas, a Shelby Township man is accused of making social media threats against an unspecified Texas school.

Texas Rangers reached out to Shelby Township police about the threats to shoot and killed students at an unspecified school after they traced them to Vojnoski's home Wednesday. He was arrested and appeared in court Thursday. Vojnoski’s attorney Paul Tafelski tried to argue that many threats like this aren’t credible. However, prosecutors pushed back, saying, "This is the most credible threat we have come across in Macomb County to date."

His attorney also argued that he wasn't a threat to the public. Police also removed weapons from the home where Vojnoski’ lives. His attorney said he lives with his parents, and the guns belonged to his father.

"He does not own any guns even though he is 18. Although there were weapons found in the house, they were in a secure gun safe," Tafelski said. Vojnoski was given a $200,000 bond. If he posts bond, he must be confined to his home, can have no contact with schools, and cannot use social media. A mental health assessment was also ordered.

Scattered rain and thunderstorms Friday will be the only rain Southeast Michigan sees this holiday weekend, although there is a stray morning rain chance Sunday. Temperatures will be in the 70s today before rising in the 80s Saturday.

Scattered rain and thunderstorms are in our forecast this afternoon with highs in the mid 70s. We're in the 70s on Saturday under partly cloudy skies with 80s on the way by Sunday along with a stray morning rain chance. We're in the mid 80s by Memorial Day with near 90s by Tuesday and Wednesday.

A bipartisan group of senators is considering how Congress should respond to the horrific shooting of 19 children and two teachers in Uvalde, Texas, restarting gun control talks that have broken down many times before.

Aware of the difficulty of their task, the Democrats and Republicans say they hope to find agreement on legislation that could help reduce the number of mass shootings in the United States. The Uvalde shooting came 10 days after a gunman opened fire in a racist attack killing Black people at a Buffalo, New York, supermarket.

Senators have narrowed the discussion to a few ideas, some of them based on legislation they have been working on for years, such as expanded background checks or red flag laws that keep guns away from people who could do harm. Led by Democratic Sen. Chris Murphy of Connecticut, the group of 10 is hoping to negotiate a proposal over the Senate’s upcoming recess and have it ready for a vote at the beginning of June.